Jesus died from fatal bleeding, after dislocating his shoulder carrying the cross to his own crucifixion, a retired neurologist has claimed.

The Bible details how Jesus fell while carrying the cross, before his side was later pierced by a Roman soldier’s spear, causing ‘blood and water’ to shoot out.

According to pious legend, St Bernard of Clairvaux asked Jesus which was the greatest unrecorded suffering of his Passion.

Jesus replied: ‘I had on my shoulder, while I bore my cross on the way of sorrows, a grievous wound that was more painful than the others and which is not recorded by men.’

Scholars agree that Jesus most likely dislocated his right shoulder when he fell, carrying the cross.

However, doctor-turned-priest Patrick Pullicino believes that he may have ultimately been killed by complexities linked to this wound.

Pullicino also believes he can explain why, as told in the Gospel of John, ‘blood and water’ poured from Christ’s crucified body.

The Rev. Prof Pullicino, based in London, has written a scientific paper about his theory and published it in the Catholic Medical Quarterly. 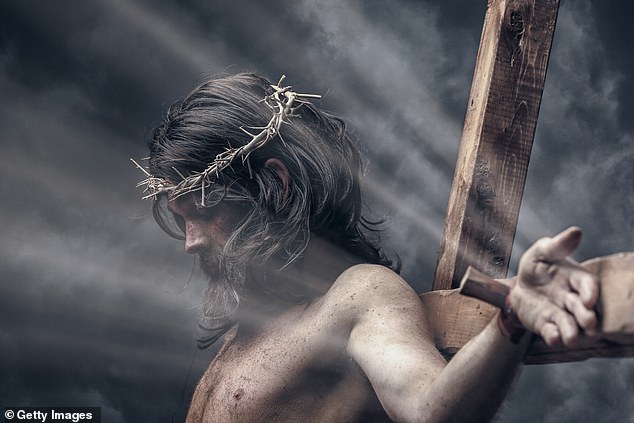 Jesus died of fatal bleeding caused by a dislocated shoulder from carrying the cross, a retired neurologist has claimed

WHAT IS THE TURIN SHROUD?

The Vatican owns the Turin shroud, and hails the relic as an exploration of the ‘darkest mystery of faith’.

But the church has shied away from any definitive statement over whether the shroud – which is supposed to have formed Christ’s burial robe – is real.

The shroud is thought to have travelled widely before it was brought to France in the 14th century by a Crusader.

It was kept in a French convent for years — by nuns who patched it, and where it was damaged by fire.

The shroud was given to the Turin Archbishop in 1578 by the Duke of Savoy and has been kept in the Cathedral ever since.

Scientists have since claimed that contamination over the ages from patches, water damage and fire, was not taken sufficiently into account In 1999, two Israeli scientists said plant pollen found on the shroud supported the view that it comes from the Holy Land.

There have been numerous calls for further testing but the Vatican has always refused.

He analysed work carried out by forensic and medical experts on the Shroud of Turin, also known as the Holy Shroud, within which Jesus was wrapped after the crucifixion.

For centuries, people have argued about the authenticity of the shroud, which has been preserved since 1578 in the royal chapel of the cathedral of San Giovanni Battista in Turin, Italy.

One of the most controversial relics in the Christian world, it bears the faint image of a man whose body appears to have nail wounds to the wrists and feet.

Some believe it to be a physical link to Jesus of Nazareth. For others, however, it is nothing more than an elaborate forgery.

In 1988, radiocarbon tests on samples of the shroud dated the cloth to the Middle Ages, between 1260 and 1390, but more recent studies in the 2010s dispute this claim, and instead argue that the linen sheet dates from the time of Jesus.

Looking at the faint imprint on the shroud, which appears to show a figure bearing the wounds of crucifixion, Rev Prof Pullicino said the position of the man’s dislocated shoulder was significant.

He said it was pulled so far out of its socket that the right hand stretches 4 inches (10cm) lower than the left.

When stretched out for crucifixion like this, Rev Prof Pullicino believes it would cause the subclavian artery – a pair of large arteries in the thorax that supply blood to the head, neck, shoulder and arms – to rupture.

This would in turn cause huge internal bleeding, he said, and ultimately result in a person’s death.

Not only that, but around three pints of blood would fill the cavity between the ribcage and the lung, which he argues explains why blood spurted out of Jesus when he was stabbed with the spear.

The water, Rev Prof Pullicino claimed, was likely cerebrospinal fluid, which has a translucent appearance.

‘Because of this right arm stretching, the right subclavian/axillary artery was also subjected to stretch, as it was one of the only remaining intact structures connecting the body and the right arm,’ he said, according to the Telegraph.

‘This would cause the stretched subclavian artery to move across the rib surface with each breath and its underside would be subject to friction.

‘This paper postulates that over the course of three hours, the subclavian artery became abraded, injured and its wall attenuated until finally the artery ruptured and profuse bleeding ensued.’

CRUCIFIXION EXPLAINED: HOW PAINFUL WAS IT AND WHEN WAS IT USED AS CAPITAL PUNISHMENT? 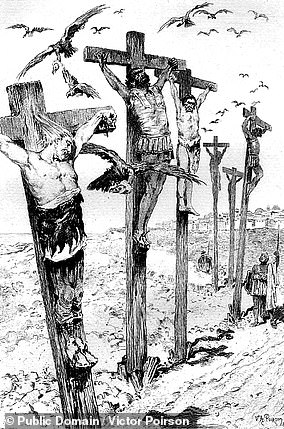 Pictured: a 19th century illustration of rebels being crucified by the Carthaginians in 283 BC

Crucifixion was an ancient method of punishment — commonly associated with the Romans but also practiced by the Carthaginians, Macedonians and the Persians.

The name for the procedure literally means ‘fixed to a cross’ and it is the etymological root of the word ‘excruciating’ — literally a pain so bad it is as if it were ‘out of crucifying’.

A victim would eventually die from asphyxiation or exhaustion and it was long, drawn-out, and painful.

The act was used to publicly humiliate slaves and criminals — with the goal of dissuading witnesses from perpetrating similar acts — as well as an execution method employed on  individuals of very low status or those whose crime was against the state.

This is the reason given in the Gospels for Jesus’ crucifixion.

Crucifixion could be carried out in a number of ways.

In Christian tradition, nailing the limbs to the wood of the cross is assumed, with debate centring on whether nails would pierce hands or the more structurally sound wrists.

But Romans did not always nail crucifixion victims to their crosses, and instead sometimes tied them in place with rope.

Other forms of the practice included victims being tied to a tree — or even impaled on a stake.

In fact, the Roman philosopher Seneca the Younger one wrote of seeing crosses ‘not just of one kind but made in many different ways: some have their victims with head down to the ground; some impale their private parts; others stretch out their arms on the gibbet.’

Until recently the only archaeological evidence for the practice of nailing crucifixion victims is an ankle bone from the tomb of Jehohanan, a man executed in the first century CE.

Why is there so little evidence of it?

The victims were normally criminals and their bodies were often thrown into rubbish dumps meaning archaeologists never see their bones.

Identification is made even more difficult by scratch marks from scavenging animals.

The nails were widely believe to have magical properties.

This meant they were rarely left in the victim’s heel and the holes they left might be mistaken for puncture marks.

Most of the damage was largely on soft-tissue so damage to the bone may have not been that significant.

Finally, wooden crosses often don’t survive as they degrade or end up being re-used.