Treasurer Josh Frydenberg is eligible to sit in Parliament, a trio of judges has ruled, averting a crisis for the Morrison government as it prepares a second stimulus package to counter the economic fallout from the coronavirus pandemic.

In a judgment on Tuesday afternoon, the Federal Court – Chief Justice James Allsop and Justices Susan Kenny and Alan Robertson, sitting as the Court of Disputed Returns – dismissed a challenge to Mr Frydenberg's eligibility brought by a constituent in his Victorian electorate of Kooyong. 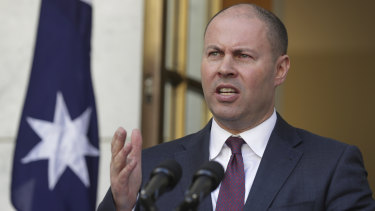 Michael Staindl alleged the Treasurer was disqualified from sitting in federal Parliament under section 44(i) of the Commonwealth Constitution on the basis he was a Hungarian citizen by descent, a claim Mr Frydenberg denied.

Under the Constitution, a person who is "a citizen … of a foreign power" is ineligible to sit in the Australian Parliament.

The court said "Mr Frydenberg has proved that he was not, and never has been, a citizen of Hungary".

"That conclusion is confirmed by the contemporaneous view of the current government of Hungary," it said.

Mr Frydenberg has previously said he was not entitled to dual citizenship because his Budapest-born grandparents and their three young daughters, including his mother Erica, were stateless when they fled Hungary's communist regime in 1949. The Strausz family arrived in Australia in 1950.

The court said it accepted "that the reality in Hungarian law in 1949 … was that by leaving Hungary the Strausz family brought an end to their Hungarian citizenship".

"There was evidence of the clearest kind from an Hungarian lawyer of standing … that the bonds and status of citizenship were destroyed upon leaving Hungary," the court said.

"There was evidence from another [expert] …. to the same effect. We accept that evidence. There is no evidence sufficient to raise a rational possibility that citizenship was not destroyed."

The court painted a vivid picutre of "a family [leaving] … their country of birth for a hoped-for future on the other side of the world, leaving the horrors of war, arbitrary massacre, deportation, religious hatred, arbitrary power, as class enemies of the people".

If the court challenge had been successful, it would have triggered a byelection in Kooyong.

In a separate decision in December, the Federal Court sitting as the Court of Disputed Returns ruled Mr Frydenberg was validly elected in May last year after his election win was challenged by a rival for his seat, Oliver Yates.

Mr Yates had argued Chinese-language signs telling voters in Kooyong that the "correct" way to vote was to put the Liberal Party first were likely to mislead or deceive voters.

The court found there was "no real chance" the result of the election result was affected by the signs.

The court also said there was "no basis" to find Mr Frydenberg knew the English translation of the signs or authorised them.