Kate’s sweet tribute to her children! Duchess of Cambridge wears a £495 gold necklace by British jewellery designer Daniella Draper with the initials G, C and L during final day of Scotland tour with Prince William

Kate Middleton paid a sweet tribute to her children today with a personalised charm necklace bearing their initials.

The Duchess of Cambridge, 39, wore the delicate chain by British jewellery designer Daniella Draper, priced at £495, during her and Prince William’s final day of engagements in Scotland.

The piece, made from recycled yellow gold, featured the letters G, C and L – representing Prince George, seven, Princess Charlotte, six, and Prince Louis, two, who did not join their parents on the tour. 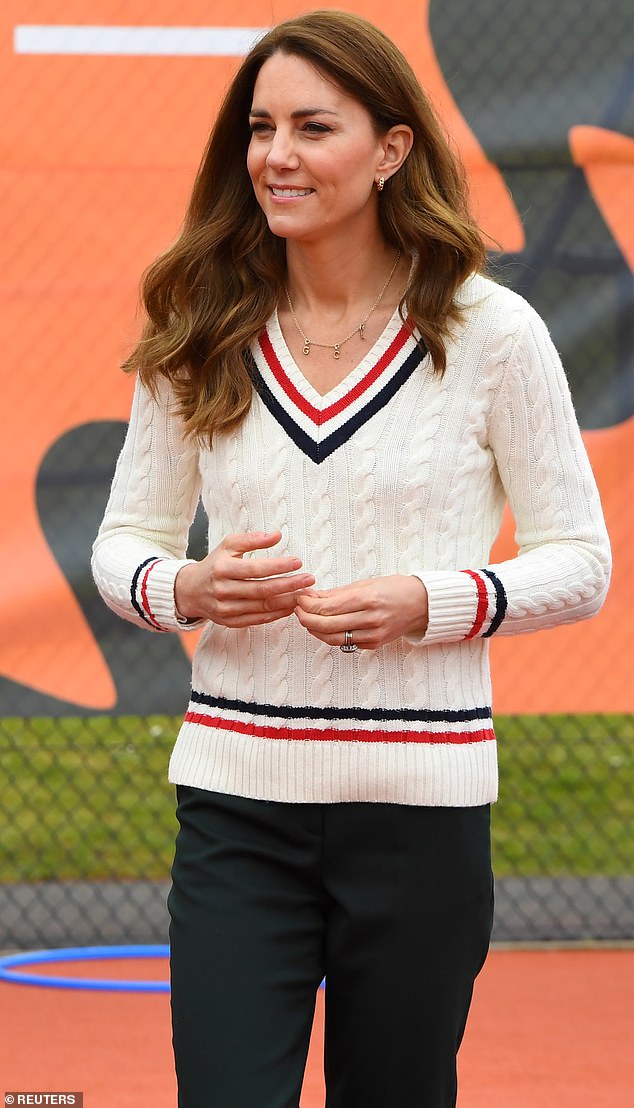 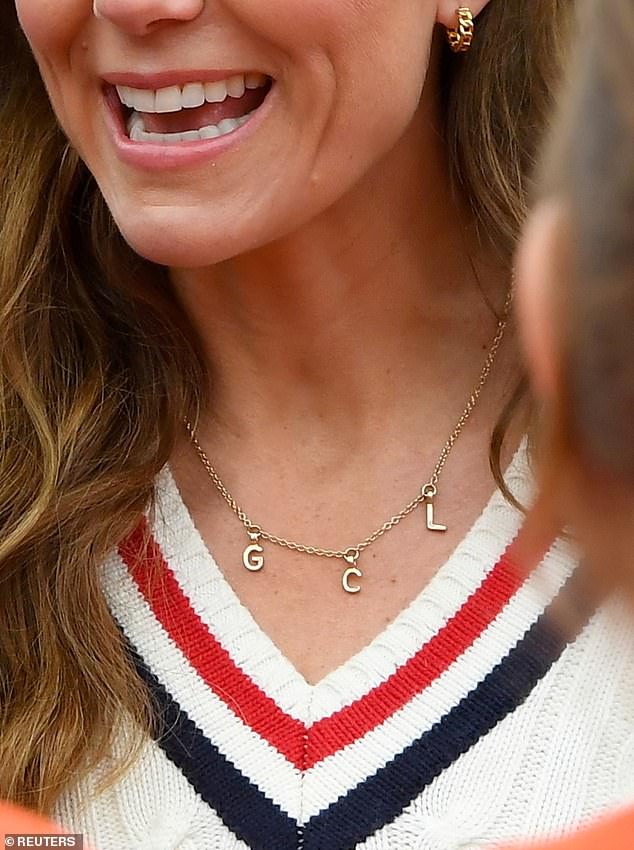 The Duchess of Cambridge, 39, wore the delicate chain by British jewellery designer Daniella Draper, priced at £495, during her and Prince William’s final day of engagements in Scotland

The necklace is one of several Kate has in her collection which pay homage to her three children, helping her keep them close to her heart – and she’s clearly a fan of Daniella Draper.

She also owns the £1,070 ‘Personalised Gold Midnight Moon Necklace’, which is engraved with the letters ‘G, L, C’ and a trio of stars.

Kate wore this piece during a visit to Cardiff in January last year to launch a landmark survey on early childhood development.

Online, the product description reads: ‘The moon is universally representing the rhythm of time as it embodies the cycle. The phases of the moon symbolise immortality, eternity and enlightenment.’

Daniella Draper, who hails from Cleethorpes, Lincolnshire, previously revealed her fledgling business got a lucky break when she was 21, when Kate Moss was photographed wearing an ‘armful’ of her silver bangles. 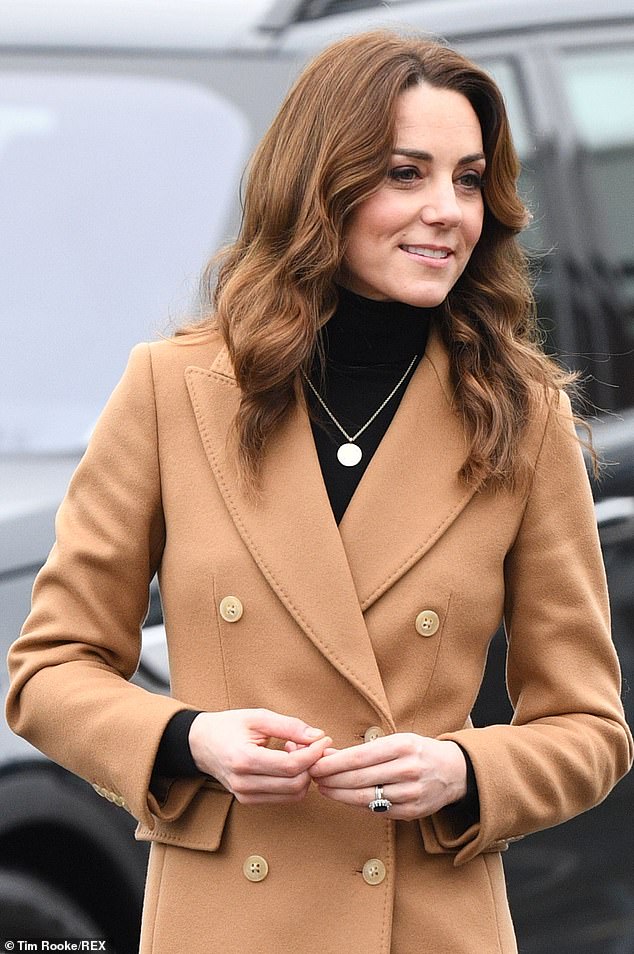 Kate Middleton, 38, (pictured) donned a gold necklace by Daniella Draper featuring a pendant engraved the with initials of her children as she stepped out in Cardiff in January last year 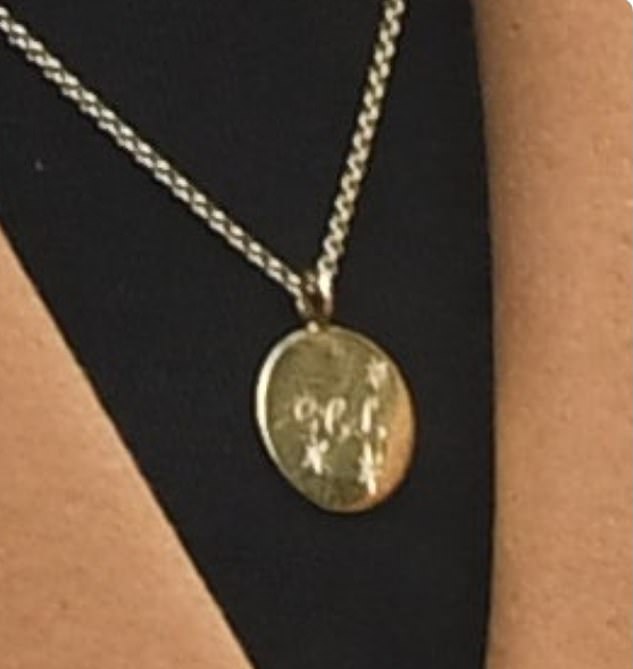 The necklace was engraved with ‘G, L, C’ in tribute to Prince George, Princess Charlotte and Prince Louis – and was complete with a trio of stars (pictured)

Over a decade later and her brand is now popular among the likes of Ellie Goulding, Brooklyn Beckham, Ed Sheeran and Chloe Grace Moretz – and now royalty.

In September last year, Kate debuted another personalised gold necklace, this time from All The Falling Stars, engraved with the letters ‘G, L, C’ in honour of her children, for an engagement at Battersea Park in south west London.

The mother-of-three paired the delicate pendant with another £85 gold necklace from Spells of Love, a simple white T-shirt, and rewore her pair of £29 M&S pink trousers as she met with fellow mothers to discuss the challenges of the Covid-19 pandemic.

Back in February 2014, she was photographed proudly wearing a new necklace that carried a disc engraved with Prince George’s full name – George Alexander Louis – and a heart-shaped charm inscribed with the letter ‘W’ for her husband William.

It’s believed to have been a gift from her sister Pippa which was on sale for £89 from an online boutique. 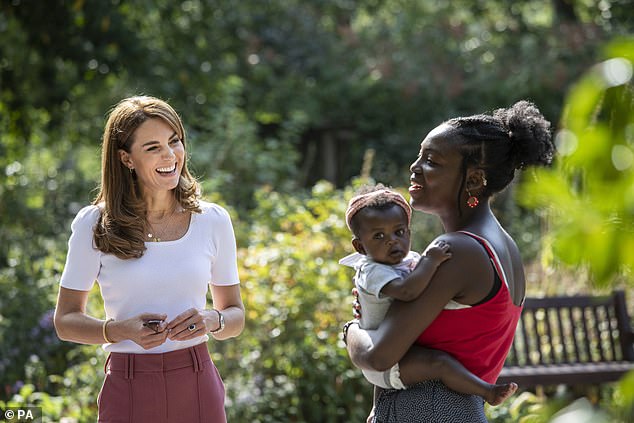 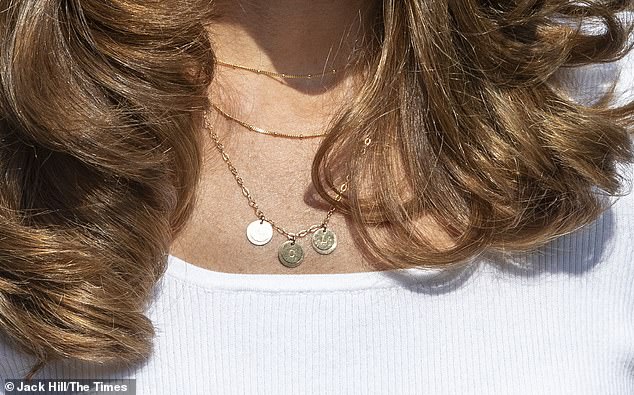 The Duchess of Cambridge opted for the gold necklace engraved with the letters ‘G, L, C’ in honour of her children, Prince George, seven, Princess Charlotte, five, and Prince Louis, two for the outing in Battersea Park

The personal style of necklace is also loved by Meghan Markle, who wore a dainty initial ‘A’ necklace as a nod to her then two-month-old son Archie when she made a surprise appearance at Wimbledon in July 2019.

The Duchess of Sussex also kept husband Prince Harry and Archie close-by during her first trip away from her family in New York that year.

The mother-of-one wore a gold necklace adorned with the letters ‘H’ and ‘A’ while watching her friend Serena Williams compete against Canadian Bianca Andreescu in the US tennis championship – and was pictured fiddling with her necklace as the game heated up. 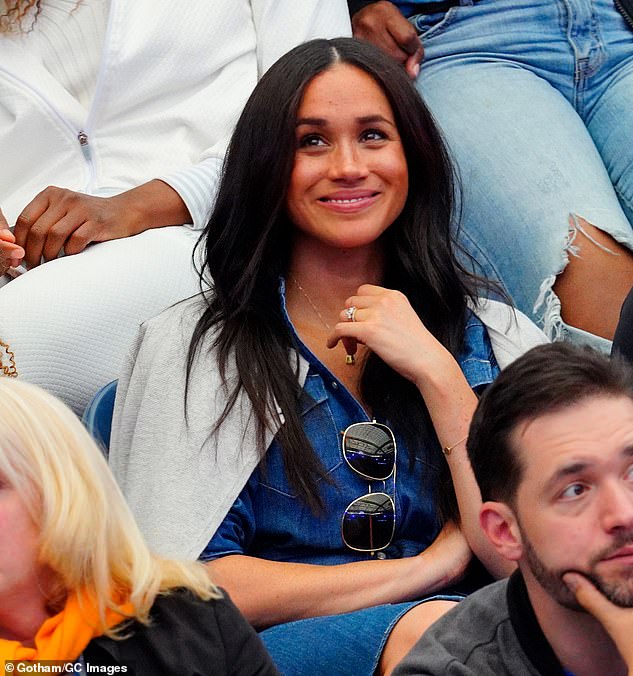 Meghan Markle was seen wearing a gold necklace embellished with the initials ‘H’ and ‘A’ in honour of Prince Harry and their son Archie Harrison Mountbatten-Windsor, then four months, during her first solo trip since becoming a mother in September 2019 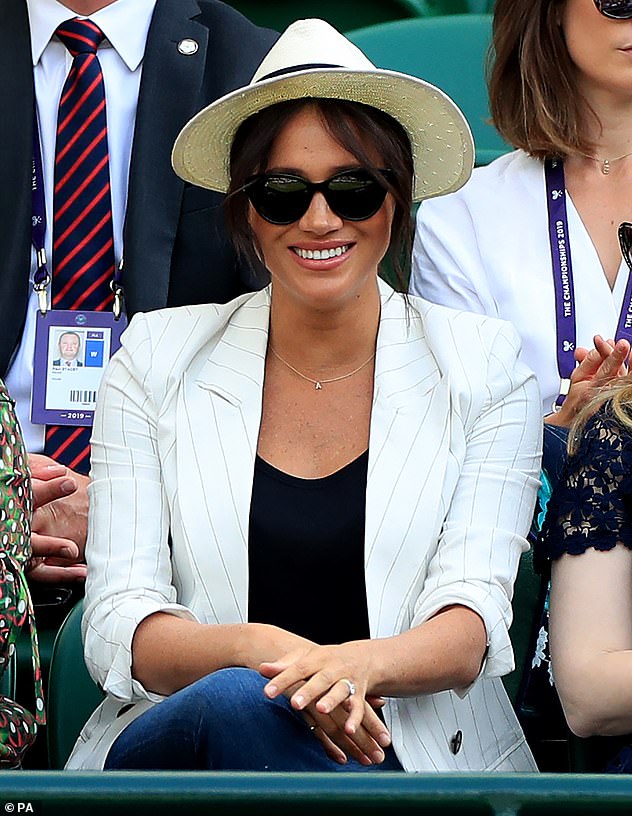 Today Kate and Prince William met children from Canal View Primary School on a visit to Craiglockhart Tennis Centre and heard more about the LTA Youth Programme and the work of the Lawn Tennis Association, of which the Duchess is patron.

They both took part in a friendly game of doubles, with Kate running and leaning to reach the ball at points. The royal mother-of-three also offered pointers to the youngsters.

They also spent time with teenagers planting sunflowers as part of their Duke of Edinburgh Award.

Prince William and Kate will return to London later today after spending a week in Scotland. The visit is part of a broader royal charm offensive to help persuade Scotland to resist the demands of nationalists for independence.