Birds are breeding, frog numbers are jumping and fish are spawning up and down the more than one million square kilometres of Australia’s biggest inland river system.

The Murray Darling Basin is bouncing back and the fresh flush coincides with new federal laws to empower a Commonwealth inspector-general of water compliance to investigate agencies, governments and private irrigators. 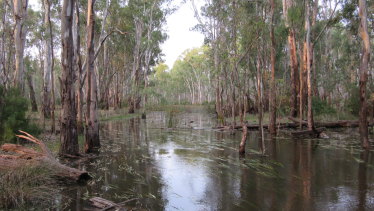 Consistent rain has come to stay for more than a year and dams are filling up. Many regions in the Basin experienced intense drought from 2017 until 2020.

But now most irrigation towns are eying two decent harvests in a row after production all but halted in major industries of cotton, cereals and horticulture – with the notable exception of the western Darling Downs in Queensland, which is still crying out for rain.

Interim Commonwealth environmental water holder Hilton Taylor heads an agency responsible for using stored water to irrigate the environment. He said the northern Basin had seen the most dramatic shift, where the most severe drought stopped the rivers flowing and left forests of dead timber haunting the banks.

“There are many layers to the recovery – the response in the communities and the town and the people, they just look so different as a consequence of the drought-breaking. Also, the rivers running, fish breeding, the whole atmosphere in that northern basin has changed. But it’s far from fully recovered,” he said.

“Another thing that happened is some natural overbank flows in the Barmah-Millewa Forest. Anabranches and flood runners through those forests are nutrient-rich and when the water passes through the forest it picks up a heap of fish food and puts it back into the river system. That’s like fertilising your paddock.”

Eulimbah swamp on the Murrumbidgee River was filled with flows directed by the Commonwealth Environmental Water Office, spurring breeding among 18,000 straw-necked and glossy ibis. Along the river, southern bell frogs have been recorded in numbers not seen since the millennium drought, a decade of dry which ended in 2010.

Murray cod are spawning on the Macquarie River in NSW and thankfully also the Lower Darling, where their population was decimated in 2019. In Victoria, golden perch are spawning in the Goulburn River, as are Silver Perch which are also doing well in the mighty Murray.

The return to decent water flows in most rivers coincides with new laws to empower a so-called “tough cop” – the Commonwealth inspector-general of water compliance. 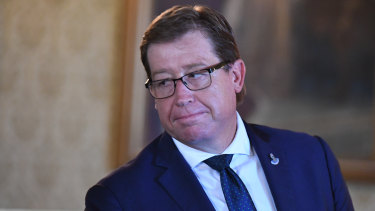 Former NSW Nationals leader Troy Grant was appointed to the role last December and will monitor compliance of governments, federal agencies and farmers who are all required to work with the Commonwealth’s plan and recover billions of litres of water from irrigators to return it to environmental flows for the river system.

But the former Dubbo MP, who served as police minister for four years, believes his role in compliance can help boost faith in the policy. The plan is viewed in the bush with deep suspicion, with communities fearing green-tinged bureaucrats will shrink regional economies by focusing too heavily on environmental water recovery.

“I’ve lived and worked my whole life in the basin. If there is anything about country people they just want it straight,” Mr Grant said. “I think agencies have fundamentally failed in their communications with them and talked at them not with them.”

But making his job harder is an internecine stoush between irrigators in southern NSW and Victoria who make accusations of inequitable water allocations about the cotton-dominated farm sector in northern NSW and Queensland.

“It’s based on misunderstanding and myths and we have to bust them and rebuild trust,” Mr Grant said.