With the worst of the COVID crisis behind us – or so we thought – radio listeners in Melbourne were ready to settle in for some easy listening in the third survey period of the year.

Talkback station 3AW (owned by Nine Entertainment Co, publisher of The Age) shed 1.3 points across all days and timeslots, dropping from a 16.9 per cent share of the radio listening market to 15.6 per cent, though still the leader by a comfortable margin from second-placed Gold, which dropped slightly (0.2 points) to an 11.1 per cent share. 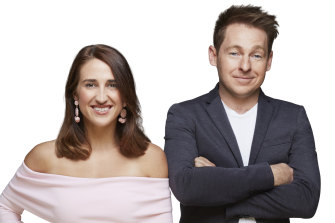 Going out on a high: KIIS FM Melbourne’s breakfast presenters Jase and PJ.

The other major talk station, ABC Melbourne, gained slightly, adding 0.2 points for an 8.8 per cent share, the third highest of any station in Melbourne. The breakfast slot helmed by Sammy J lifted to 11.1 per cent (up 0.4 points), while Virginia Trioli’s mornings show dropped by the same margin, to 9.1 per cent.

Their head-to-head rivals on 3AW both lost share, with Ross Stevenson and Russel Howcroft shedding 1.4 points to a still-dominant 20.1 per cent, while Neil Mitchell dropped a point to finish with an 18.5 per cent share.

Where did those listeners go? Well, with a relative dearth of catastrophes to keep them tuned to the news, it seems many have opted for the music and comedic chat offerings over on the FM band, with KIIS being the big winner, closely followed by Fox and Nova.

KIIS was up 0.9 points across the week, led by a 1.8-point lift enjoyed by breakfast hosts Jase and PJ (up from 5.6 per cent to 7.4). That was the single biggest lift enjoyed by any presenting team across the survey, which covers the period from February 28 to May 22, minus a two-week Easter holiday break from April 3-18.

In terms of audience numbers, that represented a lift of 33 per cent, as the average number of listeners tuning in to KIIS from 5.30am to 9am weekdays rose from 45,000 to 60,000. Many were perhaps drawn by the fact that Polly “PJ” Harding is leaving the show in late June to return to New Zealand. In fact, she is already there, and has been broadcasting from a local radio station in Masterton in the North Island since April.

Nova and Fox both lifted to 7.8 per cent share across the week, an increase of 0.7 points for the former and 0.6 for the latter.

Across the board, radio audiences remain steady, with an average 548,000 people listening at any one time. That’s down from 554,000 last survey, but a decrease of a far more substantial 65,000 from the peak audience average of 613,000 people in survey 6 (July 26 to September 19) last year, at the height of Melbourne’s COVID lockdown.

Well, it had. The next survey may well put the lie to that, as Melbourne once again grapples with the fear, uncertainty and appetite for updates that made the city tune into talk radio in record numbers last year.