Shocking footage has revealed the blood-curdling moment air ambulance crew straightened a climber’s leg after it was crushed by a fridge-sized boulder.

In tonight’s episode of Helicopter ER, veterinary surgeon and experienced climber Becky, from the UK, can be heard screaming in pain after falling victim to a freak climbing accident while enjoying her favourite pass time.

‘An enormous boulder fell on top of me and crushed my leg,’ she says, as the air ambulance rushes to her aid.

The boulder that hit Becky weighed more than tonne, and the damage to her leg is extensive. As such, getting her off the stony scree quickly is top priority. 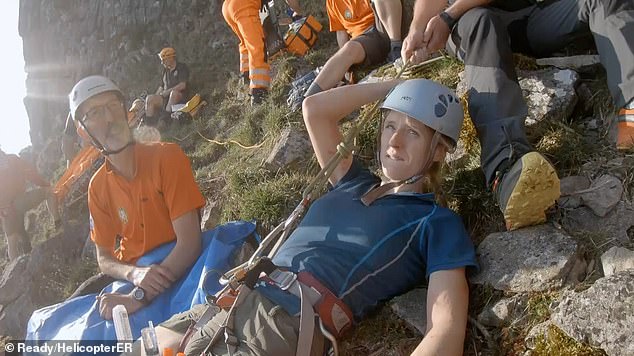 Becky (pictured shortly after the freak accident), from the UK, recalls the moment her leg is straightened by ambulance crew after it was crushed by a fridge-sized boulder in tonight’s episode of Really’s Helicopter ER 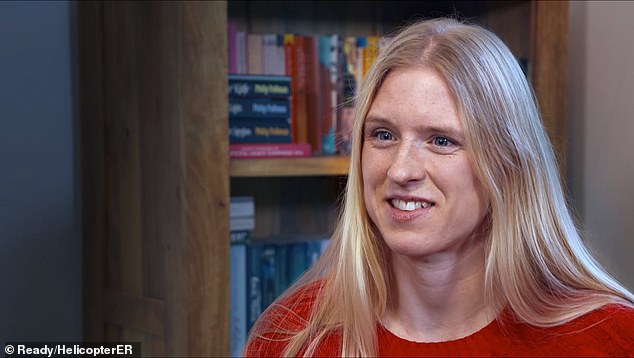 The experienced climber (pictured) says she was ‘lucky’ to still be wearing her helmet when she rolled down the hill, so she got a black eye but didn’t hurt her head at all

The rock faces of Yorkshire are a playground for climbers and, in more usual circumstances, hundreds of people around the country spend their weekend pitting their skills against the terrain of the peak district and dales.

But every year, an unlucky few need the assistance of the air ambulance – and in this instance, it was Becky.

‘In the north of Yorkshire, we’ve got huge areas of sparse hills and moorland that people love to explore,’ pilot Mark explains. ‘But it’s quite easy to lose your footing, fall, and break a leg or worse.’

As Becky finds herself lying at the foot of the cliff with a severely broken leg, the air ambulance crew hatch a plan to get her into the helicopter and off to hospital as soon as possible. 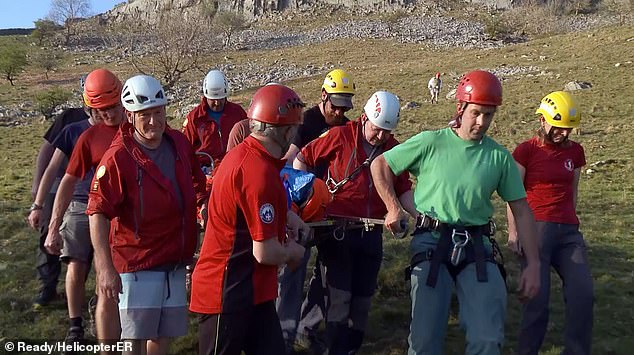 The boulder that hit Becky weighed more than tonne, and the damage to her leg is extensive (pictured, being carried off the moorland) 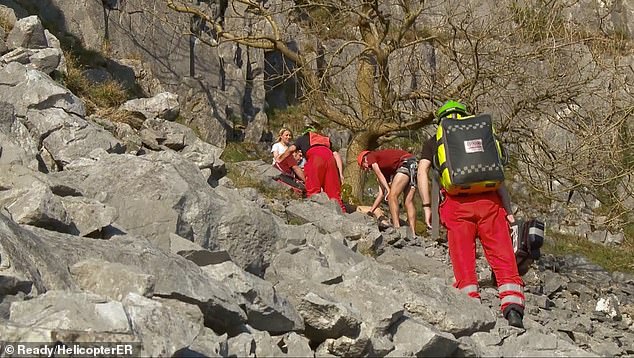 Becky later learns that she suffered a staggering eight spiral fractures in her right leg. Pictured, shortly after the freak accident

Giving her some ketamine to ease the pain, the crew set about straightening her leg and moving her onto a stretcher.

Mountain rescue are also quickly on the scene to offer assistance and, with Becky a regular climber in the area, the Rescue team also know their patient.

Keeping her talking as the paramedics work, one team member quips ‘next time you’re treating one of your cattle now, you’ll know the feeling won’t you?’

Still in good spirits, Becky jokes ‘well I’d just shoot them if they did this!’ After a short while, the drugs quickly take effect, and Becky becomes drowsy.

‘Oh wow, I feel like I’m totally high, oh my goodness!’ she exclaims.

Then, as the paramedics straighten Becky’s broken leg, she lets out an almighty, blood-curdling scream as the pain becomes too much to for her to bear.

Thankfully, the relief once her leg is straight is almost immediate and once Becky’s on the stretcher, the ambulance and Mountain Rescue crew expertly negotiate the tricky terrain and get her aboard the helicopter.

They then fly across the county border to Preston’s Major Trauma Unit where a surgeon is on standby. 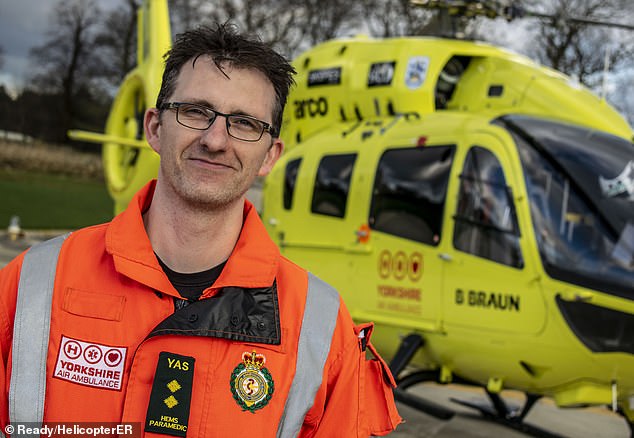 X-rays reveal that Becky suffered a staggering eight spiral fractures in her right leg. Surgeons are forced to insert a titanium rod into the bone, and it’s three months before she is fit to return to work.

It’s been a traumatic experience for Becky, and speaking after returning to work, she recounts the events of that day.

‘A big square section of rock just fell towards me and I don’t really remember falling, but I remember rolling like a ragdoll down this stony hill,’ she says. ‘I just kept rolling.’

‘I remember getting faster when I was rolling, and I also remember being really acutely aware of this massive, loud fridge-sized boulder coming behind me.’

Reflecting on what happened, Becky is grateful to have only sustained a broken leg.

‘I was so lucky. I was lucky I was still wearing my helmet when I rolled down the hill, so I got a black eye but I didn’t hurt my head at all,’ she says. ‘If it had hit a child or anyone else it could have easily have killed someone it was so big.’