Earlier this week, I came out on social media. My name's Angela and I am a coronavirus food prepper. 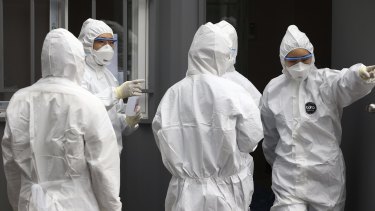 I'd been carefully keeping this a deep, dark, super-embarrassing secret. I thought I was the only one gripped by paranoia, surrounded as I was by people repeating the mantra: "Flu kills more people each year!" But then my friend Mel boldly admitted on Facebook: "I've given in to my primal urge to stock up in case of a coronavirus outbreak." Oh, the relief! Finally, an ally!

And so I confessed all; I'd had 150 tins of food delivered a fortnight ago. Others piled on to the thread, sharing their own dirty secrets – about finding the best paper mask, tracking down industrial-strength anti-bacterial hand gel (fast selling out). "I've bought a litre of hand sanitiser and stocked up on lentils," another reported.

Once I started asking around, it was everywhere – from husbands returning home with the car boot piled high with booze and frozen food to friends "getting a few extra bits, just in case".

I can't take credit for my foresight. Weeks ago, my father, a scientist, told me matter-of-factly: "It's time to start putting away some supplies, in case you need to isolate yourself, and deliveries are stopped." I laughed, but he pointed out that, as I have severe asthma, I'm in an at-risk group – as are my parents, now in their late seventies.

Our freezer is minuscule, just three drawers and, besides, I didn't like the idea of relying on an appliance in an emergency. No, it would have to be tins, and if I was going down that route, I might as well follow this project to its ultimate conclusion. Googling, I arrived at ukpreppersguide.co.uk and found a post entitled "Basic Food Storage for Prepping for Disasters And SHTF". SHTF being "s— hits the fan". I decided a coronavirus outbreak would definitely qualify.

The post told me how much to buy for a month for a family of four. OK, so coronavirus usually only requires a fortnight's isolation, but once you start imagining the end of the world, you get reeeeally cautious.

My brain was beginning to buzz with the imagined urgency of my task. Supposing other people were also doing this right now and the tins would be all sold out by the time I ordered? Supposing deliveries were suspended?

In the end, it took three hours to order 150 cans. The bright side is at least it's cheap – a necessity, given that I ordered 45 cans of meat, 25 cans of fruit, 50 cans of vegetables, 17 tins and packets of beans and chickpeas, 15 bags of rice, eight bags of porridge, five jars of honey, five bottles of anti-bac liquid soap (hand gel was out of stock), a large table salt, giant box of laundry detergent, giant pack of toilet paper.

The delivery man, ungallantly standing watching me scrabbling around, asked: "You stocking up a bit?" Red-faced, I mumbled: "Yes, that kind of thing."

He wasn't convinced. I was far too mortified to admit what I was doing. I realised I looked completely mad. I might as well have told him I was stocking up for a zombie apocalypse.

My husband arrived home during the can tsunami, gawped in alarm, but wisely remained silent. There was food everywhere. I stacked half the cans in the bottom shelf of the food cupboard and the rest in the cupboard under the stairs, and tried to forget about them. The only other person I could face telling was my best friend, who suggested stashing it all in the shed. "Yes, but there's no lock, and the neighbours can see it and I don't have a rifle yet," I half-joked.

Because, for all my contentment at having done something, I realised the whole project smacks of "I'm all right, Jack". Sure, I'd taken care of my family, but what if a neighbour knocked on the door to ask for a can of beans? I still don't know how it would all work.

Meanwhile, the great thing about a hobby like food prepping is: you're never finished. I'm still picking up the odd carton of UHT milk, and now that I've achieved the level of Basic Food Prepper (fist pump), I'm on to working on luxuries: coffee pods, chocolate, wine, some frozen avocados…

Maybe this won't be so bad after all.