NASA scientists have joined others from around the world in a bid to push space agencies to launch a probe to Uranus and Neptune in the 2030s.

At a meeting in the UK experts from NASA Goddard Space Flight Center in Greenbelt, Maryland joined a global pool of researchers to discuss the ice giants.

The Royal Society meeting called for a mission to launch when Neptune, Uranus and Jupiter are in ‘perfect alignment’ for a mission from Earth in the 2030s.

Very little is known about the make up of the two blue planets as the only spacecraft to visit them was Voyager 2, making a fly-by in the 1980s.

Fabio Favata, head of strategy at the European Space Agency says the 2030s is too soon to arrange a mission of this type, it is ‘the day after tomorrow’ in space terms. 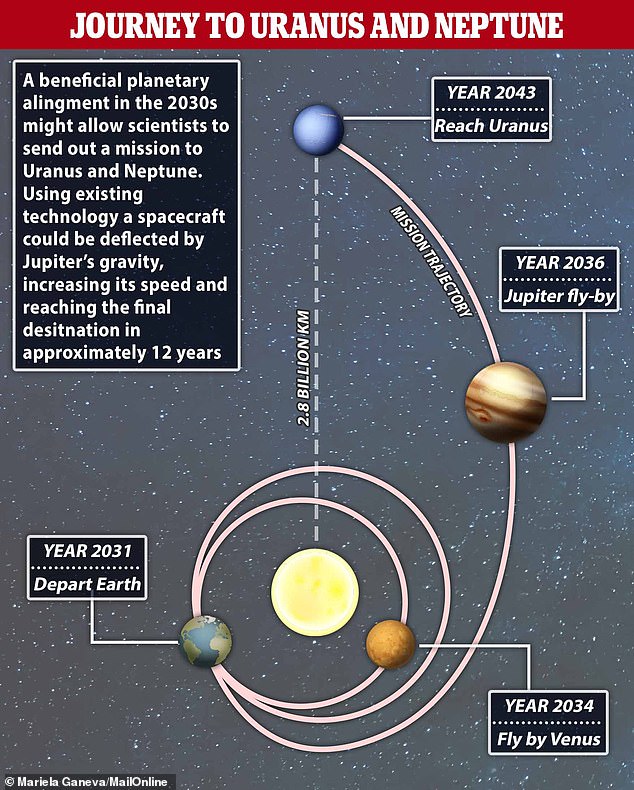 The alignment of Earth, Jupiter, Neptune and Uranus in the 2030s will allow the mission to get to the target planets much faster than if it wasn’t able to slingshot around Jupiter 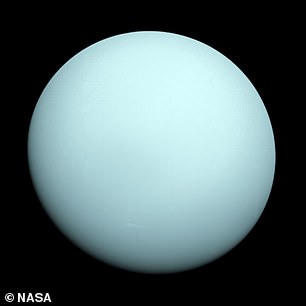 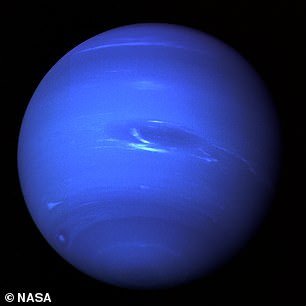 There is increasing pressure from planetary scientists for space agencies to mount a mission to the outermost planets in the solar system.

The meeting at the Royal Society was organised by Simon from Goddard with Leigh Fletcher from the University of Leicester in the UK.

Fletcher told the meeting that a mission to either Neptune or Uranus should include going into orbit as well as probing the atmosphere. 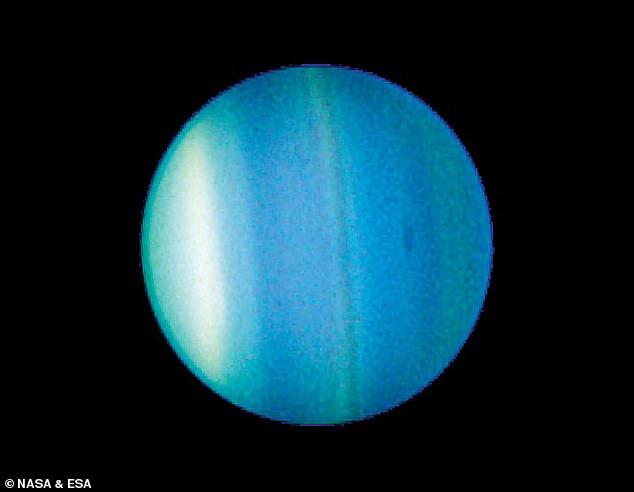 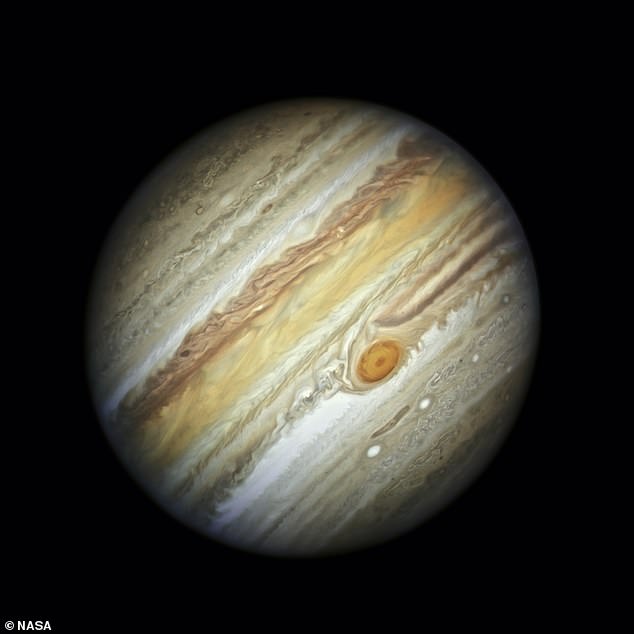 He said it could also include a probe sent to one of the moons of the giant worlds in the same way Cassini–Huygens did for Saturn.

Launching the probes in the 2030s makes sense due to the fact they will receive a boost from Jupiter as it is ‘perfectly aligned’ with Neptune and Uranus.

The rare celestial alignment would allow the spacecraft to slingshot around Jupiter to build up speed and reduce the time it takes to reach the outer worlds.

Uranus was discovered by William Herschel in 1781 and is named after the Greek god of the sky Ouranos. 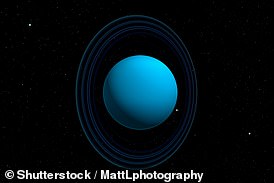 Uranus has a system of rings around it

It is 1.84 billion miles from the Sun and orbits every 84 years.

It turns on its axis once every 17 hours and 14 minutes.

It has the coldest temperatures of any planet in the solar system  with a minimum temperature of -371F.

It has a set of dark very thin coloured rings surrounding it.

By slingshotting around Jupiter it would cut travel time and allow the spaceship to arrive well within the 15 year lifetime of its instruments and power supply.

Simon says to make it work an agency would have to arrange to launch for Neptune by 2031 and Uranus by the mid-2030s at the latest.

Mark Hofstadter from the NASA Jet Propulsion Laboratory said it was ‘the right time to launch’ at the meeting held in London and reported by Nature.

It is a tight turnaround though as normally a ‘flagship mission’ of this type would take about a decade to prepare and cost billions of pounds to organise.

While NASA is the most likely space agency to operate a mission of this scale, it could also be run in collaboration with ESA or even JAXA from Japan.

Hofstadter said any green light from NASA would depend on the mission being given priority in the NASA Planetary Science Decadal Survey – reporting in 2022.

It would face stiff competition from proposals to return a sample of rock from Mars and to explore and map the surface of Venus.

Going to the ice giants is the right choice if it has to be a decision of them or Mars and Venus as they’ve not been properly studied, according to Fletcher.

‘Uranus and Neptune are genuinely out on their own, as we haven’t completed the very first phase of their exploration yet,’ he said. 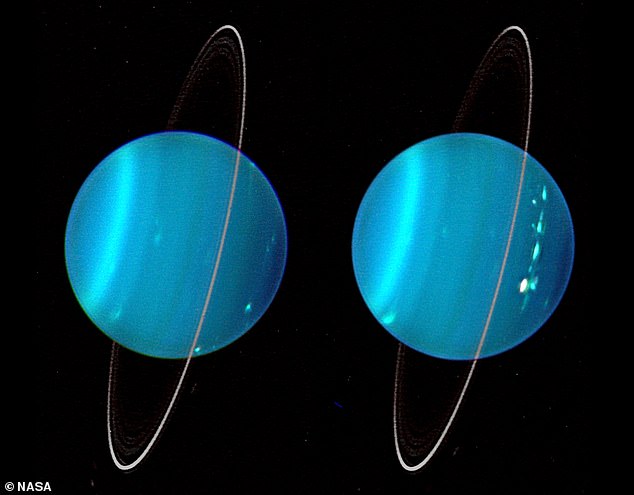 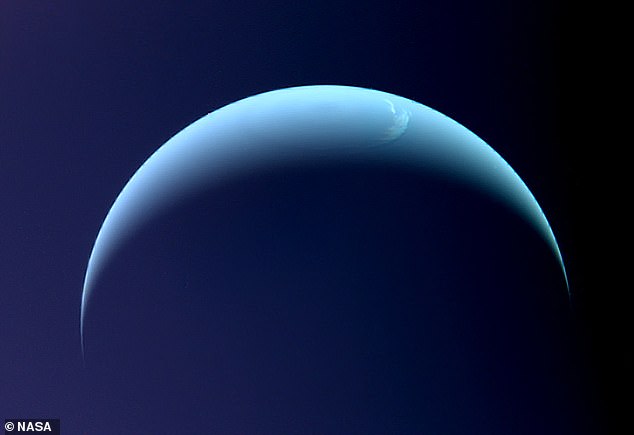 WHAT DO WE KNOW ABOUT NEPTUNE?

Neptune is the furthest planet from the Sun and was discovered by Urbain Le Verrier and Johann Galle in 1846. 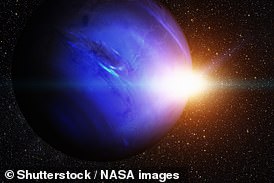 It is 2.8 billion miles from the Sun and orbits every 165 years.

The planet is 17 times the mass of the Earth and has a 16 hour day.

It is smaller and warmer than Uranus despite having a greater mass and being further away from the Sun.

It’s atmosphere is made of hydrogen, helium and methane.

Neptune has a very thin collection of rings made up of ice particles.

There are 14 moons orbiting the planet including Triton a frozen world spewing nitrogen ice into space.

The two planets at regarded as twins by astronomers due to their similar size and mass but they may actually be completely different – which is why the scientists at the Royal Academy meeting want to see a new mission to probe them.

Ravit Helled, a planetary scientist at the University of Zurich, Switzerland told Nature that the internal structures of the planets can’t be easily explained by modelling.

They can’t tell why Neptune seems to be warmer than Uranus despite being further away or what the planets are actually made of – is it water or ammonia ice?

Of the two planets Neptune is the favourite choice of the scientists as it would also be possible to probe its moon Titan which may hold a subsurface ocean.

Favata from ESA says the agency is already working on two major missions for the early 2030s so there is little chance it would be able to make a launch by then.

They could work with NASA or send a smaller cheaper mission as a fly-by of the ice giants in future – but they wouldn’t yield the same results as a full probe.

Astronomer Heidi Hammel said one issue the scientists will face in sending a mission to Uranus is – jokes.

‘I’m sorry I’m saying this. But I really do think that’s a legitimate problem we would face,’ she told the meeting.

HOW DOES URANUS’S MAGNETIC FIELD COMPARE TO EARTH’S?

A recent study analyzing data collected more than 30 years ago by the Voyager 2 spacecraft has found that the Uranus’s global magnetosphere is nothing like Earth’s, which is known to be aligned nearly with our planet’s spin axis. 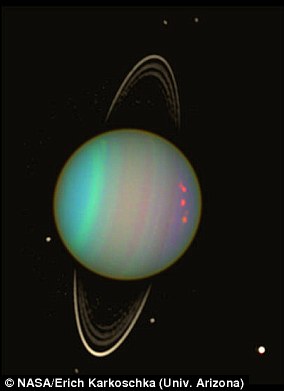 A false-color view of Uranus captured by Hubble is pictured

According to the researchers from Georgia Institute of Technology, this alignment would give rise to behaviour that is vastly different from what’s seen around Earth.

Uranus lies and rotates on its side, leaving its magnetic field tilted 60 degrees from its axis.

As a result, the magnetic field ‘tumbles’ asymmetrically relative to the solar wind.

As a result, the magnetic field ‘tumbles’ asymmetrically relative to the solar wind.

When the magnetosphere is open, it allows solar wind to flow in.

But, when it closes off, it creates a shield against these particles.