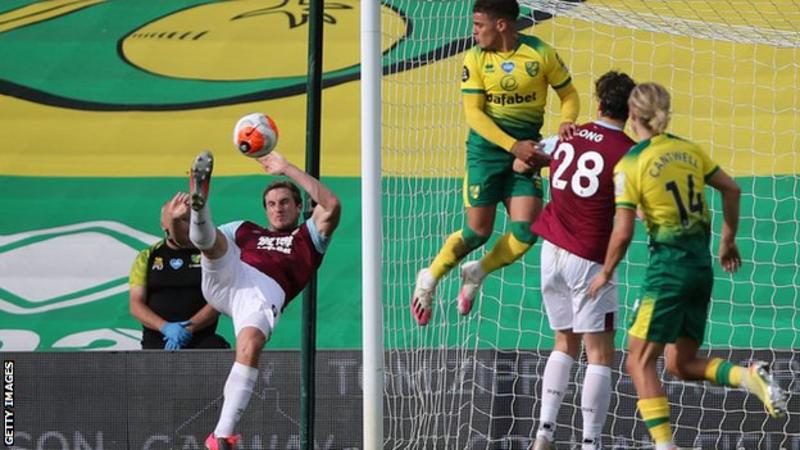 Norwich had two players sent off in an extraordinary first half as they lost to Burnley on another night to forget for the relegated side.

Emiliano Buendia was shown a straight red for violent conduct on Ashley Westwood after referee Kevin Friend watched a replay in the referee review area.

It had been an uneventful opening half an hour before Norwich’s capitulation, with just one shot on target from either side.

The hosts defended well at times in the second half to keep the score down but Burnley’s victory was confirmed when Ben Godfrey poked the ball into the back of his own net with 10 minutes remaining.

Norwich become only the third club in the Premier League to lose five in a row at home without scoring, while Burnley move above Arsenal into ninth place.

From disastrous to unforgiveable for Norwich 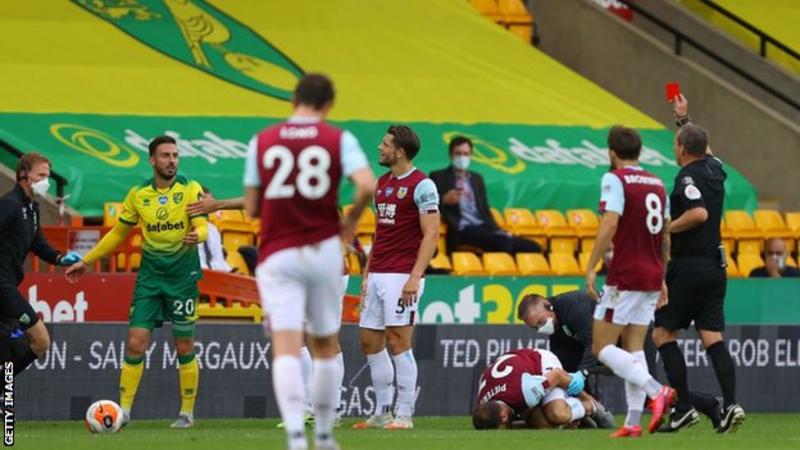 After Norwich’s relegation from the Premier League was confirmed by a 4-0 thrashing against West Ham at Carrow Road on 11 July, it seemed things could not get much worse for Daniel Farke’s side.

However, the 1-0 defeat by Chelsea that followed meant they set a new club record of eight consecutive league defeats, and 25 overall – which was also the most they had suffered in one campaign.

Canaries fans’ only hope was that they would go down with a fight in their remaining two games.

But the most conspicuous aggression shown from Farke’s side in the first half was in Buendia’s hot-headed elbow on Westwood – a reaction to a scuffle off the ball in midfield.

Friend reviewed it on the screen following encouragement from the video assistant referee and that was the catalyst for a capitulation from Norwich that took all of 14 minutes.

Already a man down, the hosts started to face some pressure – Tim Krul reacted well to save Dwight McNeil’s deflected free-kick, before Wood appeared to trip over his own feet as he tried to tap in from close range.

Then came Drmic’s reckless tackle on Pieters which drew another red card from Friend, again reviewed by VAR and the decision upheld.

And Norwich’s nightmare continued when Wood eventually gave Burnley the lead – Johann Gudmundsson slipped as he curled it in from the right and it bounced off Wood’s shin as his overhead effort rolled into the bottom corner.

Krul’s reaction – punching the post in frustration – summed up Norwich’s performance and when Godfrey slid the ball past Krul and into his own net under no pressure at the back post, the final whistle could not come soon enough for the Canaries.

For Norwich, the season could get worse still when they travel to Etihad Stadium to face Manchester City in their final game.

Another clean sheet for Pope

Burnley boss Sean Dyche said his team would be ready to face whatever came their way from a struggling Norwich side.

But in truth, the Clarets were handed victory on a plate and will probably be disappointed not to have scored more in the second half.

Rodriguez, Wood, Phil Bardsley and Matej Vydra all came close but Krul was sharp in goal for Norwich and the hosts showed at least the desire to put their bodies on the line to block every shot.

The victory was Burnley’s 15th in the Premier League this season – a club record for the competition. Not since 1975 have they won 15 or more top-flight matches.

It was also another clean sheet which means Burnley keeper Nick Pope takes his tally to 15 – the most of any keeper in the league. He had a quiet evening but reacted well to a late effort from Onel Hernandez which deflected off a defender, and kept out a diving header from Godfrey in the first half.

Pope is on course to become the first goalkeeper from a club outside the established ‘big six’ to win the Golden Glove award, and team-mate Wood told Sky Sports afterwards they would be “fighting like hell” to help him achieve it.

‘We walked into the trap’ – what they said 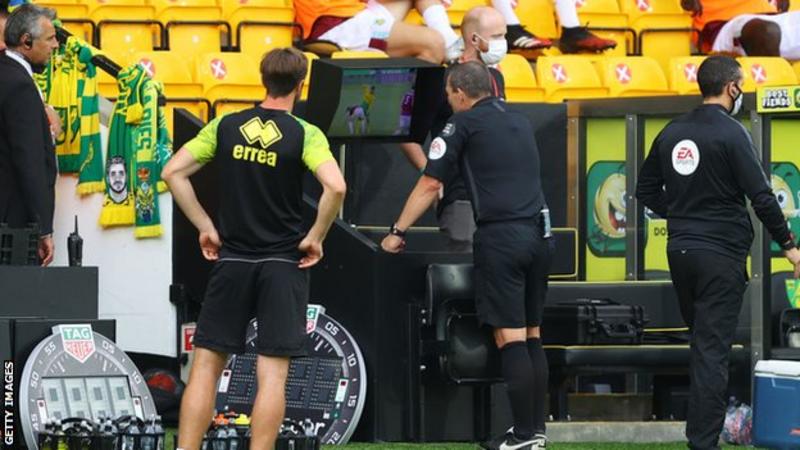 Norwich boss Daniel Farke speaking to Sky Sports: “Burnley reacted in their expected ways. They are such an experienced and established Premier League team. They realised they had problems and needed to disrupt the rhythm and provoke.

“We walked into the trap and two red cards. Naive, inexperienced, stupid – all the words are right. It’s not acceptable. It’s not possible to win points with eight players.”

Burnley boss Sean Dyche speaking to Sky Sports: “I don’t think I’ve played against a team with two sendings-off. It was a bizarre game! We’ll take the clean sheet and the win.

“We needed something because it was a strange game. The whole thing was strange. [Chris Wood] found the net from an awkward one. In the second half, we tried but our quality in the final third was quite obvious today. It’s hard to judge it. We weren’t really at it in the first half but we just need that sharpness. It’s a lot to ask of the players.”

The best of the stats 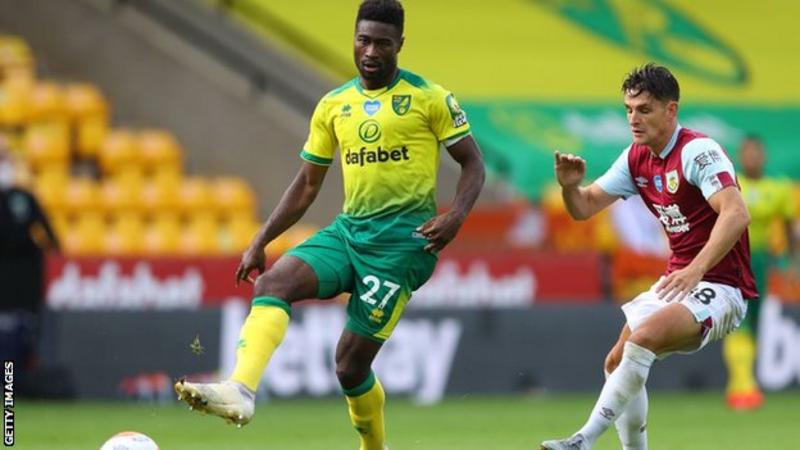 Norwich travel to Etihad Stadium to face Manchester City in their final match of the season on Sunday, 26 July (16:00 BST). Burnley host Brighton at Turf Moor at the same time.

Attempt saved. Phil Bardsley (Burnley) right footed shot from outside the box is saved in the bottom left corner. Assisted by Ashley Westwood.

Attempt blocked. Robbie Brady (Burnley) header from the centre of the box is blocked. Assisted by Dwight McNeil.

Attempt saved. Matej Vydra (Burnley) right footed shot from the right side of the box is saved in the bottom right corner. Assisted by Phil Bardsley with a through ball.

Lukas Rupp (Norwich City) wins a free kick in the defensive half.

Attempt missed. Ben Godfrey (Norwich City) header from the centre of the box misses to the right. Assisted by Kenny McLean following a corner.

Attempt saved. Onel Hernández (Norwich City) right footed shot from outside the box is saved in the centre of the goal. Assisted by Christoph Zimmermann.

Attempt saved. Jay Rodriguez (Burnley) right footed shot from the left side of the box is saved in the top right corner. Assisted by Robbie Brady.

Attempt missed. Josh Brownhill (Burnley) right footed shot from outside the box is close, but misses to the left. Assisted by Ashley Westwood.