Voters were told at the last election that Labor had one message on climate change in the south of the country and a different one in the north.

Now the Coalition is trying its own version of the same tactic, but with a twist. The Coalition also has two messages on climate change, but it is sending both messages at the same time to the same parts of the country – and even the same electorates. 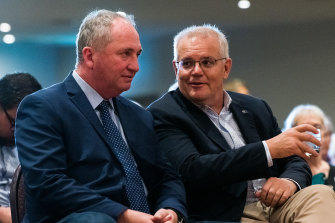 Some of the evidence is broadcast live on television when Scott Morrison and Barnaby Joyce fight different campaigns in the same city.

On Wednesday, for instance, the Prime Minister campaigned in Rockhampton after announcing $275 million in recent days for hydrogen projects in central Queensland with a promise to create “green” jobs in the transition from fossil fuels.

The Deputy Prime Minister was also in Rockhampton but did not join Morrison at his press conference. In fact, Joyce rarely joins the announcements about major hydrogen projects because some of the Nationals are openly sceptical about whether they will work.

The last statement from Joyce to central Queensland, on April 8, was all about federal funding for a new coal mine at Olive Downs, west of Townsville. He praised a $167.5 million loan to the project from the Northern Australia Infrastructure Facility.

Morrison’s message to Townsville this week was about $70 million in federal cash for a clean hydrogen hub. When the government puts money into hydrogen projects, the news usually comes from Morrison or the key Liberal in the portfolio, Energy Minister Angus Taylor.

So the two Coalition parties are walking both sides of the street.

Morrison and Joyce met in Rockhampton on Wednesday after their media appearances. The Prime Minister delivered a speech about regional Australia and the Nationals leader was in the audience. But the two are rarely seen together outside Parliament. Their last appearance at a joint press conference was in Rockhampton on March 23.

While Morrison was often photographed with the former Nationals leader, Michael McCormack, there is an obvious risk in joint appearances this close to the election. Whatever his appeal to regional Australians, Joyce had a net rating of minus 29 per cent nationwide when the Resolve Political Monitor asked voters if they had a positive or negative view of various leaders.

This is not as simple as talking about climate action in the cities and support for coal in the regions. The dual campaign in Queensland, with support for coal and clean hydrogen in the same electorate, proves the point climate activists have been arguing for some time: regional voters want a way forward, not a scare campaign about the end of fossil fuels. 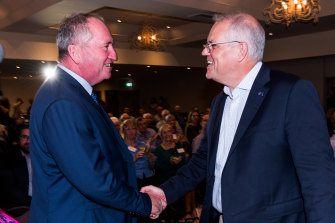 The climate debate has changed since previous elections. Morrison has signed up to net zero emissions by 2050 to keep the peace with Liberals who are in danger in city seats like Wentworth and Goldstein, making it harder for him to wage a scare campaign against Labor for making the same pledge. His campaign against Labor has to resort to overheated rhetoric about a carbon tax – something the Labor policy is demonstrably not.

The challenge for Labor is to avoid the trap laid bare at the last election when it tried to sing two songs at once about coal exports and the opening of the Adani mine in the Galilee Basin in Queensland. Voters in the southern states were lured with talk about cutting emissions; those in the north heard a happy tune about jobs and coal exports.

“Labor’s ambiguity on Adani contributed to its loss in coal mining regions,” said the Labor Party’s official election review, written by Craig Emerson and Jay Weatherill. “It sent a message to voters in parts of regional Queensland and in the Hunter Valley that Labor did not value them or the work they do.”

Labor stumbled in recent days when it suggested that coal mines would not face any greater impost under its climate policy but then had to admit that 62 coal mines would be captured by its plan to toughen the requirements in the existing safeguard mechanism, the key system to require 216 big emitters to gradually reduce their carbon output.

Labor climate spokesman Chris Bowen scrambled to recover over the weekend but the full impact of the policy is not clear for the simple reason that the tighter requirements would be a matter for negotiation with the Clean Energy Regulator. There is no specific target for each company and there is no set price for it to pay; everything is up for negotiation if Labor wins.

Whitehaven Coal chief Paul Flynn warned that the Labor policy could be a “carbon levy by stealth” but his full quote was that some in Labor seemed to want to turn the policy into such a levy. He cannot be sure exactly how this would work because it would be up to the regulator after the election.

While Labor brought its message under control, the Coalition splintered again. Nationals Senator Matt Canavan declared net zero to be “dead” while city Liberals like Dave Sharma declared him wrong. The really key comment, however, came from the Nationals MP for Capricornia, Michelle Landry, who declared the net zero pledge to be very much alive.

The old ruse of pitting the cities against the regions did not work. Landry wanted an assurance about coal as well as the promise of “green” jobs from hydrogen. Because communities are split, Morrison and Joyce offer promises for both camps.

The two Coalition leaders are not just walking both sides of the street – they are whipping out credit cards at the stores on either side.

Cut through the noise of the federal election campaign with news, views and expert analysis from Jacqueline Maley. Sign up to our Australia Votes 2022 newsletter here.