On the same day that Japanese officials recommended all schools be closed in hopes of limiting the coronavirus outbreak, the head of the International Olympic Committee said the upcoming Summer Games in Tokyo would proceed as planned.

During a conference call with Japanese reporters, IOC president Thomas Bach also urged athletes from around the world to "go ahead full-steam" with their training. 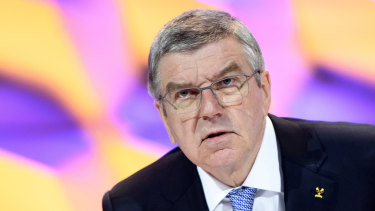 Thomas Bach, president of the International Olympic Committee, is not willing to indulge talk of cancellation.Credit:AP

Earlier in the week, veteran IOC member Dick Pound of Canada said Olympic leaders had until late May to decide on proceeding with the Tokyo Games. If action were required, he said, the most likely result would be cancellation, as opposed to postponement or relocation.

Some health officials have expressed concerns about holding a mass public gathering on the scale of the Olympics, which are scheduled to begin July 24 and run through early August. Others have said it is too soon to make any pronouncements.

Bach echoed the latter sentiment in his call to Japanese media.

"It is about now," he said, "not about speculation."

COVID-19 has already impacted the sports world, with the relocation and cancellation of major events, including track meets and car races. Bach cited examples of countries – especially in Asia – adjusting their Olympic preparations by moving competitions or training at alternate sites.

The IOC leader talked about working in conjunction with the World Health Organisation and praised Japan's efforts to minimise the outbreak.