When we talk about fighting the COVID-19 virus, we hear a lot about social distancing, self-isolation and vaccines. What’s weird is that you don’t hear much about another incredibly important tool in fighting epidemics: contact tracing.

It means detective work. When somebody tests positive, you ask for the names of anyone they’ve been in contact with recently.

“Contact tracing is really a fundamental part of managing infectious diseases that are contagious,” said Dr. Louise Ivers, a professor at Harvard Medical School, and the director of the Center for Global Health at Massachusetts General Hospital. “We try to find people who’ve been exposed to the illness, and then we give them instructions on what to do. That could be going to get a test, that could be self-isolating at home. We want to make sure that you stay at home and don’t inadvertently expose other people.”

Rhode Island Governor Gina Raimondo has asked the entire population to keep a journal of the people and places they encounter: “Every day, I want you to write down who you spent time with in person, and where you’ve been. When you find out that you’re positive, you should pull out your notebook and hand it over to the Department of Health so that they’ll have accurate, up-to-date information.”

And in Massachusetts, Governor Charlie Baker has hired 1,000 contact tracers to interview people who’ve become infected. Partners in Health, a global health organization that ran a massive contact tracing effort in West Africa during the 2015 Ebola outbreak, is running the Massachusetts program.

“Everyone talks about flattening the curve,” said Dr. Joia Mukherjee, the chief medical officer of Partners in Health. “But we want to also shrink the curve, like, shrink the total number of people that get sick.”

Mukherjee says that traditional contact tracing is more than just asking, “Who have you spent time with?” It’s also making sure you can handle being sick: “So I say, ‘Mr. Jones, do you have the ability to quarantine?’ And he might say, ‘No. I am the prime breadwinner for this family. What am I gonna do?’ Then we figure out, does he need unemployment insurance? Does he need food delivered to the house?”

That’s all very cool. But we still have a big problem: You can’t remember every single person you’ve been  near. And what about total strangers in the grocery store, or on the bus behind you?

Well, if you’ve been watching the news, you know this next part: In a historic collaboration¸ two huge tech rivals are working together.

“We came together. And literally, it was a mind meld,” said Dave Burke, the vice-president of engineering for Android at Google.

“There’s almost too many people volunteering!” laughed Bud Tribble, the vice president of software at Apple. “You can’t find anyone who doesn’t wanna help with the pandemic.

“The idea here that Google and Apple had, it wasn’t new with us, was, could we use mobile phones to help public health agencies do a better job, to amplify their efforts on contact tracing?” Tribble said.

“It’s actually a credit to the academic institutions both in the U.S. and in Europe, and in Asia. There are a lot of researchers thinking through this problem,” said Burke.

You’ve heard of Bluetooth? It’s a weak radio signal that lets your phone send music to wireless headphones, or to your car’s stereo. Very soon, iPhones and Android phones will continuously broadcast a Bluetooth beacon – basically a big number that changes every few minutes – to any phones within about 15 feet. 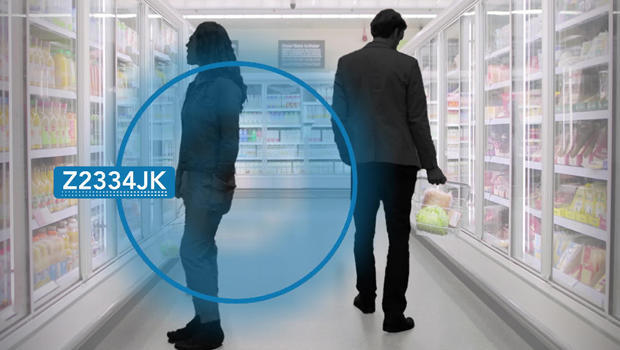 Meanwhile, your phone is picking up the beacons from all other phones nearby. It remembers these interactions for 14 days.

Now, here’s the cool part: Suppose that a few days later, someone tests positive for COVID-19.  If he’s willing, he can report his diagnosis in an app from a public-health agency. At that point, everybody he’s exposed in the last two weeks gets notified on their phones, and advised to seek testing, or to quarantine.

To be clear: nobody has to participate if they don’t want to. “It’s under user control; they can turn it on or off,” Tribble said.

“And that is one of the principles that Google and Apple aligned on, like, you know, in the first five minutes, maybe the first five seconds,” added Burke.

So, if someone opts in to the notifications, their personal identifiers – name or location – will not be shared.

And will the data collected ever be hackable, or shared with the government, or used for marketing? “No,” Burke said. “In fact, we’ve engineered the system so that the data doesn’t go to a central place. You just know that you were close to somebody who was infected, that’s it.”

South Korea and Singapore are doing digital tracing, too, but far more invasively. They do link the infections to your identity.

But MIT internet policy professor Danny Weitzner said that the American approach, which is private and optional, will pay off. “If we force people into this, they’ll likely try to hide from it,” he told Pogue. “And if everyone wraps their cell phone in aluminum foil to try to prevent these signals from spreading around, then we would have failed.”

Neither Apple nor Google are actually writing the apps; instead, the’ll help state public health agencies create the apps, which should start arriving next month.

One of the most amazing things about this collaboration is that it’s Apple and Google – smartphone smartphone arch-rivals.

“It’s very reassuring that we see the world the same way,” said Burke. “Like, we see the potential for smartphones to help people.”

This historic collaboration between giants does face a few challenges. Maybe not enough people will choose to turn it on. Maybe some people will be notified that they’ve been exposed, when they’re actually fine, or vice versa. And if you are notified, what then? Millions of people still can’t get tested, or can’t afford to self-isolate.

But Dave Burke and Bud Tribble are optimistic, and realistic.

“This is just one action; it’s not a panacea; it’s not the silver bullet,” said Tribble. “We have to do many different things in order to beat this pandemic.”

And, as Harvard’s Louise Ivers says, we have to try: “This is the biggest public health emergency of our lifetimes, and we need to be ambitious about how we’re gonna get out of this. Because we cannot all stay home forever.”