TV icon Denise Van Outen had a very unusual wakeup this morning – in the centre of a billboard in the middle of Manchester’s city centre.

The celebrity appeared well and truly tucked up after a good night’s sleep – but was in fact suspended on a 6x4m giant billboard alongside boyfriend Eddie Boxshall. 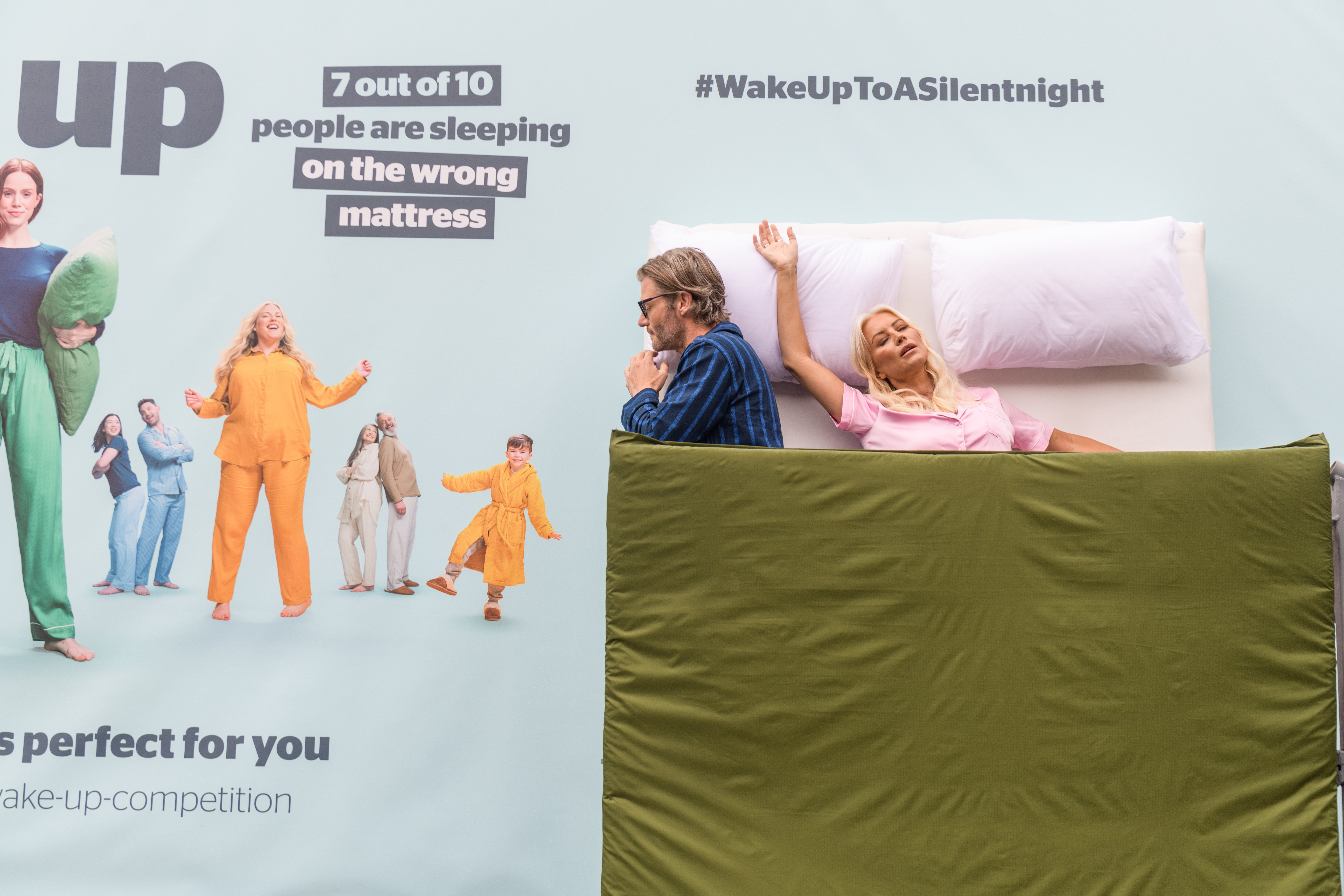 Denise Van Outen said: “I must admit, this is one of the more bizarre ways to wake up.

“But despite being suspended above the ground – and being vertical rather than horizontal – I’m surprisingly comfortable.

“I can’t say I’d want to wake up this way every day, but it’s been lots of fun and if it helps people take some steps to improve their own sleep, I’ll be happy.

The one-of-a-kind billboard was created by sleep brand Silentnight, which celebrates its 75th anniversary this year, to highlight its range of sleep solutions.

The brand also commissioned research of 2,000 adults which found the average Brit gets just three ‘good’ night’s sleep a week.

In fact, one in 10 even say they NEVER sleep well throughout a whole night.

Nearly one in five (18 per cent) can’t get to sleep because of a bad tummy, while 17 per cent struggle if they’re in an unusual location.

A quarter of Brits find themselves frustrated by a snoring partner, while 14 per cent find it harder to drop off at night if they’ve succumbed to a nap in the daytime.

While seven in 10 are sleeping on the wrong mattress.

But for 43 per cent, however, stress is the number-one thing keeping them up at night.

More than half (54 per cent) of respondents even feel as though they wake up with aches and pains in the morning after a night of poor sleep.

Three quarters also feel as though the night is ‘never going to end’ when they’re staring at the ceiling struggling to nod off.

Brits also find the post-lunch slump the point in the day they feel most tired, pinpointing 14:32 in the afternoon as the minute they find it hardest to keep their eyes open.

A little under half (47 per cent) feel being overly tired affects their mood, while 27 per cent ‘fuel’ themselves with coffee to give them much-needed energy.

Just under one in three (31 per cent) have even been so concerned by their own tiredness they visited a medical expert, according to the OnePoll research.

Katherine Collins, senior brand manager at Silentnight, said: “There are all kinds of reasons why people might struggle to sleep on a given night – or even regularly – and it’s time to put compromise to bed.

“A lot of the reasons are things that can’t be changed by external forces, but there are things everyone can do to improve their sleep.

“Things like cutting down on caffeine, eating and drinking the right things and making sure your mattress supports your sleep style can have a huge impact.

“And while we don’t imagine most people would sleep too well suspended from a billboard, we’d back our mattresses to at least feel comfortable while you’re up there.”