When Fast and the Furious star Paul Walker died in a high-speed crash on Saturday, November 30 2014, experts believed he'd died instantly at first.

But horrifyingly, the Fast and the Furious star's post-mortem uncovered the real harrowing circumstances of his death – caused when a car he was a passenger in hit a lamppost and bust into flames.

The tragedy unfolded when Paul and his good friend Roger Rodas decided to take the latter's cherry red Porsche Carrera GT for a fateful spin after hosting a charity fundraiser for Typhoon Yolanda in Los Angeles suburb Santa Clarita.

They were seen driving at an 'unsafe' speed of between 70 and 100mph before the car suddenly careered out of control for a mysterious, unknown reason.

Spinning in the road, the vehicle hit a kerb before smashing into a tree, getting torn almost in half by a lamppost and bursting into flames.

Horrified onlookers rushed to tackle the molten fireball with extinguishers, but it was too late.

Having clearly suffered, Paul was found lay supine in a 'pugilistic stance' whereby the muscles of the body contract due to heat and pull the limbs into a 'boxer-like' appearance.

According to the Medical Dictionary, a pugilistic stance is "caused by high-temperatures in fire, resulting in muscle stiffening and shortening and can occur even if the person was dead before the fire."

The horrific burns injuries left his skin so badly charred that he could only be identified through dental records, and his incinerated organs were unfit for tissue donation.

The father-of-one suffered multiple fractures throughout his body, including his jaw, collarbone, left upper arm, ribs and pelvis, according to the report. 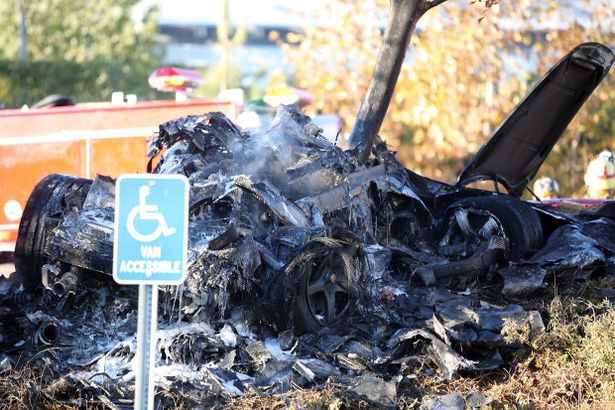 Even more terrifying, bits of soot were found in the star's windpipe, meaning he'd been alive and still breathing as the fire raged.

As for Roger, the top portion of his skull was found to have fractured and his brain was gruesomely exposed.

No evidence of drink or drugs was found and the coroner recorded the cause of death as "combined effects of traumatic and thermal injuries."

Paul's devastated daughter Meadow later filed a wrongful death lawsuit against Porsche, claiming her dad had been alive for one minute and 20 seconds after impact but was unable to escape because of his seatbelt.

The lawsuit, obtained by TMZ, claimed the fire didn't break out for more than a minute after the smash, giving Paul time to escape, but that the seatbelt had “snapped Walker's torso back with thousands of pounds of force, thereby breaking his ribs and pelvis”.

It also claimed the car lacked proper door reinforcements and didn't use fuel lines that break free to prevent a fire in a crash.

“Absent these defects in the Porsche Carrera GT, Paul Walker would be alive today,” it stated.

And Meadow's lawyer Jeff Milam told ABC news at the time: "The bottom line is that the Porsche Carrera GT is a dangerous car. It doesn't belong on the street. And we shouldn't be without Paul Walker or his friend, Roger Rodas.

However, Porsche defended itself stating Paul knew "knowingly and voluntarily assumed all risk, perils and danger in respect to the use of the subject 2005 Carrera GT."

The battle was finally resolved in 2017 with the wrongful death lawsuit withdrawn and the terms of the settlement kept confidential.