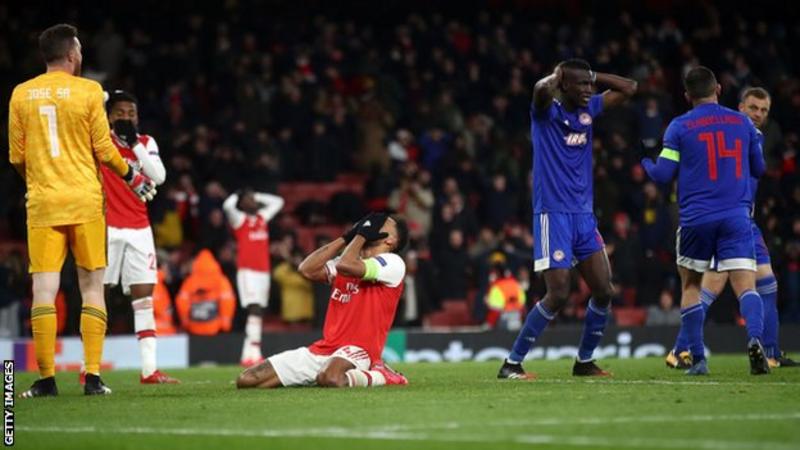 From ecstasy to despair, Arsenal striker Pierre-Emerick Aubameyang experienced it all within the space of just seven minutes on Thursday.

The striker had scored a sensational goal in the 113th minute of the Gunners’ Europa League second-leg match with Olympiakos to put them 2-1 up on aggregate and seemingly on their way into the last 16.

The Greek side then hit back when Youssef El Arabi stabbed in following a corner to give the visitors a 2-1 lead on the night that made it 2-2 on aggregate and put them on course to advance via away goals.

But there was one final, dramatic moment to come when, with seconds left, the ball ricocheted into Aubameyang’s path six yards from goal and, with just the goalkeeper to beat, the striker missed.

But this time the usually deadly forward skewed his effort wide and, after a miss which left players from both teams with their heads in their hands in disbelief, Aubameyang himself was at a loss to explain what happened.

“I don’t even know,” he said when asked how he missed it.

“It can happen but I do not know how I missed this chance. I was tired, I had some cramps but it is not an excuse.”

‘It hurts. It is cruel. A massive disappointment’

It is hard to blame Aubameyang for the defeat, however.

His goal late in extra time should have been enough to send Arsenal into the next round but the Gunners’ inability to deal with a set-piece – for the fourth time in just two games – was ultimately the knockout blow.

“We were in control but conceded a set-piece to put us in a difficult position. If you concede four goals from set-pieces in two games it makes it very difficult.

“Attack against defence in 25 metres is difficult but we created enough chances to win the game comfortably.”

The defeat was Arsenal’s first of 2020 and only their second under Arteta but the manner of the loss and the competition it came in will have been particularly painful for Gunners fans.

Arsenal had been disappointing for much of the game and did not have a shot on target until the 77th minute, but Arteta refused to criticise his players.

He added: “It is cruel. It is a massive disappointment but at the same time I am very proud of the players.

“It would have been an incredible lift if we had managed to go through the tie. The players have my backing for the way they played but it is painful.”

‘Every single player could have done more’

Former Arsenal captain Martin Keown felt it had been a disappointing performance from start to finish by his former side, with defeat closing off one avenue to Champions League qualification.

Speaking on BT Sport, Keown said: “It was the first time I felt that the players were not responding to the manager and the manager did not know what changes to make.

“If you break down the performance you could have looked at every single player and say that they could have all done more. Nicolas Pepe is going to have to improve. Gabriel Martinelli should have come on a lot earlier. Granit Xhaka was taking the easy way out. A lot of players were not playing their best.”