Priti Patel is set to survive the extraordinary Home Office bullying row – for now. But she is wounded. Boris Johnson’s decision to make a public show of support for the Home Secretary means that the howls of protest from Labour about the need for an inquiry will come to nothing.

Sir Philip Rutnam is also likely to be disappointed if he thought the political hand grenade he lobbed at his former boss would produce an immediate casualty.

The Prime Minister was crystal clear last night that he believes Miss Patel to be a ‘fantastic Home Secretary’, despite Sir Philip’s description of her as a liar and a bully only a day earlier. 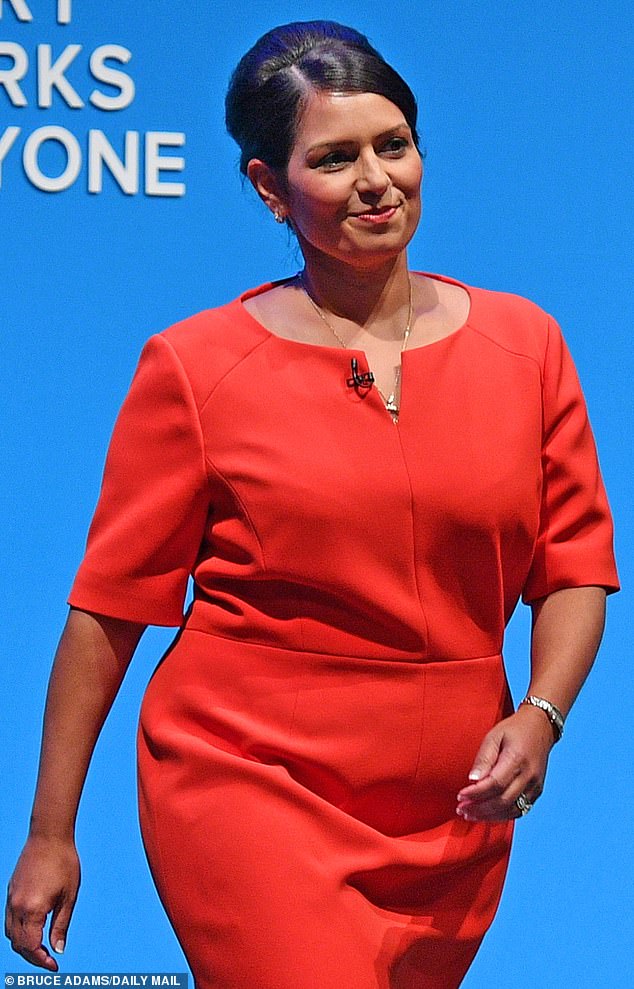 Boris Johnson believes Priti Patel to be a ‘fantastic Home Secretary’ despite recent revelations that she was the subject of a formal complaint whilst in her previous role, which she served in between May 2015 and July 2016

But the PM’s intervention is far from the final word in a saga that has been rumbling away for months and which looks unlikely to end with Sir Philip’s departure.

One senior Tory MP was gleefully telling colleagues last week that he had ‘opened a book on whether Priti Patel or Dominic Cummings is first out of the door’ – and predicted both would go this year.

Miss Patel now faces an uphill battle to win back the trust of officials as she tries to push ahead with a major new immigration system, a crackdown on serious crime, and the recruitment of 20,000 new police officers – all key pledges in the PM’s election manifesto – as well as overseeing efforts to counter terrorism.

If she can deliver on that then she will survive, whatever her grumbling officials might want. 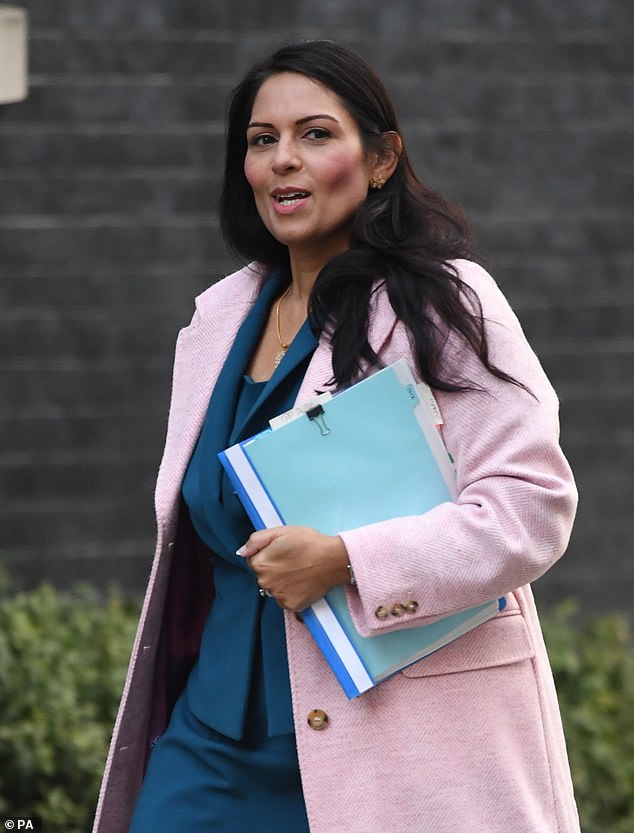 Following claims of bullying, Miss Patel (pictured) now faces an uphill battle to win back the trust of officials as she tries to push ahead with a major new immigration system, a crackdown on serious crime, and the recruitment of 20,000 new police officers

But the sprawling Home Office has long been known as a political graveyard, and even supporters are worried that Miss Patel may be tripped up by officials loyal to Sir Philip in the coming months.

‘Priti’s problem now is that she doesn’t know who she can trust,’ said one. ‘The Home Office is full of man traps and the worry is that officials will just let her stumble in to one and then make sure everyone knows about it.’

Friends are also surprised by Downing Street’s attitude. There are tensions between Miss Patel and members of the PM’s team, including rumours of rows behind the scenes.

Despite Mr Johnson’s public show of support yesterday, No 10 has quietly removed two of the Home Secretary’s closest aides in recent months. In their place she has been sent a new policy adviser, Michael Young, who is a close ally of Mr Cummings, the PM’s chief adviser. Mr Cummings is said to have told him: ‘You have one job – make sure that Priti doesn’t f*** up the borders.’

It is hardly the greatest display of confidence, although No 10 sources were last night quick to praise Miss Patel’s performance last month in launching the new points-based immigration system.

On top of that, Miss Patel still faces potential complaints of bullying from Home Office staff. Sir Philip accused her of ‘shouting and swearing, belittling people, making unreasonable and repeated demands’. Several of her alleged victims are still at the Home Office. 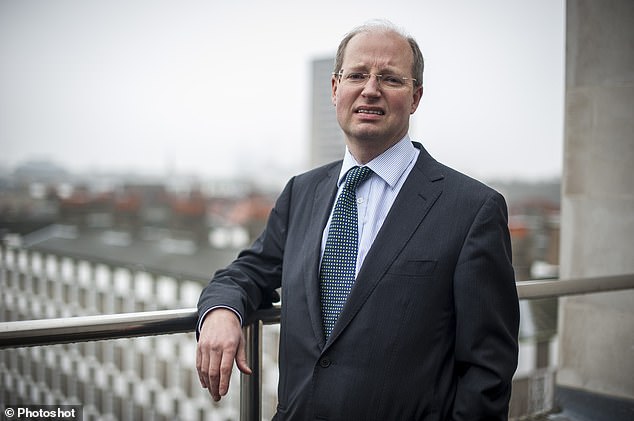 In Sir Philip Rutnam’s civil war against the Home Secretary, he accused her of ‘shouting and swearing, belittling people, making unreasonable and repeated demands’. Many have suggested his allegations have sexist undertones. He quit as Permanent Secretary at the Home Office because of a ‘vicious’ campaign against him orchestrated by Miss Patel

Yesterday there were fresh claims of a complaint about her conduct while she was a minister at the Department for Work and Pensions. Supporters insist that Sir Philip’s extraordinary allegations were a long way over the top – and some suggest they have sexist overtones. There have been plenty of abrasive male ministers over the years, but no permanent secretary has ever felt the need to respond like Sir Philip. Few deny that Miss Patel’s ‘determined’ style can be too bracing for some officials. But they say she has been given the task of pushing through major policies in a department that has not covered itself in glory in recent years.

One former official pointed out that Sir Philip also had a difficult relationship with Amber Rudd, who lost her job over the Windrush scandal while he kept his.

‘To fall out with Amber and Priti should tell you all you need to know about him,’ the source said. ‘He never seems to stop scheming. If Priti had gone, he’d have been unhappy with whoever was appointed.’ 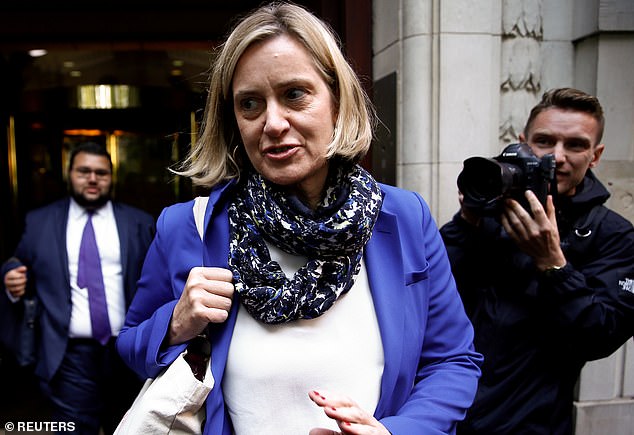 One official claimed Sir Philip had a difficult relationship with Amber Rudd (pictured on September 24, 2019), who lost her job over the Windrush scandal while he kept his. They said his falling out with Rudd and Patel ‘should tell you all you need to know about him’

But the tensions at the Home Office are not unique. The new government is rubbing up against officialdom in a string of departments, including the Foreign Office and the Ministry of Defence, where the permanent secretaries are also said to be targeted by Mr Cummings and his allies.

Few in Whitehall expect him to follow through with his threat to sue the Government – a process that could prove embarrassing for all sides.

But his parting blast has made it harder for those seeking to curb the power of the Whitehall mandarins.

By Jason Groves and David Barrett

Boris Johnson threw a protective arm around Priti Patel last night as she faced a backlash over bullying allegations.

The Prime Minister gave the Home Secretary his full support in her role in ‘one of the toughest jobs in government’ – despite her being dragged into an extraordinary public row with her top official.

‘I obviously do have confidence in Priti Patel,’ he said. ‘She is a fantastic Home Secretary.’

In a bombshell resignation statement on Saturday, Sir Philip Rutnam said he was quitting as Permanent Secretary at the Home Office because of a ‘vicious’ campaign against him orchestrated by Miss Patel. 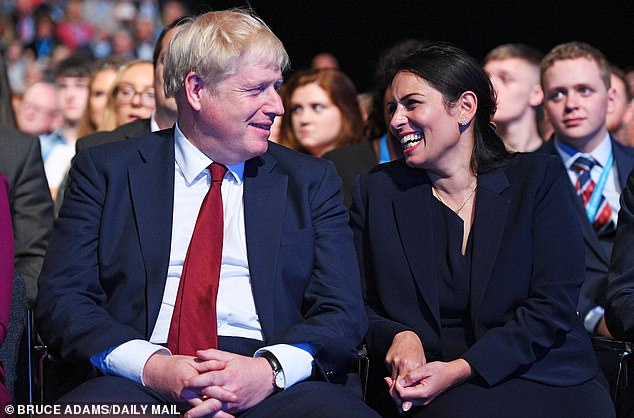 Boris Johnson has given Miss Patel (pictured on September 30) his full support in her role in ‘one of the toughest jobs in government’ and insists he ‘obviously’ has ‘confidence’ in her amid bullying claims. He is also said to be suing the government for constructive dismissal

Sir Philip, 54, called in news cameras as he delivered an unprecedented statement, accusing his former boss of being a liar and a bully.

He also said he was suing the Government for constructive dismissal.

Labour called for an inquiry into the row, and said Miss Patel should be suspended. But No10 made it clear that she had the PM’s full support.

One source said: ‘He has total confidence in her. She is doing a great job, driving through real change on the Government’s priorities.’

Senior Tories also rallied round. Heath Secretary Matt Hancock told The Andrew Marr Show on BBC1 yesterday: ‘Priti is a very determined Home Secretary. She is probably closer to where the public are on issues of law and order than any home secretary in recent history. I also think she is extremely courteous.’

Former transport minister Nusrat Ghani suggested there was a hint of sexism about complaints against Miss Patel, telling Sky News: ‘It’s curious that if you’re providing leadership, if you’re determined, working at a fantastic pace, within men that is seen as a fantastic skill and for women sometimes it’s seen as challenging.’

One insider noted that while Sir Philip had a good relationship with Sajid Javid, he fell out with both his female bosses at the Home Office – Miss Patel and Amber Rudd.

Shadow chancellor John McDonnell called for her to be suspended during any inquiry, adding: ‘It’s bizarre… when you get a civil servant going public like this, it’s unprecedented. I can’t remember a case like this.

‘So there must be something pretty bad that’s gone on. It looks as though she’s on the way out.’ Sir Philip’s resignation followed weeks of toxic briefings and counter-briefings at the Home Office.

Relations finally collapsed last week after it was suggested that the security services did not trust Miss Patel enough to give her full intelligence briefings – a claim that MI5 took the rare step of denying.

Sir Mark was then called in to broker a ‘dignified departure’ for Sir Philip. One Whitehall source said that during crisis talks last week Sir Mark conceded that the senior civil servant ‘had a case’.

However, Sir Philip is said to have rejected a ‘generous’ pay-off after he was asked to sign a non-disclosure agreement.

Miss Patel declined to comment yesterday, but is known to be angry about bullying allegations which she insists are untrue.

One ally said hostile briefings to the Press started after she asked tough questions about the Home Office’s handling of the Windrush scandal, which unfolded while Sir Philip was in charge. ‘She finds it more than a coincidence that these ridiculous bullying allegations started straight after she began asking difficult questions about Windrush,’ the ally added.

Miss Patel is said to have felt Sir Philip tried to undermine her. He is once believed to have asked the then security minister Brandon Lewis to present the Home Office’s views on Brexit at Cabinet after Miss Patel rejected his advice.

Officials who worked with Miss Rudd, who lost her job over the Windrush scandal, were also scathing about him.

One said: ‘The idea that Rutnam is an innocent victim is quite extraordinary.

‘On his watch, the Home Office systematically leaked and briefed against a home secretary, making her position untenable while he hid from the action. His leadership was non-existent.’

But a Whitehall source sympathetic to Sir Philip said he would not have gone public with his legal claim unless he was certain of his ground, adding: ‘Philip knows what he is doing. There is no way he would have brought a legal case and made the claims he has unless he is confident he has material against her to prove his case.’

Another official said: ‘If Philip Rutnam was saying something she didn’t like, there was usually a bloody good reason to say it.

‘If the Home Secretary is told something can’t be done… civil servants aren’t trying to protect themselves – it is because what she wants would lead to chaos.’