Happily eve-fur after! Dog whose eyes had to be removed after being neglected by his owners finds a new loving home where he loves playing fetch and chewing toys

An adorable dog has found a new best friend and forever home after abuse and neglect left him blinded.

Terrier mix, Puddin, one, was born with sight, but a rough start to life left authorities with no choice but to remove her infected eyes and sew her eye-sockets shut before she found happiness with a new owner in Texas.

Cute pictures show the adorable pooch loving life, playing fetch without a care in the world, toying with a cloth stuck on her head, and snuggling up with new owner and student, Cory Gonzales, 23, from Lubbock.

Despite her lack of sight, Puddin can clearly still show emotion as these heart-warming pictures show. The happy pup can be seen rocking a pair of sunglasses and happily playing with her toy bone. 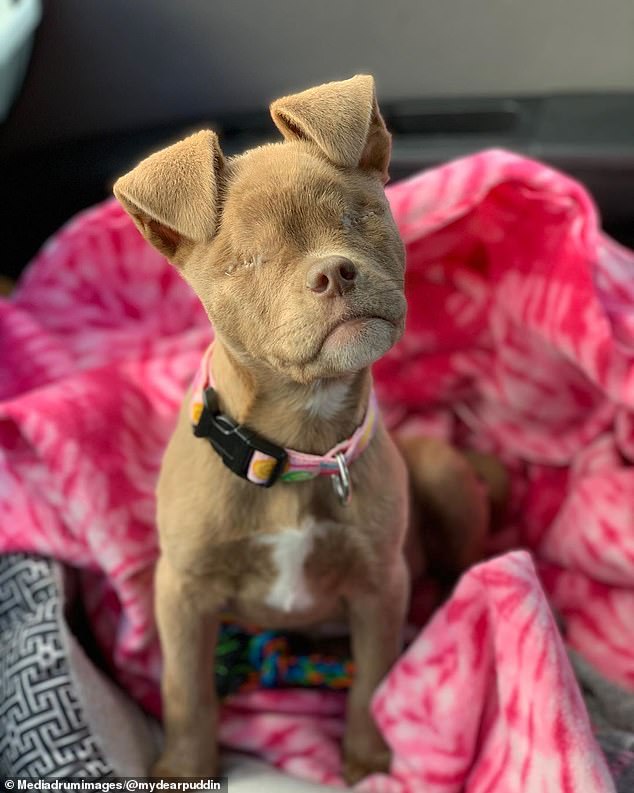 Terrier mix, Puddin, one, was born with sight but a rough start to life left authorities with no choice but to remove her infected eyes and sew her eye-sockets shut, but she eventually found happiness with a new family 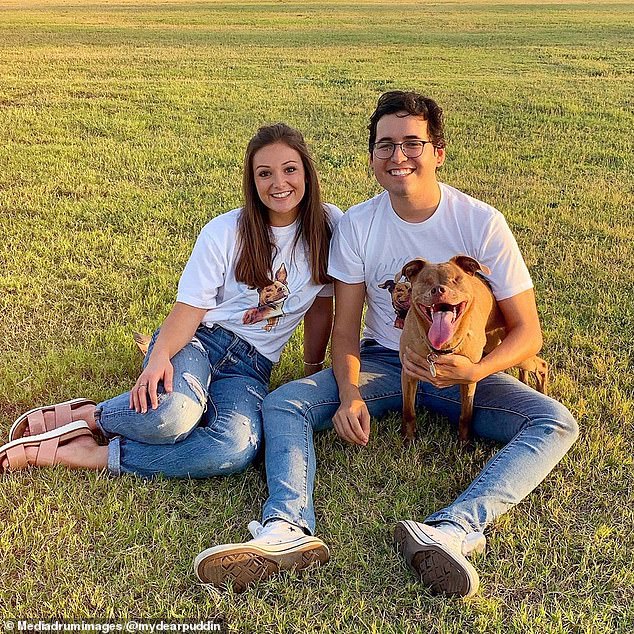 Cory Gonzales, 23, from Lubbock, pictured with a friend, gave Puddin a home after her former owners let her go following a legal battle

While it is unknown what caused the pup’s diseased eyes, the Society for the Prevention of Cruelty to Animals of Texas (SCPA) had to take the case to court to rescue the six-week-old mistreated mutt.

‘She either was scratched during play or maybe got into something worse. Her owners sought medical help so late that it progressed and got pretty severe,’ said Cory.

‘They let it get so bad before going to the vets that animal control was called to see if they could help. When asked to hand Puddin over the neglectful owners refused, so a long drawn out legal battle began.

‘But aside that, we don’t know anything about her family history. I hope maybe one day we will. All I know is that Puddin was the name the SPCA of Texas gave her when they rescued her. 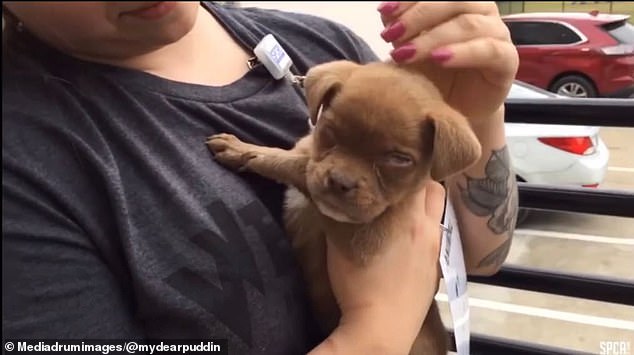 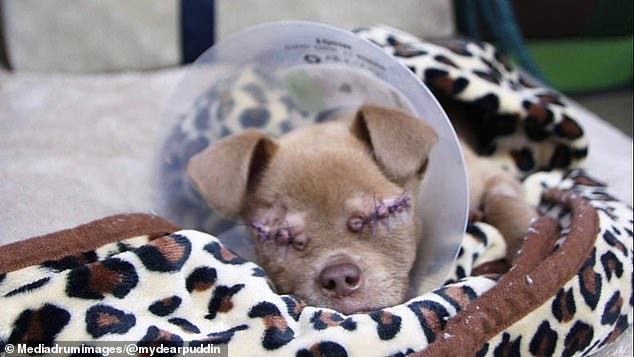 ‘At the end of it Puddin was saved, but her eyes were destroyed. They were causing her too much pain. She was blind and needed to have her eyes removed.’

After seeing the cuddly young dog on an internet ad, the Cory was captivated by the then four-month-old canine and gave her a forever home.

Dog-lover Cory is now on a mission to encourage owners to adopt and not shop for pooches, to raise awareness that even visually impaired pets are perfect.

‘I was looking to adopt a dog because I really wanted to have a companion when going back to grad school. I couldn’t bring my family dogs from home, so I fell in love with Puddin,’ he said. 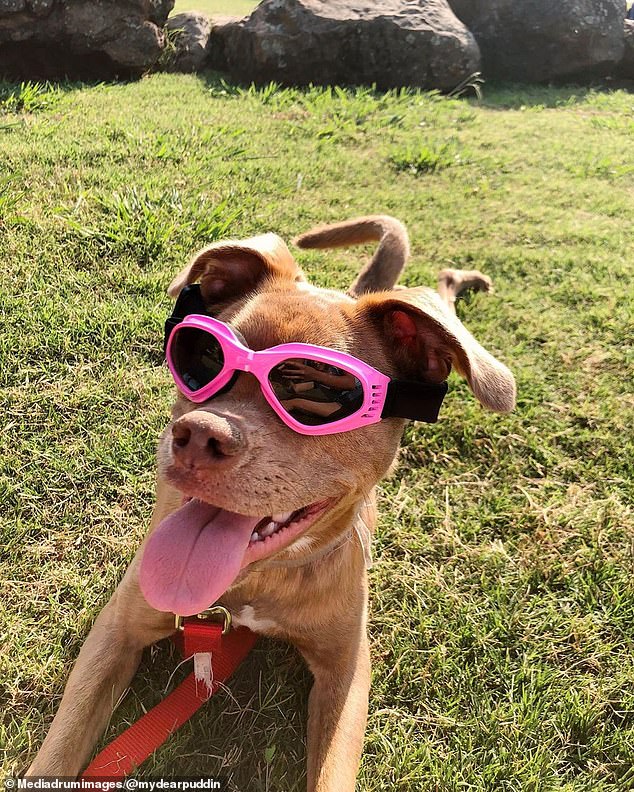 Puddin is now living her best life with Cory. Pictured rocking a pair of sunglasses on a sunny day’s walk 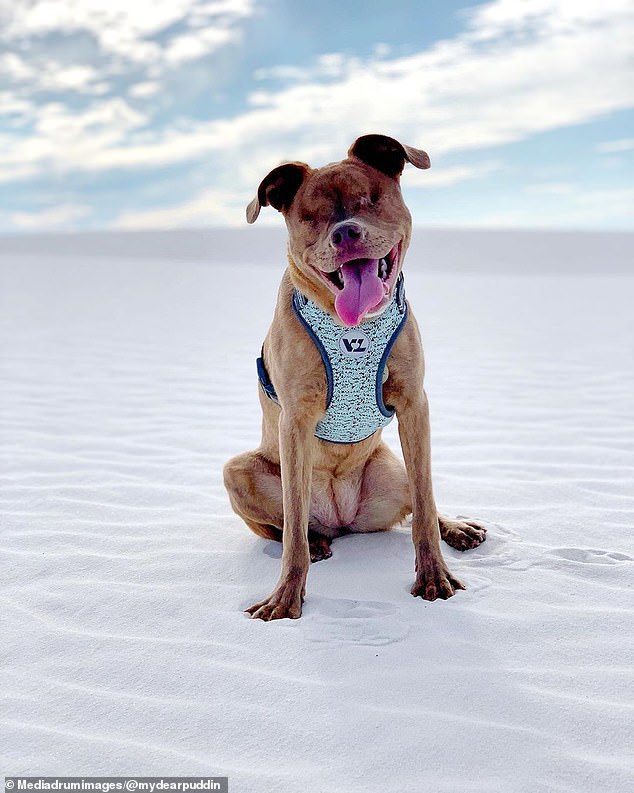 Cory takes Puddin everywhere, and even though the pup (pictured) cannot see, she is still having plenty of fun

‘I think just because a dog needs special attention or has special needs doesn’t mean it’s going to be any more different or difficult than raising a typically developing dog.

‘We haven’t had any added challenges with Puddin other than working on additional commands such as watch out or up and down for stairs.’

Puddin leads a high-quality life taking long naps and trips to the dog park with pooch-pal Murphy, just like any other dog. 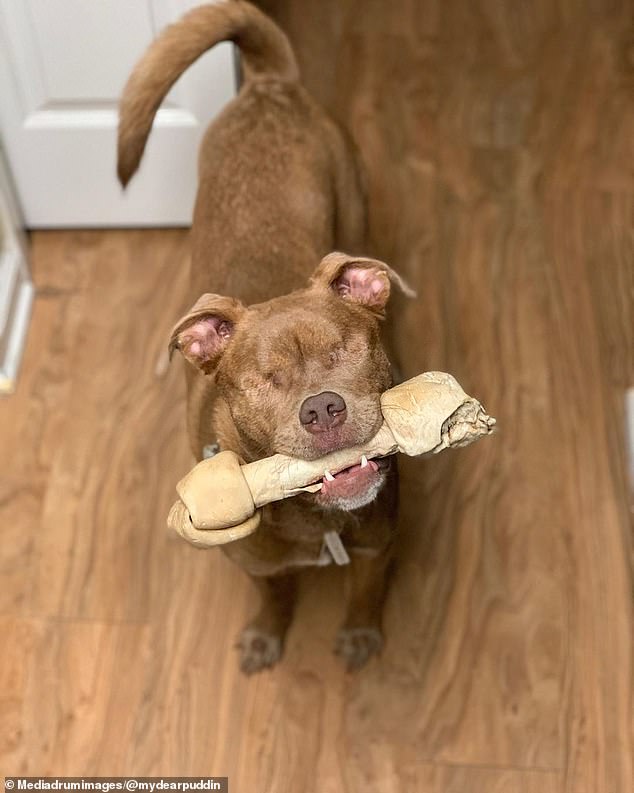 Cory said training Puddin has not been more challenging than any other dog, but added he had to teach her special command, such as ‘watch out’ 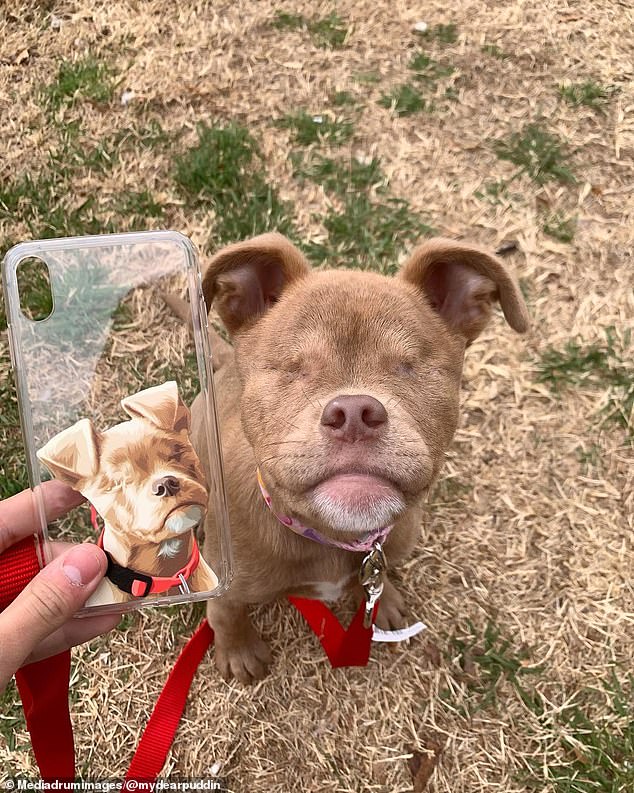 Dotting pup dad Cory got Puddin created an Instagram account for his rescue, where she gathered 135,000. She now even has her own line of Puddin products (pictured)

Proud doggy-dad Cory has begun to sell merchandise after requests from fans and Puddin is loved by 135,000 followers on Instagram.

‘My mother actually suggested I create an Instagram, she thought Puddin was the cutest and thought the world needed to see,’ Cory said

‘The response has been mostly positive, but we have had a couple of people say some not nice things but to be honest I don’t even give it the time of day. There is nothing but positive vibes allowed in Puddin’s house. 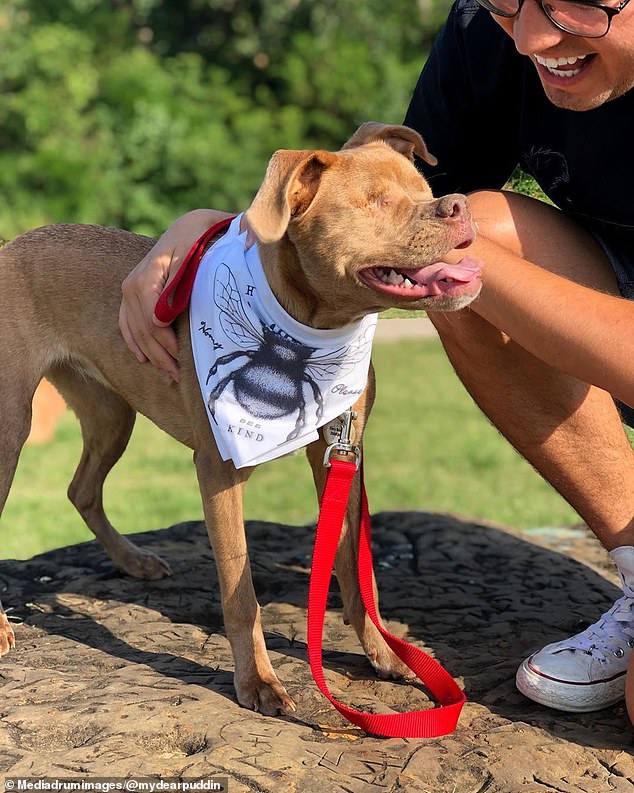 Puddin’s owner encouraged people to rescue dogs instead of adopting puppies, because they needed homes too 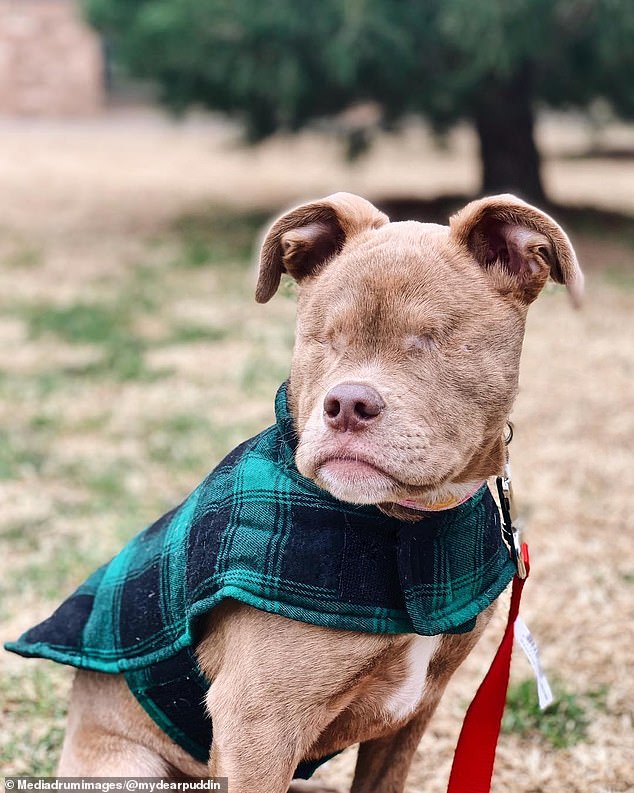 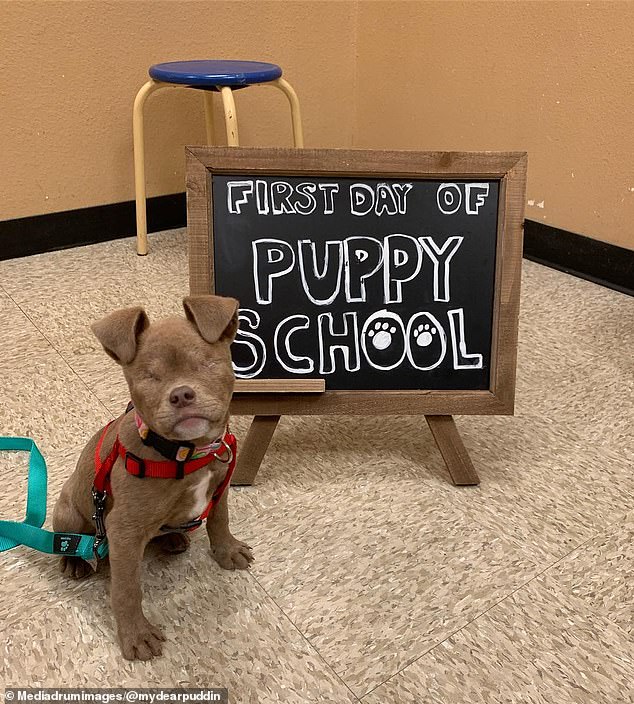 ‘Please rescue a dog. It is simple. Those babies need homes, and they will just give you all the cuddles and kisses.

‘I think it’s incredible so many people all over the world feel so much love for this incredible dog like I do.’