Families of former soldiers who have taken their own lives are holding out for a royal commission into veteran suicides after Labor pulled its support for the government's alternative of an ongoing national commissioner.

But Attorney-General Christian Porter says it's not an either/or option and if the legislation is defeated, no examination of the "scourge" will happen. 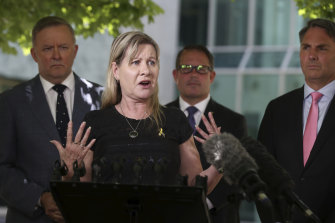 Independent senator Jacqui Lambie, who has campaigned strongly against the government's plan in favour of a royal commission, says hundreds of lives have been lost, including 11 over the past three weeks. She and Labor's Luke Gosling have warned that suicides are likely to increase in coming months as veterans deal with the public release of the Brereton report into alleged war crimes by Australian special forces troops in Afghanistan.

"If you're going to get to the bottom of it then you need to open it right up and let everybody come through and speak," Senator Lambie said. "We're never going to stop veteran suicide but what we can do is reduce them and the only way we can do that is with full transparency through a royal commission."

The suicide rate for ex-servicemen is 18 per cent higher than for the broader population and ex-servicewomen are twice as likely to take their own lives as other Australian women.

The government argues its National Commissioner for Defence and Veteran Suicide Prevention will have powers akin to those of a royal commission but will operate in perpetuity rather than being time-limited.

"There is not an either/or option," Mr Porter said. "Surely Labor, for once, can put its political game-playing aside and support our defence and veterans communities."

But Julie-Ann Finney, whose son David took his own life in early 2019, believes it won't do anything for veterans or their families.

"I'm not saying stop everything and do nothing. But do not placate us," she said.

"This government offered me and other mothers a Mother's Medal. Do you think that I don't know what that would look like? Maybe a little rope or a bottle of pills that I can wear saying that my child committed suicide? "I'm not going to be placated. My son is dead." 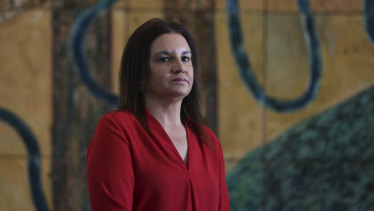 Opposition veterans affairs spokesman Shayne Neumann says only a truly independent, systemic and public examination of the issue will do. He lashed the government's plan as "a half-baked, inadequate scheme that lacks independence, resources and scope".

Labor backed the commissioner when it was announced in February but has since changed its position after hearing from families of veterans.

The government needs three crossbench votes to pass the bill. The Greens and Centre Alliance senator Stirling Griff are also opposed and a spokesperson for independent Rex Patrick said he was "highly unlikely" to back it.

The government appointed an interim commissioner, former ACT magistrate Bernadette Boss, in September with the intention that she would become permanent once the legislation passed. However, the process has come under fire after it emerged in Senate hearings the position was not advertised and Dr Boss was a long-time friend of Defence Minister Linda Reynolds. Dr Boss has served in the Army in both a full-time and reservist capacity over more than two decades.

The Coalition members on the Senate committee examining the legislation to establish the commission cautioned the government must consider the perception of bias carefully in its ultimate appointment of a national commissioner.

But Mr Porter said he had no intention of changing the plan to formalise Dr Boss' position.

"Very sadly, if the bill does not secure support, obviously the interim commissioner's work would cease. That would be a terrible outcome that Labor would be responsible for," he said.

Our Morning Edition newsletter is a curated guide to the most important and interesting stories, analysis and insights. Sign up to The Sydney Morning Herald’s newsletter here, The Age’s here, Brisbane Times’ here, and WAtoday’s here.