After more than three successful decades in Hollywood, the last thing someone could call Salma Hayek is “lazy.”

And yet, the Oscar-nominated actor insists that being lazy is what kept her from getting a part in the 1999 film “The Matrix.” But even though she didn’t get the part, Hayek revealed that the audition process led to the beginning of her friendship with Jada Pinkett Smith.

“We were one of the four finalists for ‘The Matrix,’” Hayek revealed on the latest episode of Facebook Watch’s “Red Table Talk” on Wednesday. “And so we had jumped through many hurdles, screen testing, and many auditions. They brought these stunt coordinators from Asia. It was the physical test.”

“Now I’m flexible and agile, but I’m lazy,” Hayek said, as hosts Pinkett Smith, Willow Smith and Adrienne Banfield-Norris all laughed. “I never really went to the gym. They said, ‘You have to run!’ I go, ‘To where?’ ‘Around. You have to run around.’ I couldn’t even go around the room once.”

“I was like [panting and panting] and in comes Jada. A mean, lean, sexy machine. Oh my God! She was so good! It was so embarrassing,’” Hayek said as the group continued to chuckle.

Hayek said that although Pinkett Smith was “really impressive,” they both lost out on the part.

“They never called me again after that day,” Hayek said. But both agreed that actor Carrie-Anne Moss, who got the role as Trinity in “The Matrix,” was “perfect” for the part.

Despite missing out on “The Matrix,” Hayek is back in an action movie, and breaking barriers. For her latest role in “The Hitman’s Wife’s Bodyguard” alongside Ryan Reynolds and Samuel L. Jackson, Hayek portrays a woman in her 50s going through menopause ― something she insisted on. 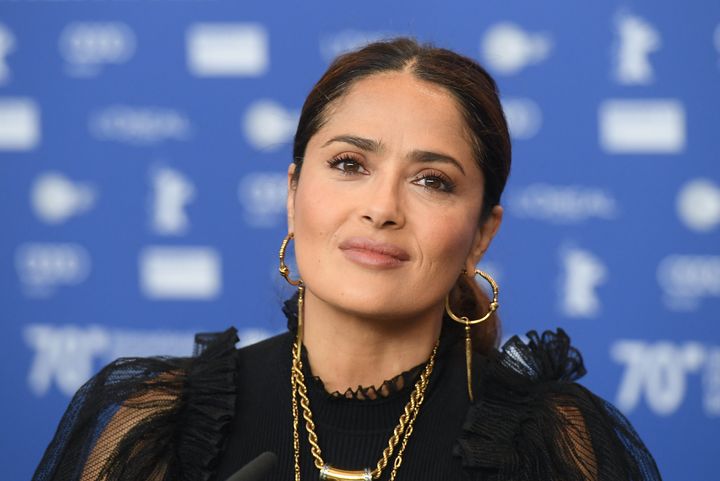 “It was conceived as maybe a girl in her 40s, but the truth is that I said, ‘Why?’” Hayek revealed. “And I said, ‘Let’s make it a woman in her 50s, and I think we should make it about her having to do all this action while she’s going through menopause.’”

To watch the rest of Hayek’s “Red Table Talk” interview, see below: