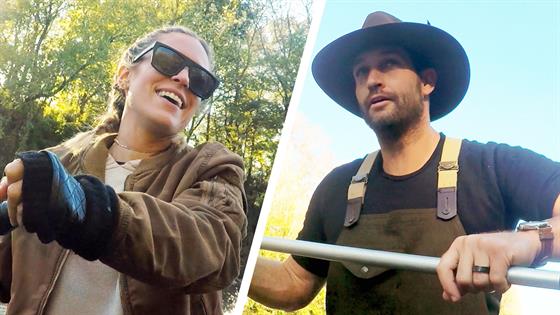 On tonight’s all-new Very Cavallari, Jay Cutler convinced wife Kristin Cavallari to join him on a camping adventure. Why? Well, since the duo “had been living in [Kristin’s] world as of late,” he thought it’d be nice to do an activity he loves.

“I do feel like this would be a nice way for me to show him that, I’m willing to things that he wants to do as well,” Kristin noted to the Very Cavallari camera.

Of course, the Very Cavallari couple extended an invitation to friends Justin Anderson, Austin “Scoot” Rhodes, Stephanie “Biegs” Biegel and Mark “Chuy” Block. Despite the lot being more “glampers” than campers, they all agreed to the outdoor overnight.

On the drive to the campground, Jay attempted to assign jobs to others in the group. It’s safe to say it didn’t go according to plan.

“Do you and Justin want to set up the tents and me and Scooty get the fire going and everything? Or do you guys want to do the opposite?” the retired NFL star asked.

“What? Are you serious?” the Uncommon James mogul responded. “Yeah, no. Justin and I are gonna like…we’ll make people drinks.”

Upon arriving at the campsite, Jay and Scoot set up their tents and began building a fire. As for Kristin and Justin? They were delayed in their drink making duties as there was no picnic table.

“Jay’s our outdoorsy guy. This is his arena,” Kristin stated in a confessional.

“This is where he shines,” the celebrity hair colorist added. “Welcome to Jay’s world.”

However, Chuy and Biegs were in for a shock as they didn’t realize they were “roughin’ it.” As the talent agent realized there was no cabin, the business consultant suggested that they head to a hotel. Although, the outing wasn’t without some hiccups for Kristin and Jay as the retired American athlete dropped his phone in the river. Still, Jay reacted very calmly to the accident, giving everyone quite the chuckle.

“If I dropped my phone in the water, I would go home,” Justin quipped.

Regardless, the trip ended on a pleasant note with the group cuddled under a knit blanket by a fire.

“Camping has been great. Really nice for me to just put my phone down, relax, getaway from all the stressful stuff going on,” Kristin relayed in a confessional. “Be out here with all of the people I love the most and just for me to check out for a minute. That’s what work life balance is, right?”

With the camping excursion being such a success, Kristin and Jay invited the group, plus Jack Ketsoyan and Philippa “Pip” Whitfield, to join them in Italy.

For the next Very Cavallari adventure, be sure to catch next week’s all-new episode!

Watch a brand new episode of Very Cavallari Thursdays at 9 p.m., only on E!