The flyby shots are the closest looks at Ganymede – named for a cupbearer for the ancient Greek gods — in more than 20 years.

Massive craters are highlighted by bright white terrain and “long structural features” the agency said in a Tuesday release are potentially “linked to tectonic faults.”

The JunoCam visible-light imager used its green filter to capture almost an entire side of the icy moon; red and blue filters will be used by imaging experts to present a color portrait later.

The Stellar Reference Unit navigation camera produced a black-and-white image of Ganymede’s dark side as it glowed in light scattered from Jupiter.

Juno is set to send more images from Ganymede in the next few days and the solar-powered spacecraft’s work is expected to provide researchers with “insights into its composition, ionosphere, magnetosphere and ice shell” as well as measurements of the radiation environment.

“This is the closest any spacecraft has come to this mammoth moon in a generation,” Juno Principal Investigator Scott Bolton said in the release. “We are going to take our time before we draw any scientific conclusions, but until then we can simply marvel at this celestial wonder.”

The Juno Mission is a part of the agency’s Marshall Space Flight Center New Frontiers Program and is operated for the agency’s Science Mission Directorate in Washington, D.C. 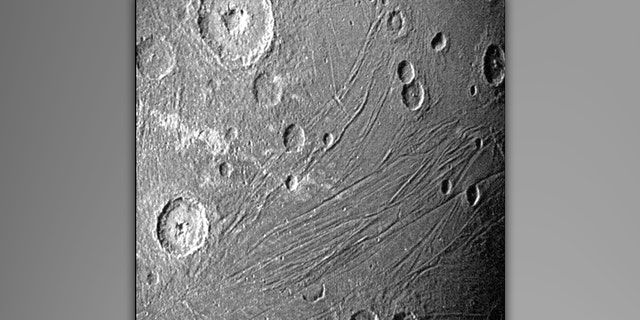 This image of the dark side of Ganymede was obtained by Juno’s Stellar Reference Unit navigation camera during its June 7, 2021, flyby of the moon.
(NASA/JPL-Caltech/SwRI)

“Since its first orbit in 2016, Juno has delivered one revelation after another about the inner workings of this massive gas giant,” Bolton said, “With the extended mission, we will answer fundamental questions that arose during Juno’s prime mission while reaching beyond the planet to explore Jupiter’s ring system and Galilean satellites.”