Skip to content
HomeLifestyle‘She was painful to play’: Claire Foy takes on a very different royal

It might be the folly of each new generation that they think they invented everything. But long before the Kardashians seemed to transform celebrity, and Charles and Diana’s soured royal romance was splashed across the newspaper headlines, there was a scandalous but fearless woman named Margaret Campbell.

In the 1960s, she was a London Kardashian with the only two things that mattered: a title and a tiara. She was dressed by London’s finest couturiers, Norman Hartnell, Victor Stiebel and Angele Delanghe. Her first husband was American businessman Charles Francis Sweeny; her second Ian Douglas Campbell, the 11th Duke of Argyll. And then things went bad. 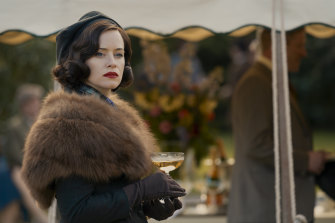 A Very British Scandal, written by Sarah Phelps and directed by Anne Sewitsky, is the story of how and why things went bad. It was the divorce case which shook the aristocracy, an unprecedented clash between spouses in Britain’s courts that shattered the social conventions of the time, amid ugly accusations of infidelity, drug use, violence and theft.

And for actress Claire Foy, it offered a very different turn in a tiara to the more reserved, almost excruciatingly reserved, Queen Elizabeth II she played in the first two seasons of The Crown.

But from the moment she signed on to play the duchess, Foy began delving into the larger historical tapestry of the woman. “I like as much help as humanly possible, so I look at everything I can get my hands on, and I love it,” she says. “The research part of the job is one of my favourite bits. And there was so much to read about her.”

In particular, Foy says, she enjoyed exploring “the books and having a slightly cynical approach to whatever approach the writer had of her. It was sometimes really implicit; the judgment of her, in the books about her. And then there was her book, that she wrote, where she completely ignored any of the gossip about her, which was amazing.” 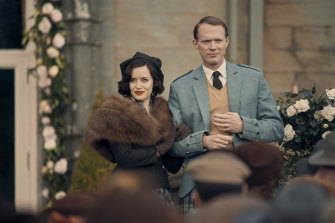 The Duchess of Argyll (Claire Foy) with Paul Bettany as Ian Douglas Campbell, the 11th Duke of Argyll.Credit:Amazon Prime Video

Though the story is often framed as a story of revenge – the Duke’s against the Duchess, and the fierceness of her defiance in the face of the ugly court battle which ensued – Foy sees that as only a piece of the bigger jigsaw. “Revenge plays a part in it, but whether that revenge is justified, I’m not really sure,” she says.

“[The Duke] seems to have a vendetta against her, not for her seeming infidelity – which he was also committing all the time as well – but for her not going quietly and for not just doing what she was told,” Foy says. “I just loved that she wouldn’t go quietly, and she wouldn’t lie down.

Such is the venom in the exchanges between the Duke and Duchess, it almost echoes Edward Albee’s 1962 play (and Mike Nichols 1966 film) Who’s Afraid of Virginia Woolf?, about the disintegration of a marriage over the course of an evening. Unsurprisingly perhaps, Foy reveals that Albee’s play was a creative touchstone. 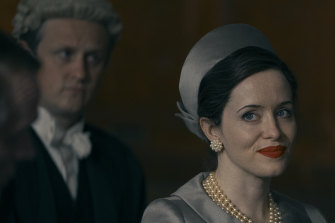 Claire Foy as the Duchess of Argyll whose private life was aired in court.

“Who’s Afraid of Virginia Woolf? was a real kind of thing for us in the dynamic of their relationship and how we could, not try and emulate it at all, but try and make interesting choices like they did in the play,” Foy says. “Maybe with different actors [you would have to take it more seriously], but, unfortunately, Paul and I are completely ridiculous people. We both love laughing, and we also want to enjoy our work.

“There was a limited time to shoot the whole thing, there’s never enough time, never enough money, those sorts of classics, but we really just enjoyed each other’s company. I’m just so grateful that we could have fun and a friendship while we were making it because it just meant that it was always interesting to come to work.”

The Duchess of Argyll was by no means the first celebrity, though when the list of her alleged affairs was read in court, she might have been one of the first women “doxxed”, that is, exposed as a target via the malicious release of private information.

“Her response, instead, was ‘how can this be allowed?’ Her innermost thoughts and the things she held dearest in her heart are these romantic relationships; it’s her self-esteem, who she is, what she identifies as [about] being desired and admired. That is a large portion of her character and who she is. To have that exposed, [she asked] ‘how can that be allowed?’ It was heartbreaking to her. And to watch someone that [she] loved go to any means, that there is no line of dignity, or nothing is sacred, [was] just mortifying.

“And then to have people like a prosecuting divorce lawyer speak words that a lover has spoken to you. It’s wrong,” Foy adds. “It’s not that she was ashamed by what was being said … she was ashamed this was happening, that this was allowed to happen and that her husband was allowed to break into her house and steal her property, and then it was permissible in court.”

Because A Very British Scandal and The Crown pass through the realm of Britain’s upper class in the 1960s, comparisons are inevitable, although the two women are tangibly a universe apart. As much as Elizabeth II was stitched up service, reserve and omniscient power, the Duchess of Argyll is a study in messy temperament. In many ways she is not the story’s villain. But equally, at times it is difficult to see the essential heroism – or anything redeeming – in her character.

“It was really amazing to play someone who behaved, basically, like a child,” Foy says, laughing. “Everything was everyone else’s fault. She was emotional, very able to scream, and shout and cry. In her book, she cries at a drop of a hat. She’s saying she’s crying all the time. I don’t think she was. I think she was able to live her life without tears the majority of the time, but pretty emotionally on the edge, but then also not emotionally eloquent.”

Equally, Foy says, it’s “delicious, really because you get to watch someone make awful choices, awful life choices. I love acting, and I hope I play lots of varied, different characters, but [she] was painful to play sometimes; someone that can’t help themselves. They can’t stop themselves.”

A Very British Scandal is streaming on Amazon Prime Video from Friday, April 22.

Find out the next TV, streaming series and movies to add to your must-sees. Get The Watchlist delivered every Thursday.