Lawford-Smith is a “gender critical” feminist, meaning she disagrees with the notion that a person’s gender identity should be given more weight than their biological sex. On campus she is pitched against supporters of transgender rights, who insist trans women are women and who call the likes of Lawford-Smith “TERFs”, an acronym for “trans-exclusionary radical-feminists”. 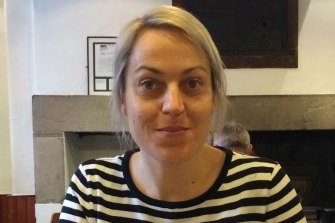 When Vincent and Lawford-Smith first met, the former had recently started writing about trans identity – adding to her eclectic interests in law, neuroscience and ethics of emerging technologies – so the two scholars struck up a conversation.

Vincent laments some of Lawford-Smith’s language and tactics that are unnecessarily inflammatory and distressing to trans women, who are a uniquely vulnerable group. But she sympathises with aspects of the gender critical position. In Vincent’s view, denying access to women’s changing rooms, prisons, and rape shelters to people who identify as female but have not undergone surgery is neither clearly transphobic nor unreasonable.

I suspect that if the university was to audit every undergrad arts subject for content that’s crude, dogmatic and idiosyncratic then the humanities would be decimated without the Morrison government needing to do a thing. 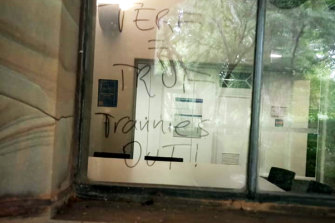 Transphobic graffiti scrawled on a window at Melbourne University in February.

As The Age also reported last week, the university is considering curtailing its policies on free speech and academic freedom to prevent public discourse that has the potential to “harm” transgender and gender diverse members of the campus community.

I’ve tried to figure out what “harm” means in this context but can’t hear my own thoughts above the loud, persistent and often indiscriminate assertions of harm. While neither side in this gender debate is motivated by malice, the tone is nasty because the fight has an existential character: both parties rightly see themselves as victims of patriarchal violence, and both feel as if their safety, and very identity, is at stake. But one side – some in the trans rights camp – seeks to muzzle the other and police the boundaries of legitimate debate. This makes Melbourne University’s draft policy a shameful concession to Twitter-era cancel culture more broadly. To partly illustrate the point, I’ll tell you what happened to Vincent in October 2019.

Vincent was invited to give a public lecture at Melbourne University’s School of Historical and Philosophical Studies. She crafted her talk with two ideas in mind: being transgender is not a mental illness, and that trans people should not feel pressured to “normalise” themselves through medical procedures. To probe our intuitions, she posed hypothetical scenarios, in which gender transitions were easily reversible. Say a pill was invented that could make trans people feel at home in their assigned birth sex. Say a trans person’s genitals could be preserved after gender-affirming surgery in case they later wanted them back. I don’t have space here to flesh out Vincent’s elegant reasoning, but the point is: she wasn’t arguing that medical transitions are sinister, but that there’s something troubling with the idea that there’s a “correct” alignment of sex and gender.

Vincent promoted her upcoming lecture on Twitter, using the hypothetical scenarios as teasers to stimulate people’s reflection. A short time later, a colleague alerted her to an online pile-on. A global community of academics and trans activists was accusing Vincent of being a charlatan, of lacking ethics, of proposing trans people should be lobotomised, of being a TERF, of being transphobic. Her talk, someone said, was “horrific”. One Monash University academic warned that whoever invited Vincent “should be thinking very carefully about what they’re doing to our shared philosophical community”. Another person tweeted, “no way I could listen to this person’s presentation without slapping them”.

Vincent was traumatised. Why would fellow academics savage her without hearing what she had to say? Why all this outrage in search of a target? After a sleepless night and what she describes as “two nervous breakdowns”, Vincent arrived at Melbourne Uni to find about two dozen protesters assembled outside the lecture theatre, demanding her talk be cancelled. One placard read: “TERF graves are gender neutral bathrooms.”

The naked misogyny rattled Vincent. (We might venture she felt “unsafe”.) Still, she approached the demonstrators. She explained a bit about her perspective on trans issues – more about this later. She apologised for any offence her tweets may have caused, but explained that people had misconstrued the nature of her talk. She urged them to come and listen. The overture didn’t work. One protester explained it would now be “inconsistent” for them to abandon the protest given they organised it. Only a few of the protesters eventually attended the lecture, but even after hearing Vincent out, only one young man approached her afterwards and apologised for pre-judging her.

In her nearly three decades in academia, Vincent says she’s never encountered such uncharitable conduct. “I just want to see us talk like real philosophers,” she explained to me. “No slurs, no ad hominems, no innuendo, but just a genuine attempt to understand why the other side believes what they believe so passionately.”

At this point, I should tell you something else about Vincent; something she refuses to define herself by, and something she told the protesters that day in her futile attempt to disarm them. She is a trans woman.

After spending much of her teenage years trying to obliterate herself, she transitioned 30 years ago – and has never looked back.

Julie Szego is a regular columnist.