It’s the final day on Bunitj and Manilikar Country in Kakadu National Park, and the sunrise marks the end of our women-only weaving tour with Kakadu Cultural Tours. Our group of 12 makes the early-morning trek to a nearby billabong situated within the sacred site of Cannon Hill, just a short drive from our camp at Hawk Dreaming Wilderness Lodge.

My fingers are blistered from stripping pandanus leaves, insect love bites are imprinted on my skin (they will become month-long souvenirs), and the red earth of Kakadu clings to the soles of my feet. 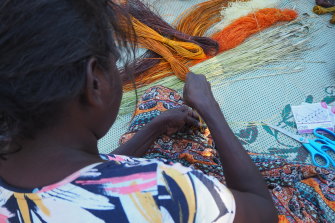 Over the next few days, colourful baskets, mats and jewellery started to take form.Credit:Anna Kantilaftas

I stumble on the quartz-laden ground, feeling the golden energy from the sun’s early rays as it rises on the horizon and turns the sky into a moving masterpiece of pastel colours.

Behind me, the moon begins to recede. A tall sandstone structure of compounded red dirt overlooks a calm billabong, framed by red lilies and vibrant green reeds hiding ancient reptiles below the surface.

The group sits together, unified in silence atop the sandstone hill, the stillness interrupted only by fleeting birds and the occasional crocodile, gliding through the water and sending ripples across the surface.

The trip had begun six days earlier, when we boarded an oversized four-wheel-drive bus in Darwin. The atmosphere was apprehensive as we journeyed towards Kakadu National Park, the idle chit-chat of “Where are you from?” and “What do you do?” gradually fading into silence as we were overcome by wonder.

Our guide, Christie Littlejohn, sat behind the wheel, shouting out local facts over the noise of the engine as we made our way through the mining town of Jabiru – the name, we learn, is a Portuguese word for a large South American stork – towards our camp.

Christie explained that Kakadu National Park, which comprises almost 20,000 square kilometres, is home to six distinct ecosystems – savannah woodlands, southern hills and ridges, stone country, tidal flats and coast, the wetlands, and the outliers. This land has been home to more than
19 traditional-owner clan groups, known as Bininj (or Mungguy in the southern reaches of the park),
for more than 65,000 years.

The road to Hawk Dreaming Wilderness Lodge is a bumpy track hidden behind a sign that reads: Do Not Enter – Private Land. Arriving at our destination, we saw a large, tent-like structure in the centre of a grassy area. Smaller “glamping” cabins/tents surrounded it, each with a comfortable bed, full bathroom, storage space and a small deck. With canvas and fly screens for walls, there was very little between us and the sounds of nature.

The next morning, we met the women who would be teaching us to weave. Sitting in a chair under a shady tree outside the Ubirr Border Store was Anita Nayinggul, along with her daughters, Raphealia and Delane, and niece Rachel.

Within minutes, the language and cultural lessons began. “Shall we go?” asked Christie. Dressed in a blue plaid shirt and bright red skirt, Anita stood up and waved for everyone to follow her. “Yo,” she responded, which we learned was Kunwinjku for “yes”.

The daluk (“women” in Kunwinjku) led us to a nearby reserve in search of a hook stick – a fresh tree sapling that has two parallel branches that can be used to harvest hard-to-reach leaves.

The sun was beating down hard and I could feel my skin burning. I wiped the sweat from my brow and stretched my already aching back while the daluk powered on, unfazed by the harshness of the landscape or the physicality of the activity. 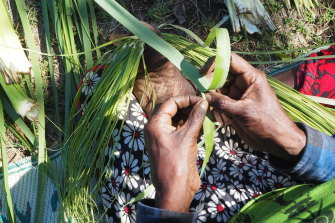 As busy hands worked to weave, pull, weft and coil, I began to understand how cathartic craft could be.Credit: Anna Kantilaftas

With hook sticks in hand, it was time to fill our hessian bags with the fresh, sprouting centre leaves of the pandanus tree. Wandering through Ubirr, Delane and Raphealia hooked the sticks around a leaf and pulled it down with force, causing bunches of spiky palms to bend to our level.

Despite the prickly edges, the leaves are meant to be gripped tight with bare hands and pulled to the ground. It takes the kind of strength I was unable to muster, and I quickly gave up on this part of the foraging in exchange for a rock-art tour with Anita, who shared memories from her childhood as well as stories from the Dreamtime, aided by the remarkable ancient paintings decorating the rock faces we passed.

“I remember my daughter Raphealia sitting here with her grandfather as he told her stories,” recalled Anita at one site, before sharing a story of boys who stole food and were locked in a cave.

Anita added that Dreamtime stories are a vital part of cultural education as children grow into adulthood. “This is how we teach kids to hunt and not steal. Because the boys did wrong, their families were punished.”

The next day, our understanding of Indigenous culture was deepened when Anita took us to a sacred women’s site in Manngarre Rainforest. As we wandered through the green undergrowth, fluttering with birds and bats while gingas (crocodiles) sunbaked on the banks of the East Alligator River, Anita shared stories from her childhood.

“I once swam across the river from there,” she said, pointing to the Arnhem Land side of Cahills Crossing. “Back then, there were less gingas. No way I’d do it now.”

We crossed a rickety bridge that led us to a site used for women’s business, marked by a banyan tree. Anita called out to the spirits to welcome us to Country, and our group fell silent. For cultural reasons, the story shared at the banyan tree is not mine to tell, but the moment was humbling, unifying and more empowering than any of us could have imagined. 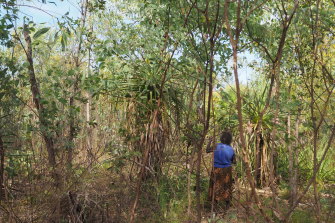 The rest of the afternoon was spent in the surrounding reserves, foraging for natural dyes – we collected plants, berries and roots to colour our stripped pandanus leaves in shades of brown, yellow, pink, green and red. It took hours of delicate digging with sticks, shovels and our hands to carefully remove plants from the earth.

"We take only what we need,” said Anita, reminding us to connect with and respect Country. “When I was young and would go hunting, I didn’t catch enough for just me. I’d have just one little bit and then I’d take the rest home to share with family. All of it. I’m not hunting just for me. I’m hunting for everyone. For family.”

Back at camp, it was time to get our hands working as we boiled our dyes and stripped pandanus. Each leaf is delicately split in half using a process that requires agile, resilient fingers, and a lot of patience. It took me three hours to get my first separation, and by the end of the day I had managed just 10 poorly stripped leaves, while Anita and Rachel had finished the remaining bags.

Over the next few days, colourful baskets, mats, jewellery and unknown objects would start to take form. The frustration of broken pandanas strings and missed stitches gave rise to plenty of swear words and harsh self-criticism, but we were calmed by the guidance and patience of the daluk. 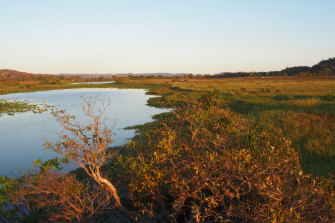 Daily excursions helped to ease the difficulties of learning to weave. We joined a Guluyambi Cultural Cruise down the East Alligator River, guided by Anita’s son Hilton, and walked on the soft sands of Arnhem Land, situated on the opposite side of the river to Kakadu, then enjoyed an evening meal on the top of the rock formation Ubirr as the sun cast its final rays across the ochre landscape.

We were also treated to cultural tours through Jacobs Hand, Seven Spears and other ceremonial and burial sites, and visited Gunbalanya in West Arnhem Land, where we saw experts at work at Injalak Arts and Crafts, which employs more than 300 local community artists.

Inspired by their work, the weaving continued during a picnic lunch alongside a nearby billabong. As busy hands worked to weave, pull, weft and coil, I began to understand how cathartic craft could be. I threaded the pandanus into a couple of loops of what was turning out to be a bowl small enough to fit a 50-cent piece, and noticed that the coils were starting to take shape, getting neater and tighter with each round.

The next morning’s rising sun may have marked the end of our time on Country, but as the group huddled together to take in the magic of Kakadu one last time, there was no doubt that Anita’s lessons extended far beyond the practice of weaving.

Kakadu taught us a lot, but most importantly, it taught us to appreciate the rich variety – the warp, weft, texture and colour – of our stories.

This article appears in Sunday Life magazine within the Sun-Herald and the Sunday Age on sale March 1.