“The scary part for me is just that somebody is sending out stuff with my face all over it, you know, pretty much speaking on my behalf, and I didn’t allow it.” 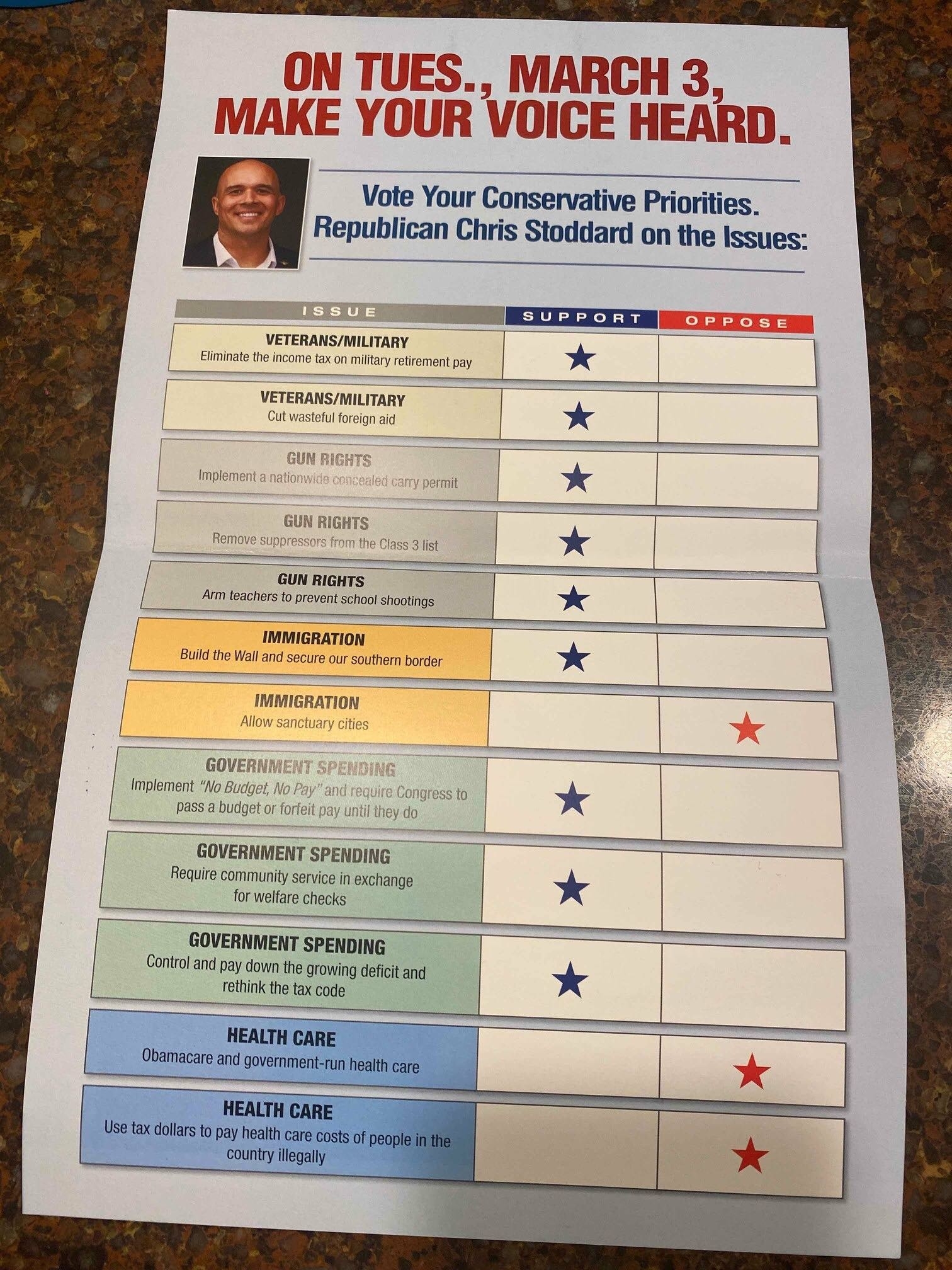 “Get the Facts,” the mailer reads. “Vote for your priorities on Tues., March 3.”

It’s good advertising for Stoddard, a pilot for the U.S. Marine Corps Reserves. The only problem? Stoddard says he has nothing to do with it and has no idea who sent them.

The mailers have no disclosure, as required by the Federal Election Commission for all political mailings and it’s not clear who sent them. The first mailer was first reported by the San Diego Union-Tribune Thursday. BuzzFeed News obtained photos of the second mailer from Stoddard Friday.

Stoddard says he doesn’t want to speculate about where the mailers came from, but confirmed to BuzzFeed News in an interview Friday that they weren’t from him. 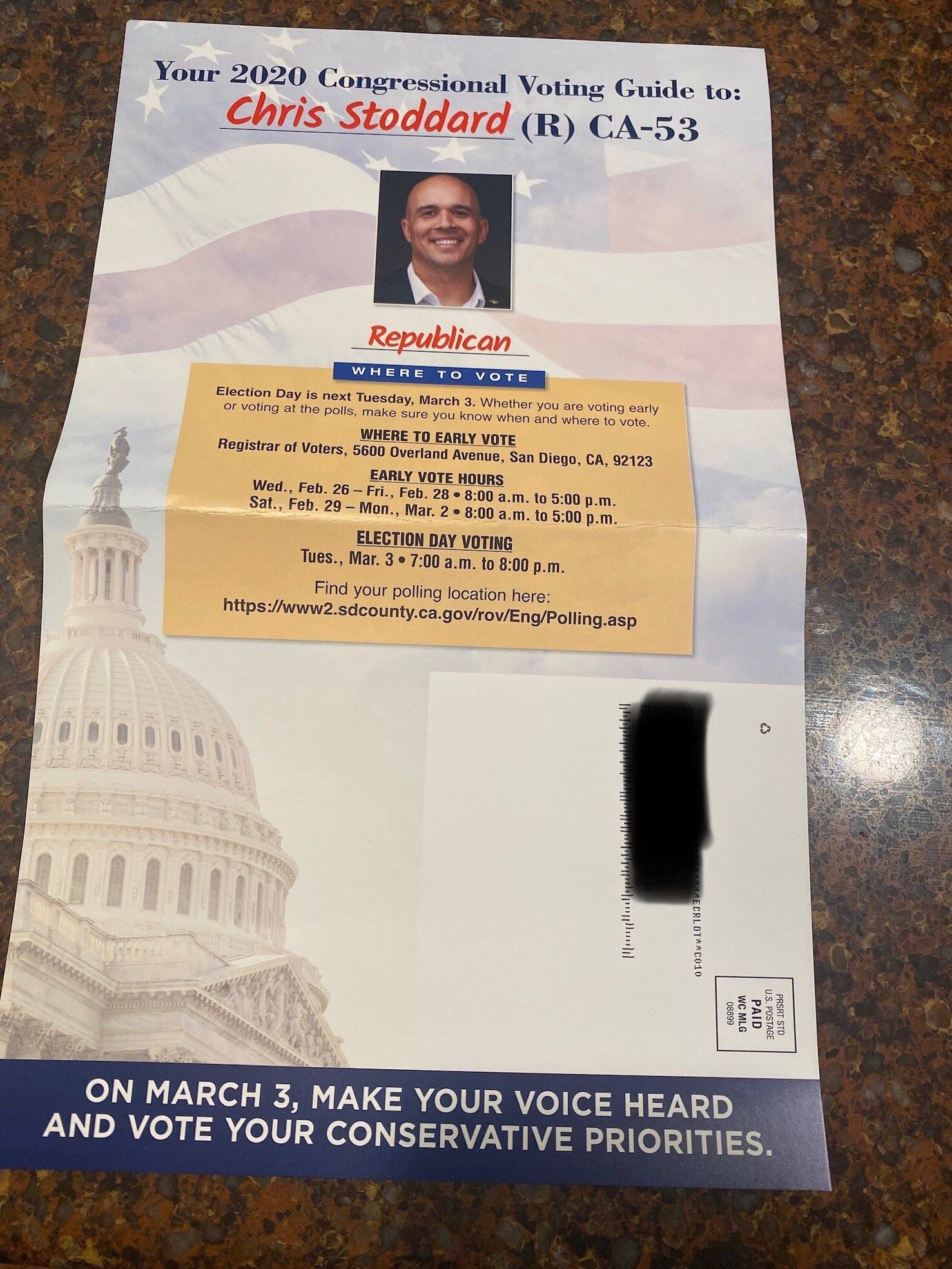 The other side of the second mysterious mailer in support of Chris Stoddard.

Georgette Gomez, a Democrat running in the district who has been endorsed by Sen. Bernie Sanders and Rep. Alexandria Ocasio-Cortez, says she thinks she knows where the mailers are coming from — and she believes they’re an effort to knock her out of the race in next Tuesday’s primary.

California has a jungle primary system, which sends the top two vote-getters in the primary to the general election regardless of party. According to a recent San Diego Union-Tribune/10News poll, Sara Jacobs, a self-funding Democrat running in the district, is currently favored to finish first in the primary on March 3, polling at about 23%. Gomez and Stoddard polled at 5% and 10%, respectively.

Gomez’s campaign told BuzzFeed News says they believe the mailer is coming from Jacobs’ campaign or Forward California, a super PAC formed in January of this year to support her campaign — and funded entirely by Jacobs’ billionaire grandparents. Jacobs’ campaign has denied sending the mailers.

“It’s clear that somebody with resources is trying to influence voters, and they’re doing it and without even putting disclaimers. That’s intentional,” Gomez said in an interview with BuzzFeed News Friday. “This person that is getting lifted has no money… [Stoddard] has not shown up to any of the debates, so there’s clearly somebody trying to lift somebody who, just on paper, he’s running. We know for a fact that it’s not the Republican Party doing it.”

The Gomez campaign filed a complaint with the FEC earlier this week arguing that Jacobs or Forward California is illegally sending mailers without disclosures. (Stoddard said the Gomez campaign never reached out to him to ask if it was him sending the mailers.)

The Jacobs campaign told BuzzFeed News that they didn’t send the mailers and don’t know who did.

“This is the type of silly, baseless attack you often see right before Election Day, and voters are tired of it,” Morgan Hill, a spokesperson for the Jacobs’ campaign, said in a statement. “Quite frankly, we expect better from fellow Democrats. Sara will stay focused on talking to voters about what she will do to make their lives better, as she has been doing throughout this campaign.”

“This mailer did not come from our campaign. If this mailer was sent out with the intention of helping our campaign, we fully disavow it,” Jacobs campaign manager Amy Kuhn said. “We have been fully transparent in all of our communications and we believe all others should do the same. We believe all pieces of paid communication should state who paid for it.”

The Jacobs campaign also ran a television ad this week comparing and contrasting Jacobs to Stoddard, and didn’t mention any other candidates in the race.

“It is, you know, either an insane coincidence that [the mailer] happened during the same week, or, you know, what we believe is that it came from her,” Gomez’s campaign manager Elijah Lefkow told BuzzFeed News Friday.

Stoddard said he only learned about both mailers when a friend of his who received them told him about them. The information on the mailer is taken almost exactly from Stoddard’s website, he said, though in some cases it frames his positions differently than he would.

“It says [I] oppose immigration to allow sanctuary cities, it says oppose Obamacare and government-run healthcare, and it says oppose using tax dollars to pay health care costs for people in the country illegally,” Stoddard said. “I mean, I’m not 100% against health care for all, [but] I’m not really for the Affordable Care Act, because it did affect a lot of people in a negative way. So, you know, I guess it does align with my views, it’s just an interesting way they put it on here.”

Right now, he says he’ll take the free advertising, but he does worry that whoever is sending them could turn against him.

“The scary part for me is just that somebody is sending out stuff with my face all over it, you know, pretty much speaking on my behalf, and I didn’t allow it,” he said. “So I don’t know if this is a setup where, at some point, one of them’s going to come out just blasting me, you know, but without knowing who it came from, it’s a little bit scary knowing that people can just do this.”