This has been a hard piece to write. For anyone interested in human rights, be it students or professionals: human rights are not a bleeding heart, left-wing or elite interest – as they are so often spun to us by political parties, talking points in hand.

Human rights are about basic decency, egalitarian philosophy and putting yourself in someone else's shoes. It's as simple as that. No ideological tags required. It's a matter of right or wrong – our instincts tell us that.

The imminent release of the TV series Stateless has been challenging for our family. Set in a detention camp, it taps into the story of my sister Cornelia Rau who, although an Australian citizen, was unlawfully detained for 10 months in 2004 and 2005. We feel this anxiety despite every effort by a wonderful team of writers, actors, cinematographers and musicians.  Cornelia herself and many people involved in her plight were fully included and consulted. 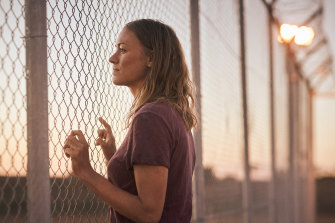 Yvonne Strahovski plays Sofie Werner in Stateless, in a role with parallels to the real-life plight of Cornelia Rau.Credit:Ben King

It wasn't the production company's fault that blood, sweat, tears, heartache and generational family conflict arose at times. It was inevitable someone would revisit a "historical" story.

As a journalist, I have been challenged by the ethical conundrum that arises when professional skills and a personal code of ethics coincide and sometimes come into conflict. For example: how can you be scrupulously objective when telling an intensely private family story?

Cornelia herself and many people involved in her plight were fully included and consulted.

Suddenly becoming involved, almost overnight, in a political furore involving your own clan is like tumbling along a tightrope. But to keep things in perspective no one in our family has died, unlike many of those who've also been unfairly detained in Australia's prison camps.

Questions, the lack of answers and the sheer frustration encountered in this kind of historical reflection, is often a stimulus for people in creative fields. That is why comedy is often a cloak for darker and more serious subjects.

As Cate Blanchett, an executive producer on Stateless, said in The Saturday Paper recently , the interwoven issues of Australia's shameful indefinite detention regime throw up far more questions than answers.  "Throwing up" being the operative term.

I remember throwing up in shock after hearing some details of how Cornelia was treated – without the rule of law, without transparency – first in a maximum-security women's prison in Brisbane and then in South Australia's Baxter detention centre. Without a lawyer, judge, jury or advocate. Without even her name.

Cornelia ended up in detention due to a mental illness. She has no recollection of her six months in the Brisbane jail and her four months in Baxter, near Port Augusta, much of that time (more than five weeks) spent in solitary confinement. 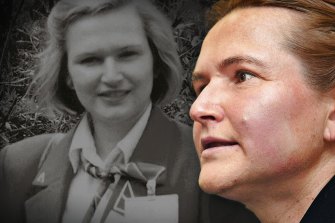 Cornelia Rau at a press conference in Adelaide in 2005 (right) and before her detention.Credit:David Mariuz

Revisiting all this 15 years later brings back strong emotions. As do the baffling physical conditions, including psoriasis of the scalp and eyebrows. For Cornelia, who remains the focus here, it has caused irreversible neurological damage. Today she is still under legal guardianship and a community treatment order.

Some sort of damage, emotional or physical, is not unexpected when he hear the horrendous stories of those who have suffered Australia's cruel and inhumane punishment of anyone who arrives by boat. Even our refugee advocates all have some form of PTSD.

One phrase all the experts I have talked to, who specialise in law, medicine and human rights, used was this: it was necessary for all of us to "bear witness".

There are atrocities being committed in our names.

We are not stupid as a society. So when we elect governments, we must – by our indifference – be complicit in the bullying and ill-treatment of others, as long as we can stick our heads in the sand.

Sorry. That is not good enough. It's irresponsible.

While Cate Blanchett and Matchbox Productions tried for seven years to steer Stateless to air, a chorus of naysayers put obstacle after obstacle in the way.

For many politicians, the fear of a small rump of shrill reptiles in my industry initially prevented people funding Stateless via grants from a shrinking arts purse. Until the sheer passion of the team involved cut through with even the most hard-hearted of investors. Still, it was touch and go.

The key motivation for writing this piece is to shield both Cornelia and my parents from undue attention. And to the person who sent a creepy, unstamped envelope with a handwritten card threatening my then eight-year-old daughter with kidnapping to our suburban letterbox: you're a coward and a bully.

The debate over detention has been characterised by a shortlist of lack: Trust. Integrity. Authenticity. Truth. Decency. Civilised discourse. The simple instinct that says love is better than a gun or a barbed-wire fence.

On the eve of Stateless going to air, it is important to add a word of caution.

There are two clauses in the 1944 Journalist Code of Ethics which I'm quoting now to tell a particular cohort of "commentators" – including social media users and bloggers who think they're exempt from defamation law – to back off my sister.

One: never exploit a person's vulnerability or ignorance of media practice.

Two: respect private grief and personal privacy. Journalists have the right to resist compulsion to intrude.

To a particular cohort of “commentators” – including social media users and bloggers – back off my sister.

Melbourne-based barrister Julian Burnside put it best to me, commenting on the Palmer report into Cornelia's case and other detention issues: "[People's health and rights] are not an abstract concern.

"Its exercise of these powers is often misguided, wilful or capricious. Don't believe this? Watch Stateless."

Following this story as objectively as possible, I have met some extraordinary people from all walks of life who form part of Australia's own underground railroad. Who believe in empathy over "lawyers, guns and money". And some of them are lawyers!

But if Cate can stick her head up, so can we all.  As does Julian and so many unsung heroes.

It may be called soft power, but politicians and military thugs from Russia to North Korea fear it.

A collective voice is stronger than you think.

Stateless starts on the ABC on March 1.

Whenever I reflect on the Cornelia Rau inquiry, conducted nearly 15 years ago, a number of issues always bubble quickly to the surface of my mind. They surface not only because of their crucial importance but because, sadly, of their ongoing relevance to public life and bureaucratic process.

If we are to adequately protect human rights and individual liberty we must ensure government policies which potentially impact on rights and freedoms are accompanied by review and accountability provisions sufficient to provide the public with confidence that the powers are being exercised fairly, justly and with integrity.

A bad decision once made is frequently defended.

But in government policy the ends must never be allowed to justify the means. If that happens, the pain will always outweigh the gain.

The surest way to undermine strong government policy is to unlawfully or improperly apply it.

A government's willingness to objectively and rigorously review public policy when allegations of abuse or misuse are credibly raised is at the heart of – and critical to – good honest governance.

When it comes to history we are poor learners.