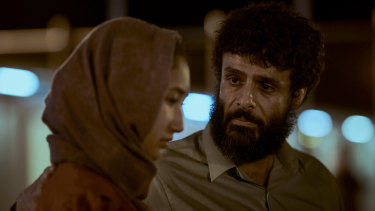 Fayssal Bazzi is the odd one out on the poster for the ABC’s six-part refugee drama series, Stateless. In the company of three famous blonde actors (Asher Keddie, Yvonne Strahovski from The Handmaid’s Tale, and Cate Blanchett, series co-creator with Elise McCredie and Tony Ayres), Bazzi’s difference is striking. He’s the lesser-known actor and the only male in the picture. And, having grown a beard for the role of Afghan asylum seeker, Ameer, he represents a Middle Eastern stereotype. It’s one with which the Syrian-Lebanese performer has struggled since 9/11 coincided with the blossoming of his career.

“It’s hard not to notice fear through people’s eyes. My career was starting, and then you find the roles you get offered are ‘fourth terrorist from the left’. It’s that stigma. People jump to conclusions and the fear takes over instead of education," he says. "In the early 2000s, there were people judging me before they knew me.”

Bazzi, whose recent work includes Netflix series Mr Inbetween, US action thriller Chosen and country AFL movie The Merger, for which he was nominated for an AACTA award, was forced to revisit that period for Stateless.

Illustrating parallels with the case of Cornelia Rau, the Australian woman who was wrongfully detained in 2004 at the Baxter Detention Centre, the series invokes the Howard era of mandatory detention. Lives collide, including that of Strahovski’s Rau-inspired character, Keddie’s immigration bureaucrat, and Bazzi’s refugee father.

You strip away the ethnicities and we’re all the same.

“I see part of my dad in Ameer. He has family in Syria. I want people to see themselves in him, to put themselves in his situation as a father who’s trying to find safety for his family. Everyone can relate to that. You strip away the ethnicities and we’re all the same.”

Already fluent in Arabic, Bazzi learnt the Afghan language of Dari from the father of Soraya Heidari, who plays Mina, Ameer’s eldest daughter.

“Dari uses the same alphabet [as Arabic], so I could read the words but I didn’t know what they meant. Soraya’s father is an interpreter in Dari. I got close with his family, so I was immersed in the Afghan culture. I wanted people to be able to connect with Ameer and relate," he says. "There’s such a beautiful and strong Afghan community in South Australia, which is where we did the majority of performing. I felt so, so lucky to be able to have that experience with them all.”

Many of the extras who pace the reconstructed Baxter Detention Centre in the series have spent time in immigration detention camps, and would often recount traumatic experiences during takes.

“It was confronting but I also felt so blessed that people were comfortable enough to share their stories with me. There are stories I’ll never forget. I think that’s my biggest take away from this," he says. "It’s really easy to get lost in the news coverage, but it’s important to realise that these are real people reaching for better, safer lives. This will continue as long as there are wars.

"If we can open up a dialogue and have more understanding and compassion, because we have the space. We just need to understand and respect each other more.”

Bazzi has returned to his first love – theatre – appearing alongside Stateless castmate Marta Dusseldorp in the Sydney Theatre Company’s post-World War II play, The Deep Blue Sea. But Ameer is a character that will have a lasting impact on him.

“It’s hard to get a role these days that has so much depth and honesty and truth in it. It’s about letting people know this is what’s happened to our new Australians. This is the new face of Australia. This is what they’ve gone through to become Australian and sometimes I think we take that for granted.”