TESCO has topped the list for supermarkets providing charging for electric car owners, according to an independent analysis of EV facilities across the UK.

The supermarket, in partnership with Volkswagen and Pod Point, has installed charging points across 400 of its stores across the UK. 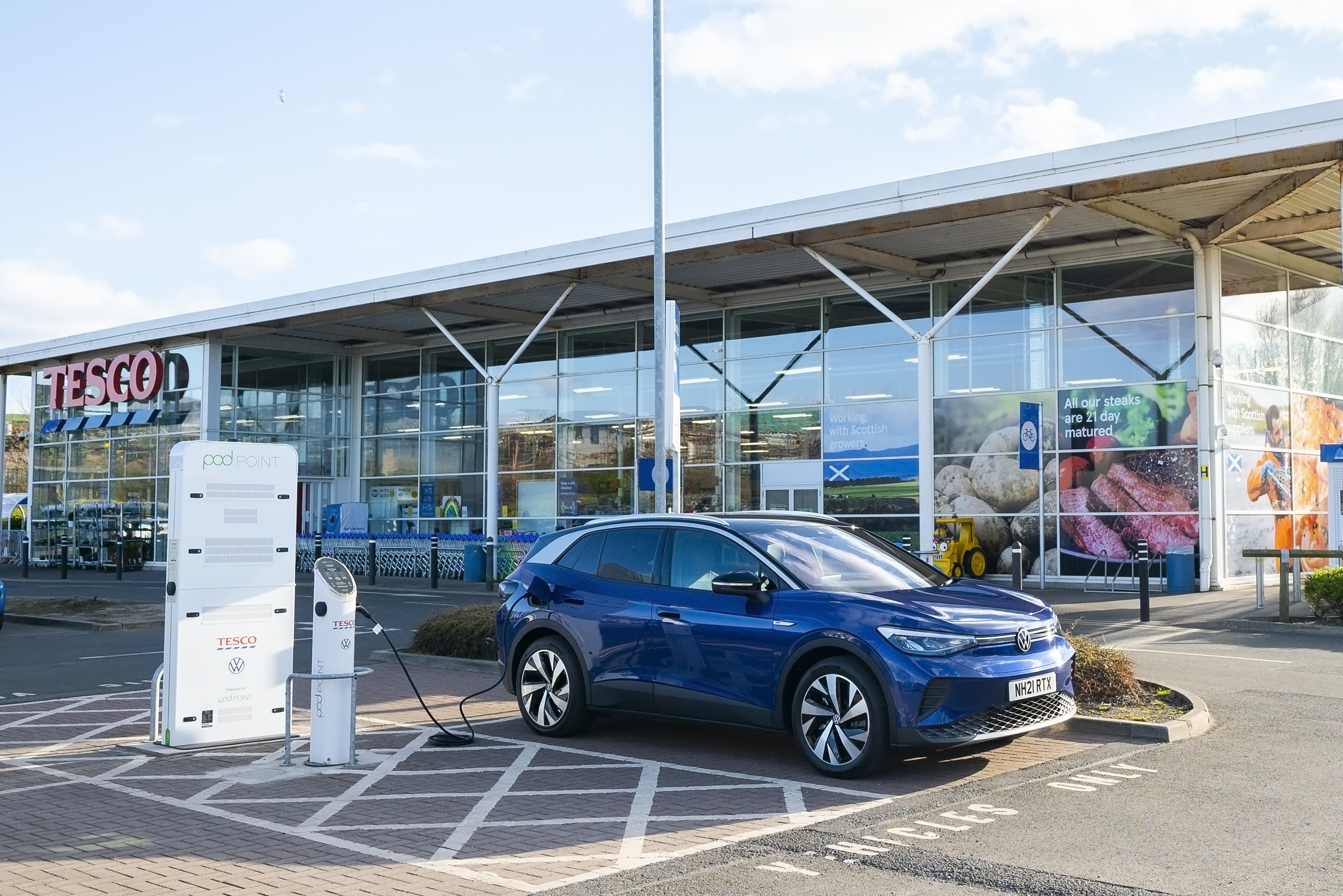 Overall, almost half (45%) of its total stores, not including smaller express sites, have charging.

Morrisons is the second-best supermarket for EV owners, with just over 40% of 497 stores offering customers the ability to charge, while nearly one in five (19.71%) Asda locations provide at least one place to plug in.

But electric car drivers who shop at Sainsbury’s face a lottery when it comes to charging their vehicles, with fewer than one in 10 (7.2%) of its stores currently providing charge points for customers.

While Sainsbury’s came out bottom of the pile, Aldi was only marginally better with 10%.

Lidl customers have a slightly better chance of finding a store with at least one charge point, with its hit rate reaching 15%.

The results were revealed in a study by the electric cars website Electrifying.com.

Ginny Buckley, founder of Electrifying.com, said: “Congratulations to Tesco and Morrisons which have both invested heavily to provide customers with good charging facilities. We’d love every supermarket site to offer this, but we aren’t there yet.

“We expected more supermarkets to be doing better, but it’s still great to see how some of them have recognised that offering shoppers reliable car charging is not only good for business but will also help give the nation confidence to make the switch.

“With electric cars surging in popularity and ambitious government targets to ban the sale of new petrol and diesel cars by 2030, providing charging infrastructure at convenient locations is crucial to encourage drivers to go electric sooner, particularly the significant number that don’t have access to off-street parking.”

A recent poll by Electrifying.com, the Department for Transport and the AA revealed almost three quarters (72%) of drivers would be more likely to consider buying an electric car if there was more opportunity to charge at supermarket.

As well as having the highest percentage of stores with at least one charge point, Tesco is also rated best for the average number of charge points per store, with 1.87 chargers per supermarket site.

At Tesco, customers get 7kW and 22kW charging for free, while rapid charging is at the market rate.

Louise Goodland, head of retail partnerships at Tesco, said: “We want to make it easy for people to switch to electric vehicles and are delighted to be recognised as the best supermarket for EV drivers in the UK.

“Transitioning to electric vehicles will play a crucial role in reducing the amount of carbon emissions we produce as a nation.

“We’re working in partnership with Volkswagen and Pod Point to provide customers with charging points to offer them a sustainable choice and giving them the opportunity to charge their car for free while they shop is a little help to make this easier.

“So far we’ve delivered over 23 million miles worth of free, green charges to drivers and we’re continuing to roll out EV chargers to 600 Tesco stores across the UK.”

Responding to the findings, a Sainsbury’s spokesperson said: “We have ambitious plans for our next generation of charging points. We want to offer charge points in more places and create a better customer experience.”

While a spokesperson for Lidl GB said: “We understand the important role we play in helping our customers lead more sustainable lives. As such, we are proud to offer rapid charging points for electric vehicles at 130 of our stores across Great Britain.

“By 2022, we aim to have more than 350 stores with rapid charging points, meaning customers will have access at over a third of our sites.

“We are the cheapest supermarket provider of pay as you go rapid charging, and in 2020, our chargers were the most used across our partner’s entire network.”

Waitrose also has plans to improve its score. It is set to extend its partnership with Shell and roll out 800 new charge points in 100 Waitrose locations across the UK by 2025.

Do you have a story for The Sun Online Money team?