Skip to content
HomeLifestyleThe bacchanal is over, and I’m mourning a house that was never mine

It's not uncommon to fall in love with a house. Plenty of people romanticise their childhood home, or their first apartment, or their marital abode.

You're not supposed to fall in love with your university share-house – especially when it's not even yours. 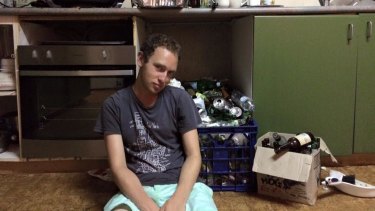 The writer at the house in question.

This particular dwelling, tucked away on a back street of Leichhardt, had all the usual faults and then some: next to a church, under the flight path, basically derelict.

One bedroom was dubbed "the mould room" and its window was to be kept open permanently.

I never lived in this house. I spent the night there once or twice, after one of the legendary parties that took place within its walls. There were two each year; one on January 26, though increasingly with less attachment to the divisive holiday itself, another some months later, dedicated to some form of bohemia. They were calendar-clearers, not to be missed for anything.

Over the years the guest list expanded, if anything, rather than dwindled. There were mainstays, certainly, but newcomers were welcomed into the fold. The average age might have crept up, but in spirit this house was forever 21.

We sat in inflatable pools in the backyard, cheered drag queens as they performed in the living room and kissed strangers in the corridors. We danced to the Hottest 100 on the front porch and yelled about who was robbed (Lorde). We scooped punch from a bowl overlooked by a bust of Zeus our hosts found at Reverse Garbage on Addison Road.

They were more than just parties. They were fulcrums on which the year pivoted, and as time went on they became like cast reunions, imbued with the memories stashed within the house's walls. They were about cementing a sense of wonder and belonging in a world that seemed so itinerant.

"I didn't want to be a typical Millennial who f–ks off every six months, coming and going," recalls the chief bon vivant. "Millennials are always looking for the next thing, 'the grass is always greener'. But this was a commitment to 'the grass is good here'."

The house wasn't just a party den. It was also a refuge – quite literally, for two refugees who stayed there for a while. It was a landing place for young and nervous gay men from out of town, and a base for artists and activists trying to work their way into a difficult world.

All this was enabled by the fact the landlord – the church next door – had struck something of an unspoken deal with the tenants: we'll keep the rent down as long as you don't expect any upkeep.

And so over 12 years, the rent on the main bedroom crept up from just $120 to $150 – a relic of simpler times hidden in the expensive, gentrifying inner west.

Eventually, the main tenants of the house succumbed to turning 30 and bought an apartment in Ashfield. But this being Sydney, they couldn't afford to live in it. So for another four years the good times rolled on, each party invigorated by the threat that it might be the last.

Last week, the day finally, inevitably came. Mould was to give way to marble, and drag shows were to give way to dinner parties. When they moved out they found six boxes of costumes people had left behind over the years, some still coated in red wine. The bacchanal was over.

I hope there are other houses like it out there, defying the market and amassing a family beyond its immediate owners and tenants.

Can you mourn the loss of something that was never yours? Absolutely.