Some hold that a score should subtly create atmosphere for its film.

The screening of the 1970s Italian classic horror film Suspiria at Hamer Hall on Sunday night would have seen such purists squirm. 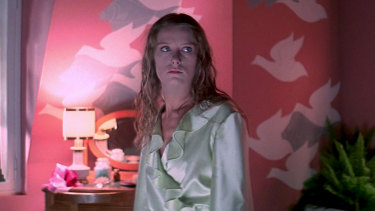 Suspiria’s score was reimagined by King Gizzard & the Lizard Wizard.

The original score was replaced by a live and lavish performance by the guitar, drum and bass trio of psychedelic rockers King Gizzard & The Lizard Wizard – joined by a melange of Melbourne musos including a choir singing Gregorian chants, and a harpist.

An old-school overture saw Fia Fiell pumping out waves of retro synth. A shower of cymbals and rolling tom toms were followed by driving bass guitar and a lick of electric.

Minutes passed before the screen lit up, the opening title accompanied by a hysterical scream. The tone was set: this would be a night of schlock and horror.

So loud was the music during the first few scenes it drowned out the rain storm lashing the German city into which our New York heroine, dancer Suzy Bannion, arrives.

It didn’t detract. The dialogue was in dubbed, subtitled Italian and, more importantly, the blaring score heightened the sumptuous visuals of this celluloid film, one of the last to be processed in Technicolor which delivers stunning scenes drenched in primary tones.

Gargantuan and labyrinthine, the baroque building dance school at the centre of the story is full of frescoes and ferns, velvet curtains and a Romanesque indoor pool, hidden doors and occult secrets – imagery and themes that anticipate David Lynch and Stanley Kubrick.

The Melbourne Chamber Choir serenaded the film’s over-the-top murders: gruesome, perhaps, in their day, but on this night the copious fake blood drew chuckles.

As the plot got into gear the band settled and allowed the movie to breathe, but there were certain scenes on which the King Gizz boys were never going to stay silent.

A close-up of the sinister head mistress’ black boots stomping over a floor of writhing maggots served as the perfect setting for a metal number.

None of it was subtle, but it was all rollicking good fun.