Koeth began by simply visiting the Exxxotica Expo in New Jersey in 2017 and striking up a conversation with women there, pitching them her idea.

Though Koeth made the process as easy as she could for the women by traveling to them, taking only a couple of hours of their time, and shooting them in their own clothing and at their own homes, the project didn’t come together quickly. For one thing, it took quite some time to reach women who were both interested in the idea and willing to be photographed and tell their story. But after two years, her results are riveting and also surprising in their complete normalcy.

Koeth’s photos from this ongoing project are on her site, with captions based on her interviews written by Laura Lee Huttenbach. Though the focus is on their lives as mothers, work has quite an impact on their lives.

“All but one [of the women] look forward to the day where they don’t have to do this anymore,” she said. At the same time, these women aren’t likely to find another job that pays $2,000 for a day of work. “And then they have those days off, which you wouldn’t get in a normal job, where they’re able to take care of their kids and spend time with them.”

“They encounter so much judgment,” Koeth observed.

Rather than add to the judgment, we hope that as you see their photos and read excerpts of their interviews here, you can bear witness to the stories of these fellow moms.

Makayla Cox, 35, and Her 7-Year-Old Daughter

“With the other mothers, she finds her connection with them depends on the person,” Huttenbach wrote of Cox, a single mom who dreams of moving to Los Angeles and living like a hippie with her daughter. “Some women don’t want to know anything about her work, while others are more open.”

Cameron Candela, 24, and Her Newborn Son

“Before, I definitely embraced who I was in the adult industry and didn’t really care how people thought about it,” she told Koeth and Huttenbach. “I was like, This is what I am, this is who I am, this is what I like to do. Now I like having more of a conservative image and being a mom. That’s been the biggest transition for me, just realizing that there’s still a whole other side of me.”

“I’m a chauffeur,” Mena told Huttenbach and Koeth of life as a mom, driving her daughter to soccer, gymnastics, swimming, and dance. Mena is married and was photographed pregnant with a son.

Nickey Huntsman, 26, and Her 9-Year-Old Daughter 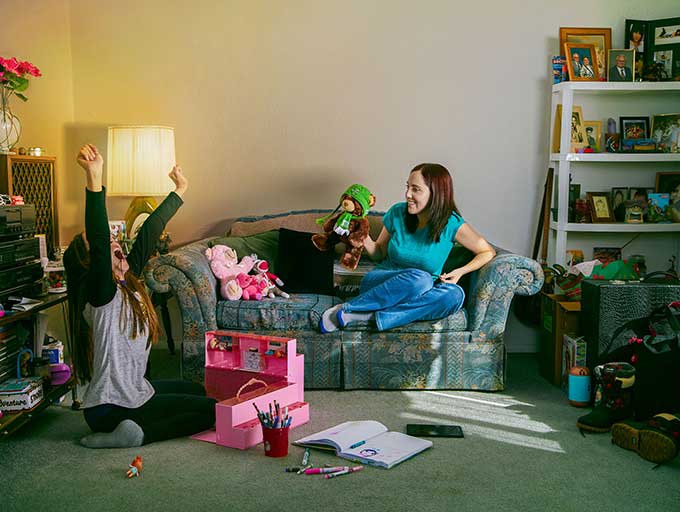 “When I had her, it came automatically with mothering skills,” Huntsman said. “Sometimes you just know that you’re made to do something.”

For more of each of these women’s interviews, visit MBKoeth.com.