As Kristina Keneally stands just a few steps away, Fairfield mayor Frank Carbone is gleefully trash-talking the Labor frontbencher and star candidate for the western Sydney seat of Fowler.

“She’s just come on a holiday for the month and she’ll go home after the election,” Carbone shouts while handing out how-to-vote cards for Dai Le at St Johns Park Anglican Church. 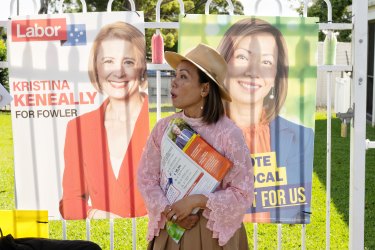 Le, the deputy mayor of Fairfield, is running as an independent against Keneally in a seat Labor holds on a seemingly secure 14 per cent margin but will be one of the most closely watched contests on election night.

The intense atmosphere at the early voting site shows how competitive, personal and dirty – in the words of both sides – the battle for Fowler has become.

Carbone’s dig about Keneally being on holiday sparks an argument with a Labor volunteer who fires back: “She’s living here in Liverpool! I’ve been to her place. Gough Whitlam was parachuted in and was a great prime minister.”

It turns out the volunteer defending Keneally is her mother-in-law Jane.

“They’re panicking,” Carbone says of Labor. “You never thought you’d see the day in Fowler things would be so close.”

A large map displayed outside the church shows the distance between Fowler and Scotland Island, the northern beaches enclave where Keneally previously lived and still owns property. The sign calculates it would take three hours and 10 minutes to travel from Scotland Island to Fowler by public transport and more than 13 hours by swimming and walking.

Le says she is benefitting from disillusionment with the major parties, lingering frustration at last year’s tough western Sydney lockdown and a backlash against Keneally being “parachuted” into the seat. 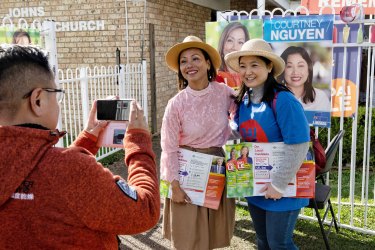 “A lot of people have said, ‘we feel insulted’,” says Le, who previously ran as a Liberal Party state candidate before being expelled from the party.

It’s clear her pitch is cutting through with many voters, including Mount Pritchard resident Barry Brooks. He voted for Le after previously backing longtime Labor member Chris Hayes.

“Labor thought you could run a donkey with three legs and one eye here and people would vote for it,” he says. “I’m voting for Dai Le because I know her. With Kristina, you’ve heard of her. If she gets in it won’t be by

While inner-city independents such as Allegra Spender in Wentworth are also taking advantage of annoyance at the major parties, Le insists: “I’ve got nothing in common with the teal independents. My community here is the opposite. This is a multicultural, working-class community, full of children of migrants and refugees.”

Median household incomes in Fowler – which includes suburbs such as Cabramatta, Liverpool and parts of Fairfield – are half that in Wentworth, and the unemployment rate is much higher. Six in 10 Fowler residents were born overseas, with an especially high number of people of Vietnamese, Middle Eastern and Chinese ancestry.

Le – who was born in Saigon and emigrated to Australia as a refugee – speaks to voters in Vietnamese or English, depending on which they prefer.

While inner-city voters may be fired up by climate change and a national integrity commission, Le says voters in her area are focused on hospitals, car parking, the NDIS and housing affordability. 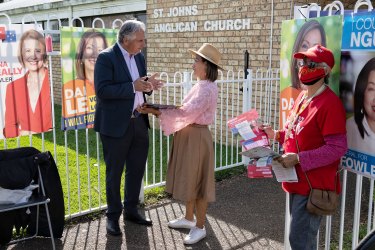 “It’s about putting food on the table here.”

Although Le’s name is on the ballot, she is essentially running on a joint ticket with Carbone, the brash independent mayor who won 74 per cent of the vote at last November’s council elections.

Both Carbone and Le were passionate critics of the NSW government’s lockdowns, saying tougher rules were applied to western Sydney residents than those in the wealthier eastern and northern suburbs.

“Dai Le and Frank were standing up for us, sending meal kits out for people. We were forgotten during the lockdowns,” Katherine Allen, a disability support pensioner who lives in public housing, says. Firing up voters by singing “Dai Le, Dai Le” to the tune of Dolly Parton’s Jolene, Allen says volunteering for Le is the first time she’s been involved in politics. 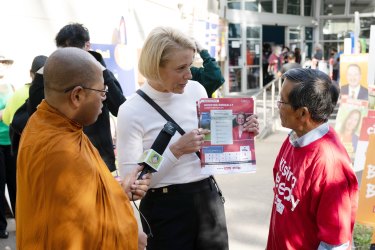 While Le is trying to localise the contest, Keneally is working to nationalise it. “This is how you vote for a Labor government,” she says while handing out her how-to-vote cards. A Labor sign outside the church pictures Le standing next to Scott Morrison, warning: “Don’t risk a Liberal government.”

Speaking to the Herald, Keneally says: “The reception has been very warm. People are so keen to change the government.”

Her message resonates with 25-year old Andrew Leung, who says: “I’m voting Labor, I want to turf the government out.”

The fact Keneally has come from the other side of town, he says, “doesn’t really matter” to him. 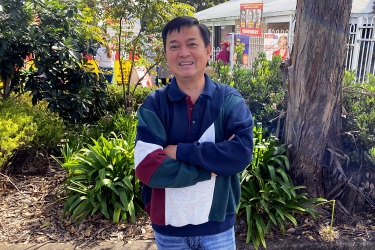 Fowler resident Kim Luu says he is no longer voting for Labor because it has taken the Vietnamese community for granted. Credit:Matthew Knott

It’s a different story for IT consultant Kim Luu, who voted for Le after previously supporting Labor. He says he would have voted for the party again if it had chosen Hayes’ preferred successor Tu Le, a Vietnamese-Australian lawyer, as its candidate.

Luu says he has been deluged by text and voicemail messages linking Le to the Liberal Party and Labor volunteers have falsely told people they would be kicked off unemployment benefits if the Coalition is re-elected.

“In 40 years in Australia I’ve never seen such a dirty campaign,” he says. “Labor is scared.”

NSW Labor sources insist Keneally will win the seat, dismissing as dodgy a poll published this week showing Keneally on 45 per cent and Le on 38 per cent. But it’s clear the result in Fowler will be far closer than any time in recent history.

“After this election, it won’t be regarded as a safe seat,” Le says.

Cut through the noise of the federal election campaign with news, views and expert analysis from Jacqueline Maley. Sign up to our Australia Votes 2022 newsletter here.