Skip to content
HomeLifestyleThree mobile down: Thousands of customers unable to make calls, send texts or use internet

MOBILE network Three is down with thousands of customers complaining that they can't make calls, texts or access the internet.

Outage tracker DownDetector reports that more than 2,000 Three users have complained about the lack of service. 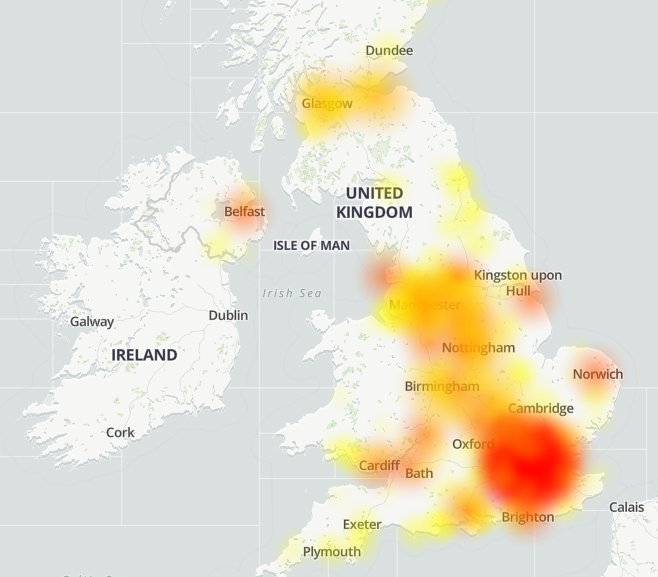 DownDetector relies on customers to actively tell it that they are experiencing problems with a particular service.

According to the site, the problems appeared to start at around 9am this morning, peaking at 9:30am before tailing off again at 10am.

The outage is affecting customers across the UK, in cities including London, Glasgow, Liverpool, Bristol and Birmingham.

Around 51% of the customers who complained have said they are experiencing issues with their phone, while 25% are having problems getting signal.

Can I get compensation if my mobile network goes down?

IF your mobile network goes down then you aren’t guaranteed compensation.

But if you feel that an outage has caused you significant problems or you've waited a long time for a repair to take place then you should complain.

You'll need to give your provider a "reasonable opportunity" to deal with the issues, according to regulator Ofcom.

If your provider fails to repair the fault by a promised time, or you’re unhappy with how long it took to fix it, you should follow the official complaint's procedure for the network.

If you're been without service for a while then you may be able to leave without paying an exit fee.

Make sure you have screen grabs on your phone that can be used as evidence of the outage and that you've noted down how long you were unable to use your phone for.

You should also be specific about any extra costs incurred as a result of the outage too as you may be able to get your money back for those as well.

It's worth submitting copies of any receipts or bills which prove any spending you've had to make because of the outage as this will strengthen your complaint.

If your problem is still unresolved after eight weeks you can submit your complaint to an independent Alternative Dispute Resolution (ADR) scheme.

Networks have previously offered credit or freebies to customers affected by nationwide outages.

Up to 22% of the complaints recorded are from customers who are struggling to access the internet, according to the monitor.

Frustrated Three users have taken to Twitter to express their anger at being left without a functioning phone.

One user wrote: "Oh great @threeUK is completely down again… I will be switching in Feb."

Another said: "What's the problem this time?! No signal, no data."

Rebecca added: "My data suddenly disconnected about 30 minutes ago and despite re-starting my phone a few times, it's still not working…"

One user in Durham wrote: "What has happened to the service this morning? No signal, can't make/receive calls, send texts etc. I live in Durham." 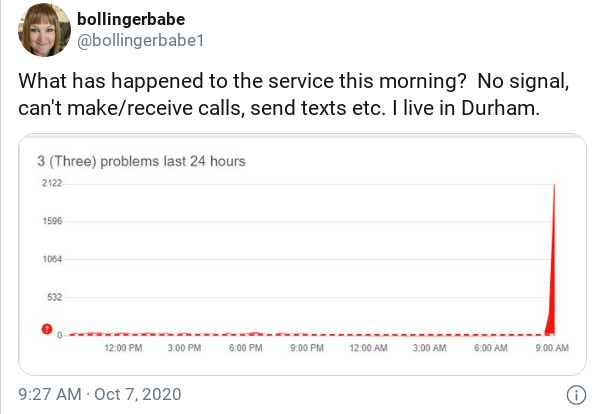 The outage comes when many people are relying on the service to work from home, according to the government's coronavirus guidelines.

Amy said: "Hi @ThreeUK it's becoming impossible to work from home when you have no service.

"This is becoming more and more common. What's going on?"

Three mobile has around 10million users around the UK.

The Sun has checked a London postcode on the network's service page where it said it was working on fixing an issue in the area.

Three adds that updates to the works will be posted on the service page on its website.

A spokesperson told The Sun: "We are aware of an issue with the network and are working hard to fix it.

"We know how vital communications are at the moment and are sorry for any inconvenience caused."

Three has not specified what has caused the issue or when it will be fixed.

How to check if Three Mobile is down?

Three Mobile has a service checker so you can see if there is an issue in your area or nationwide.

You need to enter your postcode so it can give you an update for your area.

If you want to make a complaint then you an do via phone, web chat or letter.

Three has a dedicated page on its website where you can find the complaints information.

It's not the only network to suffer an outage. In August, Vodafone customers were unable to make calls or use 4G internet for more then two hours.

Halsey Says Her Pregnancy Was '100% Planned': 'I Tried Very Hard for This'