TOM UTLEY: I wish religion was as easy to take up as, say, colonic irrigation. If so, I’d sign up like a shot

As my mother lay on her deathbed, visitors who asked her how she was feeling would get one of three answers: ‘I’m very well, thank you’; ‘I’m blooming’; or, ‘I’m in the pink’. You didn’t have to be a consultant oncologist to realise this wasn’t strictly true.

For one thing, she was so ill towards the end that she could barely get the words out, speaking only in a hoarse whisper. Nor could she move without acute discomfort — and, far from being in the pink, she was a grim shade of yellow-grey. But, right up to the day of her death, she would always insist that she was fine.

Of course, this was partly because of her upbringing. Like so many of her wartime generation (she was born in 1927), she had been taught that, no matter how terrible one might feel, it was frightfully bad form to complain about one’s health.

‘Very well, thank you’ (or words to that effect) was the only acceptable answer to the question: ‘How are you?’

But I don’t think this was the full explanation. After all, in the course of my 66 years on this earth, I’ve met plenty of people of her generation who bellyached no end about their health, listing their aches and pains in more detail than many of us would like to hear. 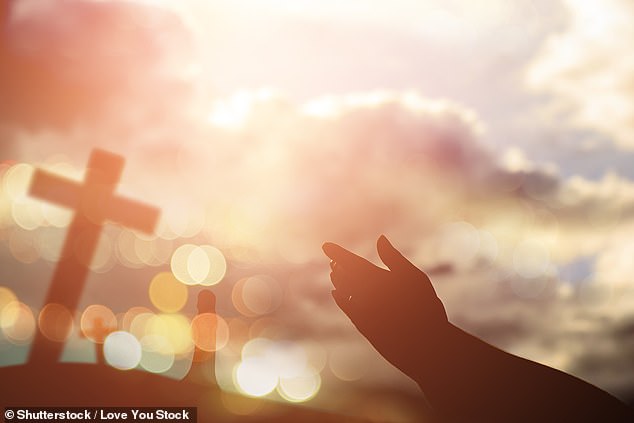 I reckon my mother’s stoical acceptance of her suffering and her almost total lack of self-pity owed, more than anything else, to her profound, unquestioning Roman Catholic faith

No, I reckon my mother’s stoical acceptance of her suffering and her almost total lack of self-pity owed, more than anything else, to her profound, unquestioning Roman Catholic faith. It really did make her feel better.

I’m not saying she was some sort of saint — she would have hated the suggestion of any such thing. She loved her gin and tonic, swore more often than many would think ladylike (I put that down to her being the daughter, wife and mother of journalists) and could laugh and b**** with the worst of us about people she didn’t like.

Indeed, I well remember a friend who’d had breakfast with my parents saying he had never heard anything so uncharitable as the pair of them mercilessly mocking the people they had met at a party the night before. My friend told me that he dreaded to think what they might say about him the moment he was gone.

My mother would also have been appalled to hear me describe her as religious. I know this because I vividly remember a couple of her answers when she was grilled by a doctor on her admission to the hospice where she died.

First, she was asked a few questions to assess whether she still had her marbles. For example, who is the Prime Minister?

Next came a few practical matters about her stay in the hospice. Did she have any special dietary requirements? None. Were there any members of her family she would prefer not to see? After a pause, for what I hope was comic effect, she laughed and said: ‘No, I love them all.’ This was just as well, since most of us were gathered around her bed.

Finally, the doctor asked: ‘Are you religious?’ She looked affronted, and answered emphatically: ‘No!’

My siblings and I were astonished. It was the elder of my two sisters who reminded her that never in her life had she missed church on a Sunday — and that, for the past few years, she had been to Communion every day of the week.

‘That doesn’t mean I’m religious’, she said, as if this was a dirty word.

I think I know what she meant. To her, a religious person was a zealot who went around preaching to others and trying to convert them to the true church.

Her own faith, though no less devout, was of a gentler, less proselytising sort. She expressed it not only in her churchgoing and in her belief in the sacraments, but in her lifelong commitment to charity work on the quiet.

But, other than in my early childhood, she never dragged me to church against my will — and she gave up any attempt to persuade me after I became a card-carrying lapsed Catholic at about the age of 13 (though I’ve no doubt she went on praying for me like billy-o, in the hope that one day I would see the light). 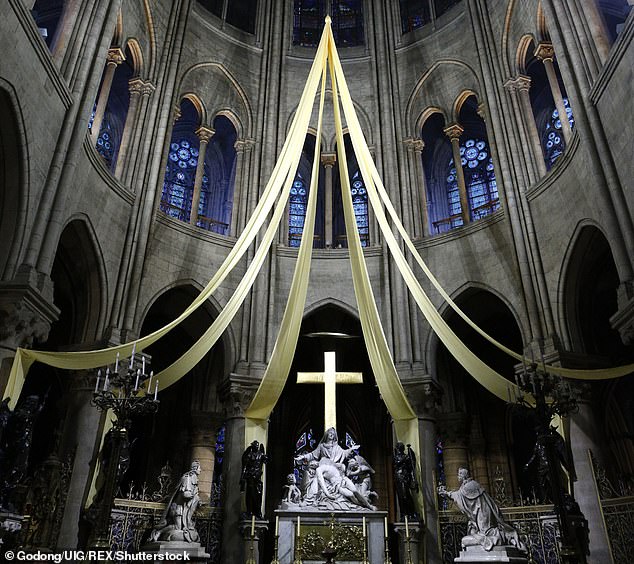 Whether or not God exists, I haven’t the slightest doubt that my mother’s belief in Him, and her trust in His mercy, was a tremendous comfort to her in her final illness (pictured: Choir and Pieta statue, Notre-Dame de Paris cathedral)

Whether or not God exists, I haven’t the slightest doubt that my mother’s belief in Him, and her trust in His mercy, was a tremendous comfort to her in her final illness. I’m also convinced that this went a long way towards explaining her unfailing insistence that she was ‘very well’, when clearly she was not.

It came as no surprise to me, therefore, when the Office for National Statistics reported this week that people who profess a religious faith are significantly more likely than non-believers to say they feel satisfied with their state of health.

In contrast, only 64 per cent of people who declared they had no religion were happy with their health.

Interestingly, this finding almost certainly underestimates the feel-good effects of religion, since the general decline in churchgoing means that non-believers tend to be younger than the faithful, and therefore have fewer physical ailments to complain about (though, evidently, this doesn’t stop them).

Mind you, militant atheists have been quick to cite alternative explanations of the ONS findings. They point out, for example, that non-believers are more likely to be smokers — 18 per cent, compared with 11 per cent of Christians and Muslims, 5 per cent of Hindus, 4 per cent of Jews and 2 per cent of Sikhs —while some religions ban drinking alcohol. No wonder the faithful feel healthier, they say.

Yet I’m much more convinced by Michael Wakelin, chairman of the Religion Media Centre, when he says: ‘I guess this has something to do with an attitude of gratitude. If you are of the opinion that God loves you and He created you, you are more likely to be grateful for what you have.’

He goes on: ‘For Christians, there is an understanding that love and suffering are the two great mysteries that cannot be separated — so perhaps we endure the one in the knowledge that it is part of the other.’

All I can vouch is that this was certainly true in the case of my mother, who believed that Earthly suffering should be ‘offered up’ to the Almighty and borne with serene resignation to His will, as a preparation for eternal salvation.

Far better than the fact that she never smoked, this explains why she met her end with such enviable composure and so little complaint.

As for the moral of all this, I wish that religion were just an alternative therapy — as easy to take up as, say, a course of colonic irrigation or the latest fad diet. If it were, I’d sign up again like a shot.

But I fear it doesn’t work like that. Indeed, if I started going to Communion again now, as a non-believer, the only probable effect on my health would be exposure to a strong risk of catching COVID-19 from the chalice.

To benefit from that feel-good factor, we first have to make the leap of faith necessary to believe — heart and soul. And, much as I yearn to, I find I just can’t.

So perhaps I’m doomed to meet my end moaning about my health, railing against the cruelty of my lot and listing my aches and pains to anyone with the patience to listen.

Or is there still hope my late mother’s prayers will finally be answered — and I’ll be drawn back to the infinite consolation of belief in a merciful saviour?