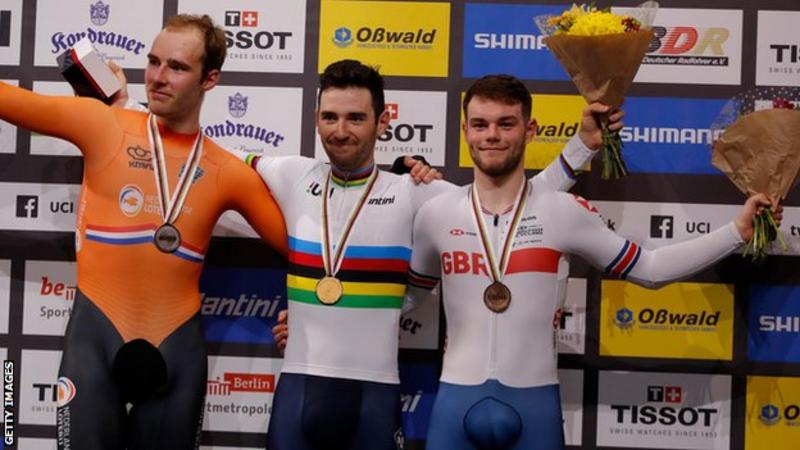 The 21-year-old finished on 117 points behind champion Benjamin Thomas of France and the Netherlands’ Jan-Willem van Schip.

It represents GB’s third medal of the championships in Berlin.

“There’s a lot to learn. I’ll go away improve on it and hopefully if I’m selected for Tokyo it’ll be a gold,” Walls told BBC Sport.

Walls finished second in the opening race of the omnium – the scratch race – gaining a lap alongside Thomas, who also won the omnium world title in 2017.

After the tempo and elimination races, Walls was fifth going into the concluding points race, but the 20 points added to his total from gaining a lap propelled him on to the podium.

“It wasn’t easy, I came in to the points race in fifth after having a shocker in the elimination and tempo races so I was a bit far down,” Walls added.

“But I knew if it went my way I could get a medal and it did. This is a top class field. There are at least 10 riders that could win on a good day.”

Earlier on Saturday, Elinor Barker and Neah Evans finished sixth in the madison after Evans was involved in a heavy crash.

The 29-year-old was caught in between an American changeover, sending her crashing onto the Berlin boards with 22 laps to go.

The madison has been added to the women’s Olympic track cycling programme for the first time for Tokyo 2020.

“In the long run it will be beneficial for us. There’s a lot to reflect on and one thing we do well is analyse and come the Olympics hopefully it will be a very different story for us.”

Barker, who won team pursuit gold at the 2016 Olympics, added: “We weren’t prepared for this kind of race.

“The races from last two years have been almost exclusively won by sprints and having that top end speed and we were not expecting it to be so splintered, so that was interesting.”

‘There are more positives than negatives’

Jason Kenny missed out on the sprint quarter-finals, an event in which he has won gold at the last two Olympics, after being knocked out in the last 16 by Germany’s Stefan Botticher, while team-mate Jack Carlin – who finished fourth in Thursday’s keirin final – was eliminated in the previous round.

The 22-year-old, struggling with an ankle injury sustained during his semi-final, was beaten by Malaysia’s Muhammad Sahrom.

Kenny, Britain’s joint most successful Olympian, said: “It was a good day really in a way, we had a good quality ride, it’s a big step forward for us.

“It doesn’t seem like such a ridiculous gap in front of us now to the front which is always nice. [Botticher] just rode better than I did today. It’s a shame not to get a bit further, get a bit more racing in. That’s what we’re missing at the moment but there are more positives than negatives.”

In the women’s individual pursuit, Josie Knight finished 12th on her World Championship debut, having shaved off five seconds from her personal best.

It marked the 23-year-old’s second world title of the week after also being part of the USA’s team pursuit-winning quartet.