How many calories in YOUR favourite takeaway? BBC documentary reveals there’s under 500 in a KFC but 1,900 in a Domino’s stuffed crust – as viewers vow they’ll ‘never have’ fast food again

Viewers have been left shocked after a BBC documentary revealed the amount of calories, fat and sugar found in six popular takeaway dishes.

The Truth About Takeaways, which aired at 8pm last night, delivered the startling information that a large Domino’s stuffed crust pizza contains almost 2,000 calories – approximately the recommended daily total for a woman.

To the surprise of Twitter users, a KFC snack box – which contains a piece of chicken and fries – has just 475. The fast food also ranked best on sugar and fat content.

The chain’s rival McDonald’s also scored well in the experiment, with a Big Mac and medium fries containing 780 calories.

A standard chicken korma, naan and rice, contained a whopping 1,810 calories; a portion of fish and chips approximately 900 calories and a doner kebab slightly more at 1,100.

Revealed: How many calories in YOUR favourite takeaway

A portion of fish and chips from a chip shop 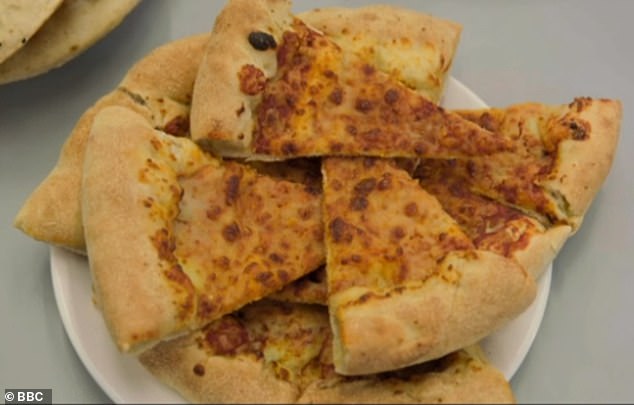 The Truth About Takeaways shocked audiences at home when explaining that a large Domino’s stuffed crust pizza (above) contained nearly 2,000 calories and 80g fat 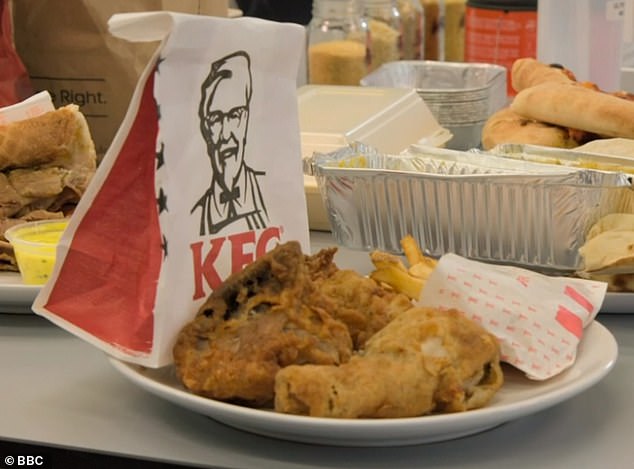 To the surprise of Twitter users, a KFC snack box – which contains a piece of chicken and fries – has is just 475 calories and 20g fat

The calorie counting proved to be too much for viewers, who declared they’d ‘never eat takeaways again’.

One person wrote: ‘About five minutes into that Truth About Takeaways programme and I already never want to eat a takeaway again.

‘Like imagine eating a whole Domino’s pizza and being two calories off your recommended daily dose? Not for me.’

Another said: ‘The Truth about Takeaways is actually shocking. I rarely eat takeaway but now I don’t ever want to order one again.’

A third added: ‘Currently mortified that my standard takeaway order of a korma with rice and naan averages at 1,800 kcals.’

‘When KFC comes out as the healthiest takeaway to eat,’ said another social media user alongside an image of a grinning person. 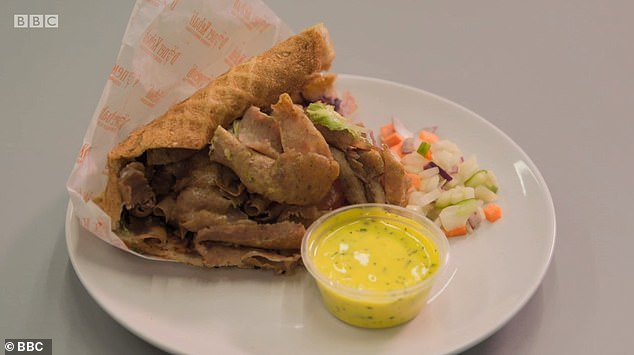 A doner kebab from a British High Street takeaway, above, contained 60g fat and 1,110 calories 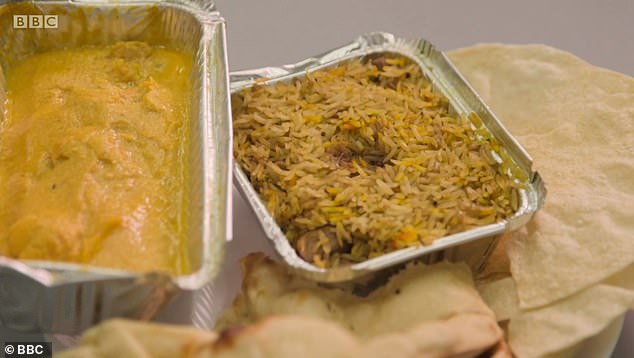 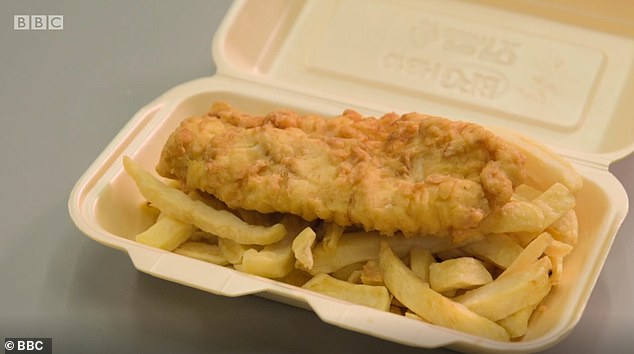 A portion of fish and chips from a chip shop, pictured, contains 45g fat and 927 calories

Presenter and journalist Nikki Fox admitted on the show that the revelations had ‘changed her whole way of life’.

‘The three piece fried chicken meal is coming up trumps,’ she explained after discovering it also contained the least amount of sugar and fat.

HOW MANY CALORIES DO I NEED EACH DAY?

The basic amount of calories an average adult needs per day is 2,000kcal for women or 2,500kcal for men.

This is based on the amount of energy the body needs to carry out basic functions and to walk and work throughout the day.

People who exercise a lot need to eat more calories to fuel their efforts, and young people and children burn more energy, too.

If you eat more calories than you burn in a day, you will get fatter.

Eating fewer calories than you burn will make you lose weight.

Foods which are processed and have high levels of carbohydrate, sugar and salt have higher calorie numbers than fresh fruit and vegetables.

Nikki spoke with University of Reading Professor Gunter Kuhnle, an expert in nutritional science, to discover which takeaways are ‘really bad for us and which we can get away with’.

After freeze-drying six meals – a large Domino’s stuffed crust pizza, a KFC snack box (containing mini fillets and chips), a chicken korma, naan and rice, a portion of fish and chips, Big Mac and fries and a doner kebab – he then discovered how much fat, sugar and calories they contained.

A recommended daily intake for an adult is 6g for salt and 70g for fat. Men should have no more than 2,500 calories a day, while women should stick to 2,000.

The chicken had just 1g of sugar, the burger contained 2.75g, the fish and korma carried 4g, the kebab held 4.5g, and the pizza contained the most at 9g.

When it came to the amount of fat found in each dish, the fried chicken came out on top again with 20g. Next was the burger with 39g, followed by the fish and chips, which contained 45g.

The kebab held 60g, and the pizza contained a whopping 80g, while the korma was the worst offender with 83g.

One meal should contain no more than 600 calories, according to the programme, and it was only the fried chicken that came in at below this level.

Speaking about the results, Nikki said: ‘So that pizza is our recommended daily intake of calories, salt and fat. 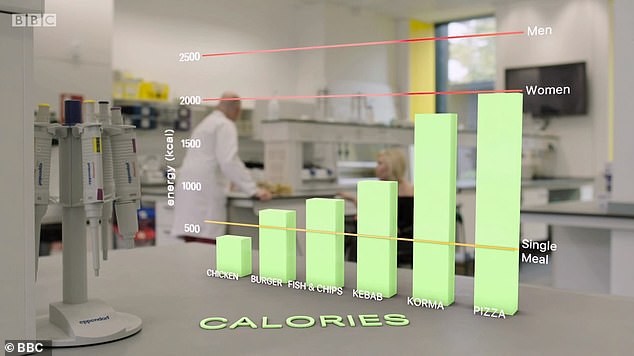 The Truth About Takeaways looked at which takeaways are ‘really bad for us and which we can get away with’. Pictured: A table showing the calories found in each dish 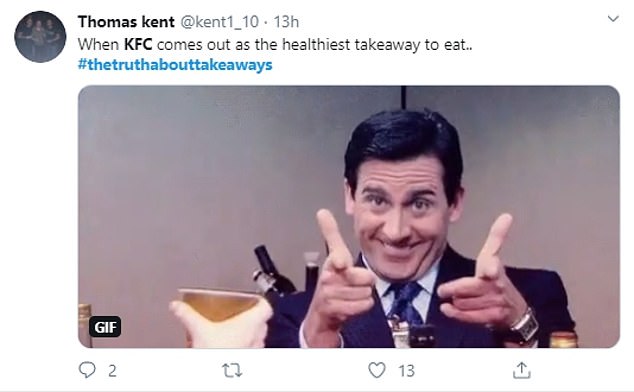 ‘If you’re going to have that, that pizza is all you can have in a day. People polish off a pizza like that in one sitting. I’ve done it, and I’m tiny.’

However, not everyone was impressed by the findings, as they suggested they were obvious and a ‘waste of time’.

One person wrote: ‘The Truth about Takeaways on BBC is hilarious. Comparing a whole pizza to one Big Mac and saying the pizza has more fat and calories. Waste of time, I could’ve told you that for free.’ 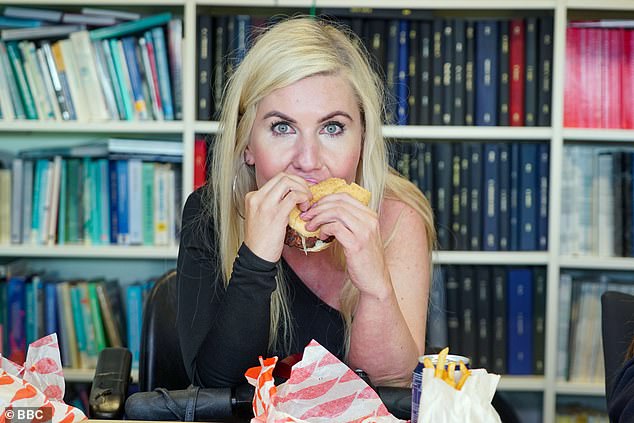