Facebook has banned the sharing or viewing of our news articles on its platform. For independent journalism straight from the source, download our app and sign up to our newsletters.

Business Council of Australia chief executive Jennifer Westacott says the Australian government needs to urgently boost its diplomatic and foreign aid footprint across the Indo-Pacific region to keep up with China’s growing influence and avoid becoming a second-order economy.

Ms Westacott has warned developing countries in the region are increasingly turning to Beijing’s controversial Belt and Road Initiative to finance infrastructure projects, which should be a “wake-up call” for Australia. 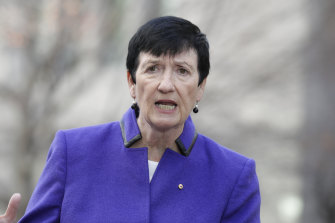 In a speech to the Department of Foreign Affairs and Trade on Thursday, Ms Westacott said a memorandum of understanding between a Chinese company and the Papua New Guinea government to build a $132 million fishery park on the island of Daru “even if speculative – should be a wake-up call”.

The Morrison government has been facing criticism from Labor and national security experts for not stepping in soon enough to stop the proposed facility on Australia’s doorstep.

“It is a warning shot that we need to urgently resource and scale up our diplomatic leadership and development assistance across the Indo-Pacific,” she said.

“And to do so in a way that plays to our strengths: on governance, sustainability, and transparency.”

It is the strongest ever call from Australia’s chief business lobby group to boost foreign aid spending. When the Abbott government was cutting aid in 2014, the BCA said Australia’s aid program needed to be “aligned with the government’s commitment to fiscal restraint in the current budget context”.

Since 2017 the Australian government has moved to fund more infrastructure in the region – including through the Pacific “step-up” – amid China’s growing influence through its BRI program.

Ms Westacott said Australia needed to remember that “our success is linked to the economic fortunes of our neighbours and the contribution we have made to shape those outcomes”.

“Our less developed neighbours – desperate for infrastructure – are increasingly turning to alternative financing like China’s Belt and Road initiative,” she said.

“If we cannot work out how to be competitive in those markets, then we run the risk of becoming a second-order economy.

“So, we need to maintain our traditional strengths – continuing to be good in the areas where we already excel such as mining and agriculture.

“Remembering that we have been so successful because companies in these sectors have adopted new technologies and increased their productivity.

“Our challenge is to lift our competitiveness across the economy – removing impediments so business can continue to build on our success in these areas while at the same time creating new and lucrative industries.”

Ms Westacott said Australia also needed to look at whether it was extracting the best value out of its free trade agreements with Japan, South Korea and China.

“How do we compare with similar countries with similar agreements – are they doing better? We can learn from them,” she said.

“Let’s also examine whether our foreign investment screening system makes sense to investors who are essential to finance major projects.

“What more can we do to get a common set of rules while managing for national security risks?

“And how can we enhance the agreements to facilitate the transfer of skills and talent to Australia, to support local jobs and drive the industries we want to develop?”

The Morrison government has been moving to boost the nation’s ability to produce its own supplies of critical health sector products, technologies and defence capabilities after the COVID-19 pandemic exposed supply chain gaps.

Ms Westacott it was “perfectly legitimate” to have a conversation about national sovereignty but the simple reality is that Australia is going to be highly dependent on complex global supply chains, exports and foreign capital”.

She said the nation needed to embrace “openness and free and fair trade, not protectionism”.