Skip to content
HomeLifestyle‘Wanting to prove something’: Snubbed Swifts to face Diamonds coach in Perth

Snubbed Diamonds Maddy Proud and Paige Hadley will soon have the chance to show off their on-court ability to Stacey Marinkovich after the NSW Swifts were named to face the national team coach’s West Coast Fever in week two of Super Netball.

Hadley and Proud received no court time across any of the four recent Constellation Cup matches despite undergoing two weeks of quarantine in New Zealand. 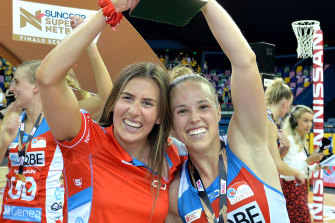 Hadley and Proud were snubbed from receiving any court time across all four Constellation Cup matches despite undergoing two weeks of quarantine in New Zealand. Credit:Getty

“If it also means that Stacey gets to see us perform in that environment, that’s great as well.”

Eighteen players were taken to New Zealand but Marinkovich remained eager to develop a specific 12-player side.

Even players named in the 12, such as former Diamonds captain Caitlin Bassett, struggled to get on-court as players continued to be left on for the full 60 minutes.

Proud said she was “disappointed” Hadley also missed out on game time.

“It just proves how competitive that top level is at the moment and the depth that we do have in that Australian squad to see players that are at the top of their teams in the domestic league not being able to get out there,” she said.

“It’s always tough when your team’s losing and you always want to be able to contribute in some way … anyone that plays at this level always envisions they would love to be out on the court.”

Proud and Hadley will now lead the Swifts, champions in 2019, in an effort to wrest the Super Netball title back from the Melbourne Vixens.

After spending three months in a Queensland bubble last year, the Swifts will again head back to the Sunshine State for their May 2 season opener against the Firebirds. The clash will be the first time Swifts coach Briony Akle faces former Swifts teammate Megan Anderson as a rival coach.

The Swifts’ first game at their new home, Sydney Olympic Park’s Ken Rosewall Arena, will come in round three.

Most Viewed in Sport