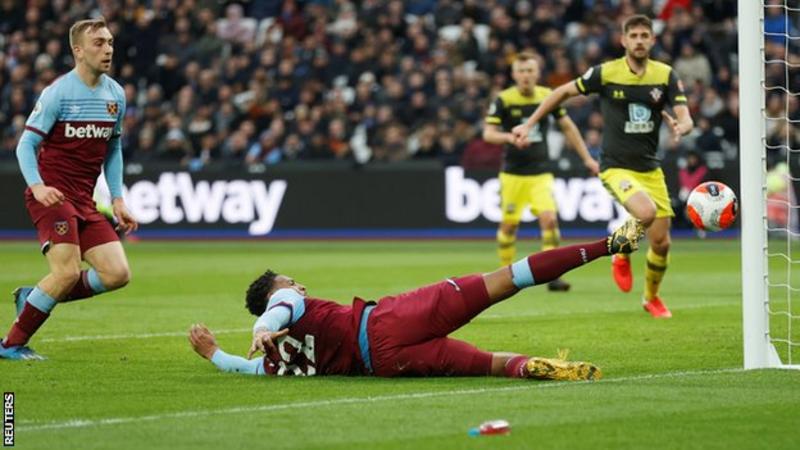 West Ham’s first Premier League win in two months was enough to take them out of the relegation zone as £20m Jarrod Bowen marked his full debut with a goal against Southampton.

Sebastian Haller and Michail Antonio were also on target at the London Stadium after teenage forward Michael Obafemi had levelled Bowen’s opener for the Saints.

The excellent Antonio might have had another for the hosts after he had been sent free by an audacious rabona from Haller but goalkeeper Alex McCarthy made the save.

Unlike their last home game against Brighton, when they squandered a 3-1 lead, this time the Hammers eased home, moving above Aston Villa with a much-needed victory after a run of two points from their last seven games.

The result was also positive for co-chairman David Sullivan and David Gold given the protest against them that took place before the game by thousands of Hammers fans, angry at the way the club is being run.

A lot of haggling took place before Bowen’s January transfer deadline-day move from Hull finally went through. The striker even had his medical in Yorkshire just in case the deal was not completed and he was required for duty in the Championship the following day.

It has taken a bit of time for Bowen to get his chance but, finally given a start by manager David Moyes, the 23-year-old showed why he has scored 39 goals in the last season-and-a-half.

Even from a wide position on the right, Bowen was a threat and had a good chance blocked before opening his Hammers account after 15 minutes, running on to an excellent pass from Pablo Fornals before supplying the neat finish.

“I think that’s the way it went in my dreams last night,” said Bowen.

“The assistant manager said the keeper liked to go down quickly. I knew the angle was tight so I got enough on it to dink it over him.

“I thought it might be offside – I joked with my dad last night about what if I scored and it was ruled out.”

Such is the general feeling of discontent around the London Stadium at the moment that Southampton’s equaliser could easily have been a body blow from which the hosts could not recover.

To that end, their were indebted to McCarthy, who gifted the hosts their second by getting his positioning all wrong to challenge for a routine up and under by Antonio.

Haller out-jumped McCarthy to get his head on the ball and then reacted quickly to squeeze the ball home from a tight angle.

A lofted Fornals pass sent Antonio through for the Hammers’ third and while they have given away 22 points from winning positions this season, most recently at Liverpool on Monday, this time they completed the job.

That was particularly welcome for Bowen, who had lost all nine previous Premier League games he had been involved in.

It is three months now since the end of Southampton’s own desperate run of two points from nine games, including that calamitous 9-0 home defeat by Leicester.

Such is their improvement that two more wins will probably be enough to keep the Saints safe.

However, three defeats in their last four games is a concern and, even though the absence of top scorer Danny Ings was a factor, Moyes seemed to have worked out letting the visitors have the ball was important in reducing Southampton’s attacking threat. Southampton’s defeat came despite them having 66% possession.

As if to emphasise the point, Southampton’s goal was essentially a counter-attack after a West Ham raid had broken down.

James Ward-Prowse was afforded too much time to cross and Obafemi swept home.

It was only the Dubliners’ second Premier League goal but the manner of the finish, lifted over a despairing Fabianski, suggests there will be a few more before the campaign reaches its conclusion.

Ings was introduced midway through the second-half in the hope of sparking a comeback but failed to threaten. 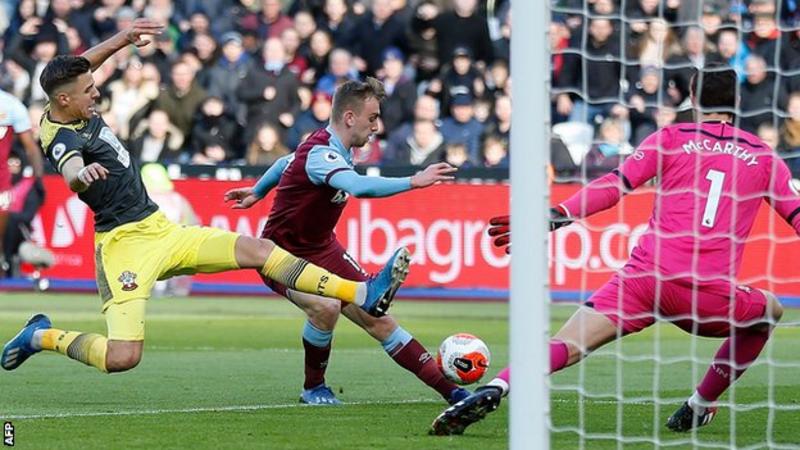 West Ham’s next game is a London derby at Arsenal on Saturday, 7 March (15:00 GMT). Southampton play Newcastle at St Mary’s Stadium on the same day, also at 15:00.

Shane Long (Southampton) wins a free kick in the attacking half.

Attempt blocked. Danny Ings (Southampton) right footed shot from the right side of the box is blocked. Assisted by James Ward-Prowse.

Sébastien Haller (West Ham United) wins a free kick in the attacking half.

Attempt missed. Stuart Armstrong (Southampton) right footed shot from outside the box is high and wide to the right following a corner.

Attempt blocked. Pierre-Emile Højbjerg (Southampton) header from the centre of the box is blocked. Assisted by Ryan Bertrand.

James Ward-Prowse (Southampton) wins a free kick in the defensive half.

Attempt missed. Jarrod Bowen (West Ham United) left footed shot from outside the box is high and wide to the left following a fast break.

Attempt missed. Angelo Ogbonna (West Ham United) left footed shot from the centre of the box misses to the left. Assisted by Jarrod Bowen with a cross following a corner.

Sébastien Haller (West Ham United) wins a free kick in the attacking half.

Attempt saved. Ryan Bertrand (Southampton) left footed shot from outside the box is saved in the bottom right corner.

Attempt missed. Sébastien Haller (West Ham United) header from the centre of the box misses to the right.