The International Olympic Committee and FINA should be sending the Court of Arbitration for Sport a heartfelt thanks after its ruling on Chinese swimmer Sun Yang saved them a potential nightmare podium protest at the Tokyo Olympic Games.

On Friday night, CAS handed Sun a ban of eight years for his part in tampering with a doping sample that was collected in an out-of-competition test in September of 2018. Previously, FINA had let Sun continue to swim after reviewing the incident, in which a vial of blood was smashed with a hammer. 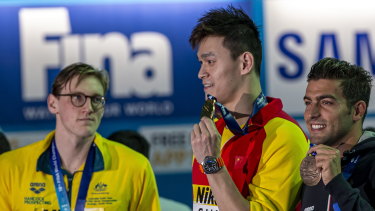 Mack Horton refused to stand on a podium with Sun Yang at the world championships and may have done the same in Tokyo.Credit:AAP

As both have since said, the gestures were not meant to be seen as personal attacks on Sun, although he has always been a divisive presence given his unpredictable antics and history of anti-doping issues.

The protest was aimed at FINA’s inability to get a handle on doping within the sport, perceived favourable treatment for one of their star athletes and cash cows, and the inescapable belief that there was one rule for Sun and another for everybody else in the sport.

FINA was quick to sanction Horton and Scott – as well as Sun, – and hastily added an article to its code of conduct that ensured any future swimmers making similar protests wopuld do so with the risk of a heavy sanction, with one option being the stripping of medals.

The IOC was paying attention. In January, the body issued fresh guidelines for the 2020 Tokyo Games that banned athletes from political, religious and ethnic demonstrations. That included taking a knee during anthems and failing to respect fellow medal winners, something many believed was aimed directly at Horton and Scott. 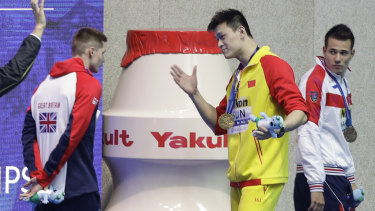 But what if Sun had been allowed to compete in Tokyo? And what if Horton and Scott were once again asked to share a podium with the most controversial athlete in the history of the sport?

The questions then would become what price an Olympic medal? Athletes spend four years working tirelessly towards their goals and for those like Horton, already an Olympic champion and a strong chance to win again, the stakes are even higher.

Risking a world championship medal is one thing. Having the possibility of being stripped of an Olympic medal is another entirely. But those who know Horton best believe his convictions around clean sport are so strong that he may well have made the ultimate sporting sacrifice if it meant taking his message to the grandest of stages.

That scenario would have been a disaster entirely of FINA's own making, after they were left scrambling to save face at the world championships. The IOC, too, has been accused of being holier than thou on the matter of athlete expression and would have found themselves searching for a suitable punishment.

That's not to say there won't be expressions of discontent from athletes in Tokyo, regardless of the new rules put in place. The crackdown may even spur some on to push the envelope and find out whether the IOC means business as it tries to protect its image in an era where the Olympics have lost part of their shine.

But by ensuring a lightning rod like Sun Yang won't be there to fan the already glowing embers of discontent among swimmers, CAS and WADA have given FINA and the IOC a welcome reprieve from a moment of revolt that would have sent shockwaves around the world.

You would be a brave person to bet against Horton having the courage to maintain the rage at an Olympic Games, no matter the consequences.