One of Australia's top gold medal chances will undertake three different training camps in Japan before the Olympics as the country's sports minister raised the prospect of the Games being postponed until later this year because of coronavirus.

Rio sailing silver medallist Lisa Darmanin said she and cousin Jason Waterhouse were so determined to go one better in Tokyo they would make multiple trips to Enoshima despite the global threat. 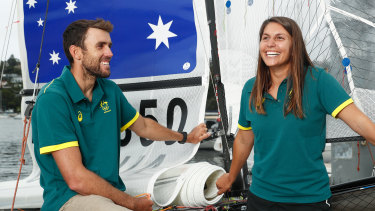 The pair were this week given the nod for Australia's controversial Nacra 17 position on the sailing team, edging out former gold medal winner Nathan Outteridge and sister Haylee.

Darmanin and Waterhouse admitted they didn't spend enough time at the Rio venue before the 2016 event and don't want to make the same mistake in Tokyo, even in the face of growing concerns over the virus spread.

"We've prioritised time in Japan over the last couple of years," Darmanin said. "We've got a few 10-day blocks and we'll be there in May, then again in June and July.

"There's nothing really we can do about [coronavirus] but we can listen to the experts that say it's OK and everything is under control. The International Olympic Committee is working with the World Health Organisation and we'll take their guidance.

There's nothing really we can do about [coronavirus], but we can listen to the experts that say it's OK and everything is under control

"In terms of our preparation it doesn't change and we're very diligent with our health."

Darmanin and Waterhouse finished third in the recent world championships – one spot behind the Outteridges – and are considered one of the leading hopes of Australia taking home gold in Japan.

Olympics minister Seiko Hashimoto told Japanese parliament there was the option of the Games being postponed until the coronavirus spread is slowed.

"The IOC [International Olympic Committee] has the right to cancel the games only if they are not held during 2020," Hashimoto told Japanese parliament. "This can be interpreted to mean the games can be postponed as long as they are held during the calendar year."

But the IOC quickly assured the Games were still planning to proceed on July 24 despite the virus spread being blamed for several deaths in Japan, the closure of most schools and cancellation of Olympic test events.

"I would like to encourage all the athletes to continue their preparations with great confidence and full steam," IOC president Thomas Bach said.

More than 93,000 coronavirus cases have been confirmed around the world and there have been 3203 deaths.

The Australian Olympic Committee has built a matrix to keep track of all its Olympic-bound athletes in the build-up to Tokyo as international travel becomes increasingly difficult.

The Australian Institute of Sport's European base in northern Italy was ordered to shut by local authorities as coronavirus swept through parts of the country.

Some of Australia's sailors have prioritised time on the water in Japan to familiarise themselves with the changing conditions, a point which Darmanin insisted could prove decisive.

"We had worked really hard to get a medal [in Rio], but it wasn't what we came for," she said. "And missing out by one point is pretty brutal to be honest.

"We know we've got it in us to win a gold medal and we're much better prepared than we were last Olympics. We feel like leading to Tokyo we're in a good position."