Skip to content
HomeLifestyleWill Scott Morrison even care when he is censured?

The most interesting question that comes to mind when considering the coming parliamentary censure of former prime minister Scott Morrison is simple: will he care?

The irony is sharp. We don’t know precisely the wording of a censure motion, but the reasons for it are already clear enough. The essence, easily lost among discussions of so many ministries, is simple: the most powerful person in the land made himself even more powerful and kept it secret. The cabinet did not know, voters did not know, and the parliament – which represents voters – did not know. He was quite literally unaccountable. 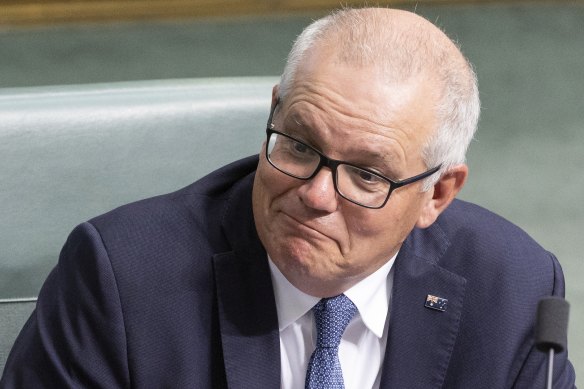 Such actions are profoundly undemocratic. And a censure is serious business. It carries no penalty – still, for most MPs, it would be sad humiliation, a blot not easily forgotten. But for Morrison? It is hard to tell. This is the irony: his punishment is to be condemned by a body for which, he has made clear, he has little respect. That lack of respect is, in fact, what he is being condemned for.

Morrison’s attitude – either the chance that he is hurt or the greater chance he does not care at all – will not stop Labor, which will be joined by others in the vote. Since the May election, Anthony Albanese has kept the drumbeat against Morrison going, not willing to let his failures fade easily into the past. Of course, the prime minister understands there is a political advantage in this.

But one senses, in Albanese’s dogged attacks on Morrison’s multiple ministries, a more personal feeling as well. An important fact always to keep in mind about Albanese is that – a former Leader of the House – he sees himself as a parliamentarian, someone who understands and values the rules of parliament more than almost anyone else. For Albanese, one suspects, the very fact that Morrison does not take parliament seriously is precisely why parliament should be the body to censure him: as a reassertion of its primacy, a refusal to allow it to be diminished.

Diminishing the parliament is what Morrison did, not only in this affair but more broadly. It was not so much a major aim as an inevitable consequence of his general approach.

That approach is marked by contempt for the idea that he should be accountable. He has never had any time for the idea that politicians should answer questions from the press. Laurie Oakes once described his approach as “disgusting”.

Morrison has a habit of denying having said things he has unquestionably said. When the Audit Office unearthed the sports rorts debacle, its funding was cut. Important inquiries were curtailed, kept secret, or run by his former chief of staff (or all three). As prime minister, his approach to parliament was sloppy at best – he managed to mislead the House twice, correcting himself afterwards, and on two other occasions gave answers to the House that some argued were also misleading.

This is the subtext of the matter: if Morrison had usually taken a different approach to accountability, perhaps his actions in the midst of a pandemic would be read differently, as sincere rather than controlling. But then a man with more respect for accountability would not have acted like this.

Morrison’s poor attitude to good process was tied to a broader arrogance in his approach. He did not need to be accountable because he was always the person most likely to be right. It was not that he thought he was the smartest person in the room; it was simply that he was the person most likely to arrive at the right decision once you had taken into account the politics, which was so often the most important category to be right about. Why would he brook questioning from people incapable of understanding the world the way he did?

Add to this a deep, deep desire to avoid ever being blamed for anything and you can see how accountability becomes a problem.

The Liberals, who look set to vote against the censure, will hope Albanese looks unnecessarily punitive, malicious in pursuit of a wounded opponent. In fact, Albanese’s call to go forward with the censure was the only logical response to the report into the affair, handed down on Friday. The former High Court judge Virginia Bell agreed with the solicitor-general that Morrison “fundamentally undermined” the principles of responsible government. She concluded the secrecy was “apt to undermine public confidence in government” and that, when the appointments did come out, the secrecy that had surrounded them “was corrosive of trust in government”.

Having called the inquiry, if Albanese had not acted on such serious findings he himself would have looked unserious, as though the whole exercise had been rhetorical. In other words, it would have felt a little too much like the way Morrison often behaved: treating the processes a government has at its disposal as props in a political pantomime.

The ultimate weight of the censure will depend, oddly enough, on Albanese’s own record. If, with time, the Albanese government becomes high-handed and hypocritical when it comes to standards, then Labor’s decision to proceed with a censure will look, in hindsight, base and cynical. If, on the other hand, it remains a serious government, one that allows itself to be held accountable and treats good process as an end in itself, then the censure will stick.

If that is the case, then the way Morrison feels about the censure may change over time. This week he may not care. He is likely to dismiss the vote as petty and political, with no more meaning than that. But if, over time, the approach of Albanese’s government cements the current perceptions of Morrison’s, then the censure will increase in stature, coming to seem like the final, damning word on a leader who never seemed to care about the institutions that make governing possible.

Then, and only then, might Morrison finally come to understand something he has never previously grasped: the immense power and importance of the parliament.

Sean Kelly is author of The Game: A Portrait of Scott Morrison, a regular columnist and a former adviser to prime ministers Julia Gillard and Kevin Rudd. Connect via Twitter.

More from our award-winning columnists

An anxious nation: Mortgage stress, COVID burnout, extreme weather and the cost of living crisis – no wonder Australia’s status as the “lifestyle superpower of the world” is under threat – Nick Bryant

The future of democracy: Australia must learn from America’s descent into extreme inequality, which has led to deep discontent. It must also do more to civilise “social” media – the great amplifier of hate – Peter Hartcher

Behind the interview: Shane Warne may have been the greatest bowler legendary interviewer and cricket lover Michael Parkinson has ever seen, but he’s not his favourite interview – Peter FitzSimons