Woman who couldn’t have children insists she loves her DOG like a daughter, quit her job to be a ‘stay at home mother’ and says her ‘child’ should be accepted in all public places like families are

A woman who is unable to have children has said her trusted dog is like a substitute daughter to her, and believes she should be given the same privileges as a child.

Kate Taylor, 42, from Calne, Wiltshire, adopted her cross-breed Poppy, now 13, when she was only ten weeks old while struggling to conceive with her husband, Rob, and says she dotes on her pet the way she would a child.

She working from home, and cannot bear to be away from her pooch more than three hours at a time. She is pushing for dogs to be accepted in all public spaces the way children are.

Speaking to FEMAIL , Kate explained that ‘perceptive’ Poppy saw her through moments in her life where she could not see ‘the light at the end of the tunnel,’ and helped her carry on.

‘Why should being a mum mean you have to give birth?,’ she said. ‘I’ve come to realise that being biologically related to someone is the least of what makes you a mother. Motherhood is so much more than that. It’s about loving someone unconditionally, nurturing and caring for them. Putting their needs before your own.

‘The void childlessness has in my life has been very much filled by my dog Poppy, who I treat and love like any mum would their daughter.’ 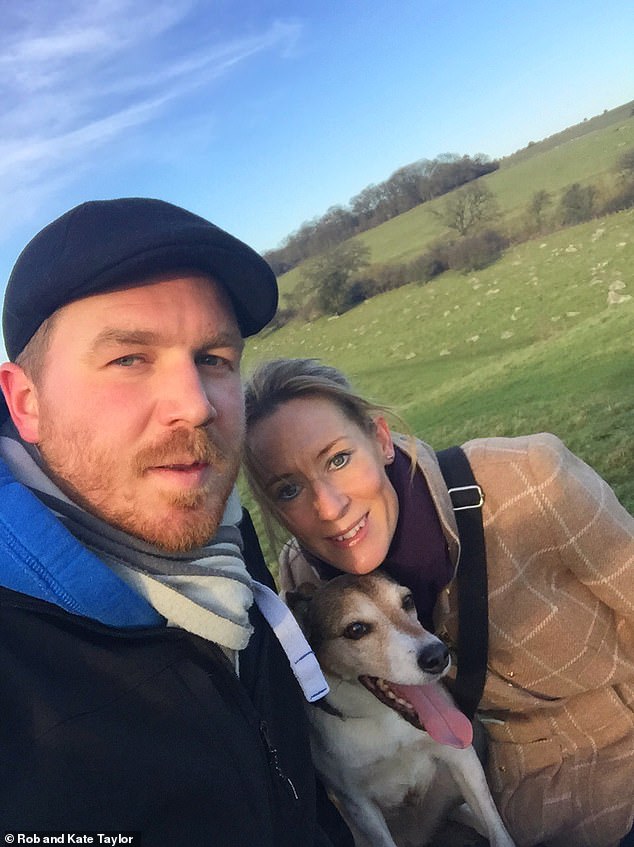 Kate Taylor, 42, from Calne, Wiltshire, adopted her cross-breed Poppy, 13, when she was only ten weeks old while struggling to conceive with her husband, Rob, and says she dotes on the pup the way she would a child 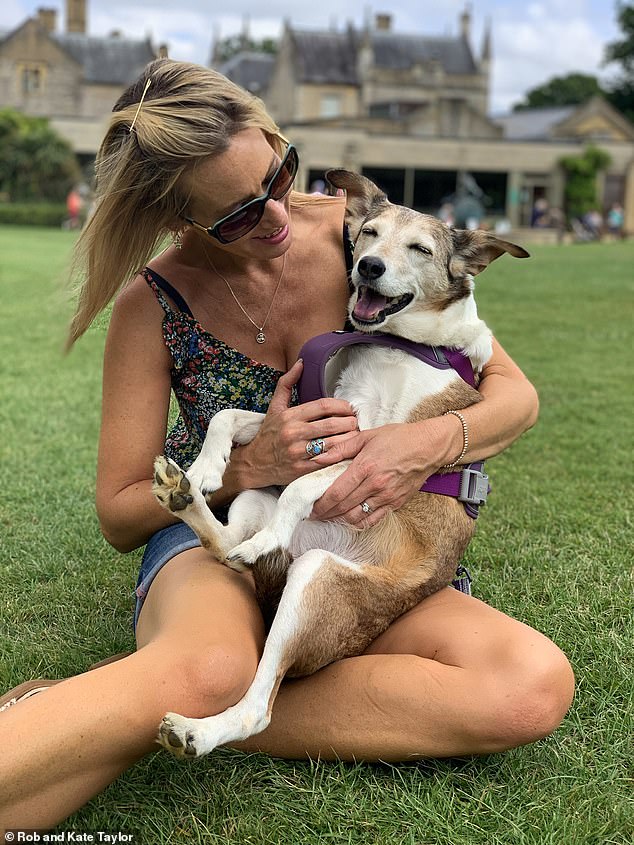 Mother and daughter:  Kate was left feeling like she did not belong in society because she could not conceive after three failed rounds of IVF, but she then realised Poppy was the only child she needed

‘The love and devotion that I feel towards her could not be stronger, and I know many people feel that same bond towards their canine companion.’

Kate – who runs the pet directory dotty4paws.co.uk -recalled how she and her husband Rob went through three rounds of unsuccessful IVF, putting strain on their wellbeing.

Admitting that not being able to be a mother gave her a sense that she did not belong in society, she quickly found that the unconditional love she gave Poppy filled the void.

And Kate admitted that leaving Poppy is unbearable, because the pup suffers from separation anxiety.

‘I hate leaving her. If I do, I make it as brief as possible,’ she says.

The blogger, who sometimes refers to the dog as her ‘furbaby’, says she can never be out for the whole day, and cannot leave the house for more than three hours. 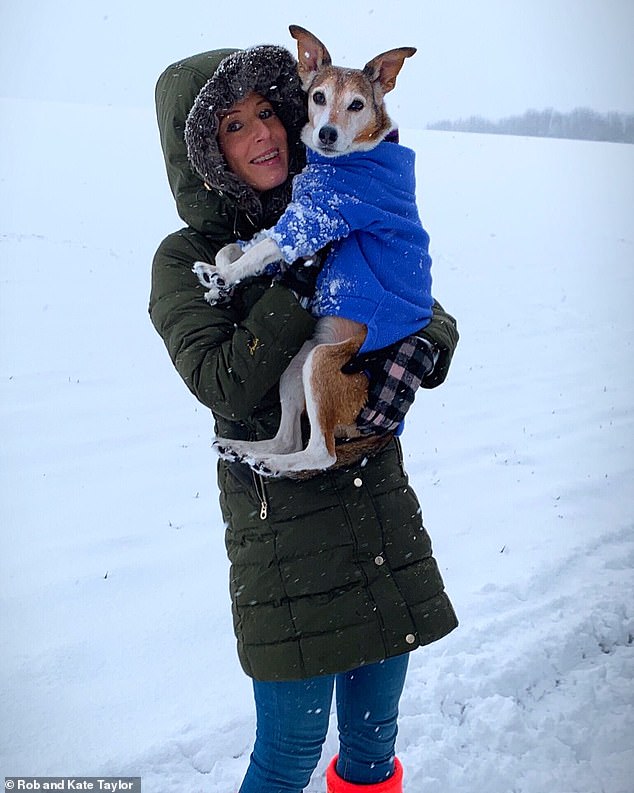 Kate says that leaving Poppy is unbearable, because the pup suffers from separation anxiety (pictured on a snowy day away)

But she argued: ‘You wouldn’t think of leaving a child alone while you’re out.’

She also explained that she cannot understand that ‘misbehaving’ children are allowed to sit in pubs while dogs are kept out.

‘We’ll go out to the pub and on the side you have a dog quietly sitting under the table, you wouldn’t know she’s there, and across, you’d have two kids creating mayhem,’ she said. 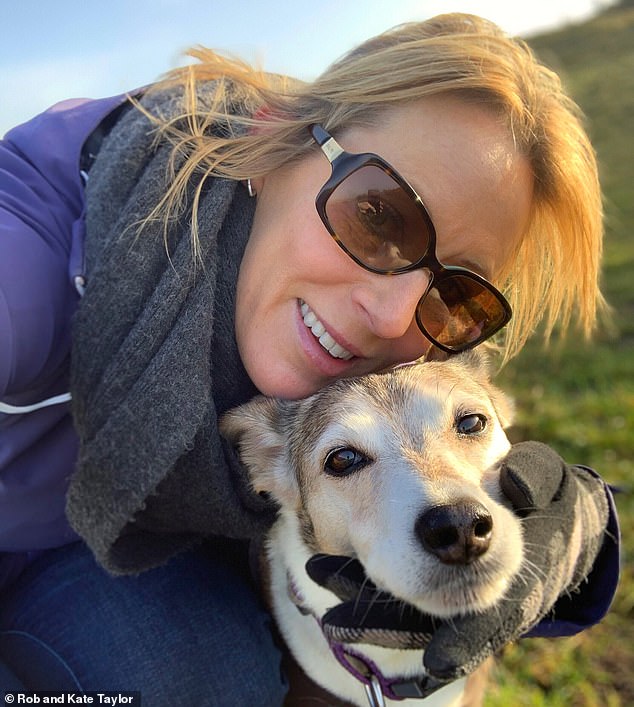 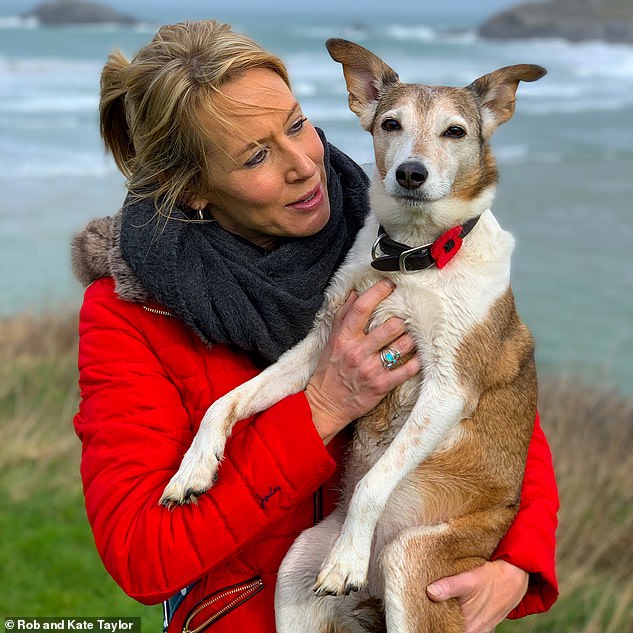 Kate explains she does not believe being a mother ends at blood ties, and says she loves Poppy as much as she would her child (pictured together during a day trip)

‘Why is it they are allowed to be there, to be accepted anywhere,’ she asked.

She went on to argue that children can be as ‘difficult’ as dogs, and a child is as likely to misbehave as a dog is to ‘bark and bark.’

She added that whether it comes to dogs or children, ‘you know your offspring well enough to know how they’ll behave.’

Kate would even love to be able to pay a fee so Poppy could be by her side on a night out. 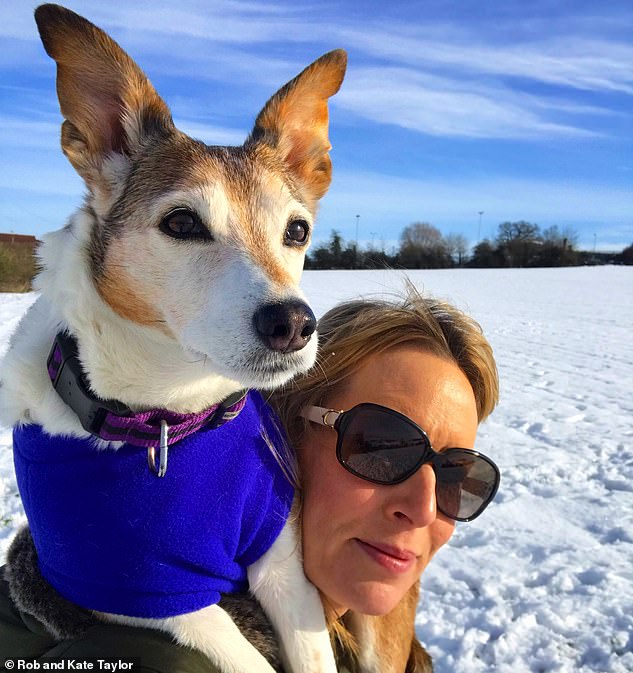 Kate says that children can be as ‘difficult’ as dogs, and a child was as likely to misbehave as a dog was to ‘bark and bark’ (pictured in the snow with Poppy) 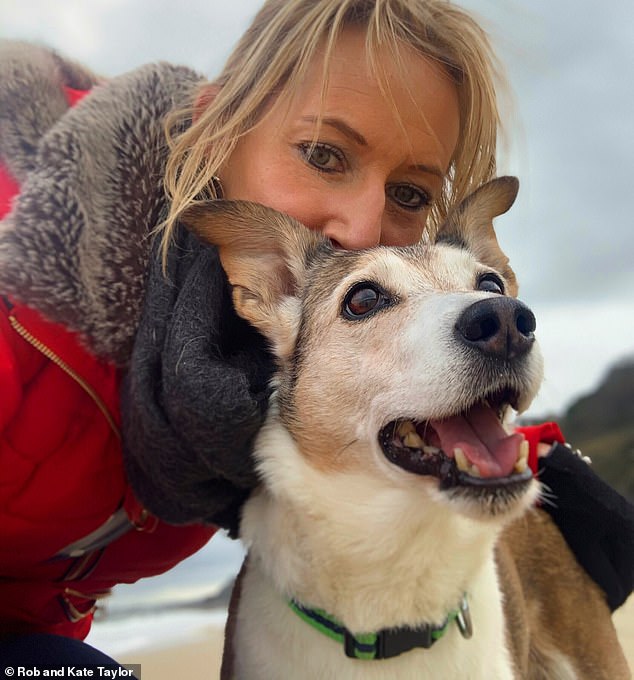 While Rob loves Poppy, he doesn’t share the strong bond Katie shares with her, and so both ‘daughter’ and ‘mother’ will take ‘girls trips’ for a day, sitting at dog-friendly cafes and pubs (pictured together by the beach on a day away)

But she would never think of taking a plane with Poppy, because her beloved pet would have to stay with the luggage. For this reason, the Taylors and their dog keep their vacations local, and do not leave the UK.

While Rob loves Poppy, he doesn’t share the strong bond Katie shares with her, and so both ‘mother and daughter’ take ‘girls’ trips’ for a day, sitting at dog-friendly cafes and pubs.

‘Being a parent is not all about being blood related, some natural parents can be shoddy parents who do not care about their children’s welfare,’ she argued, describing herself as a doting mother to Poppy. 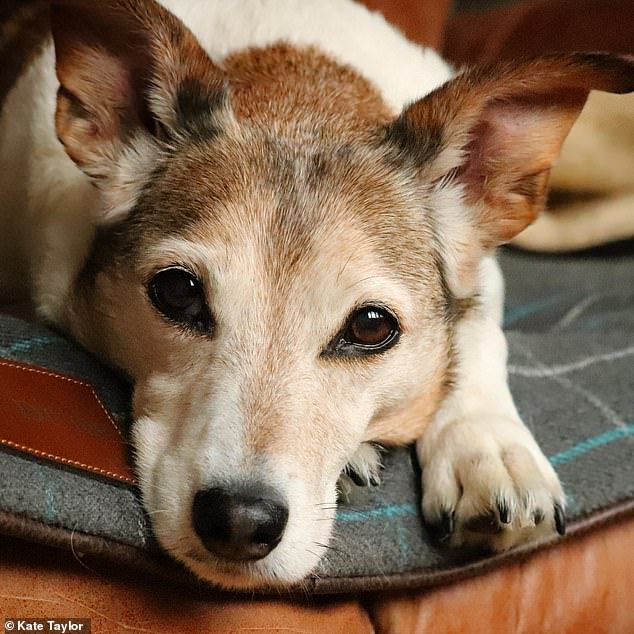 A close-up pictures of 13-year-old pup Poppy, whom Kate adopted when she was only ten-weeks old 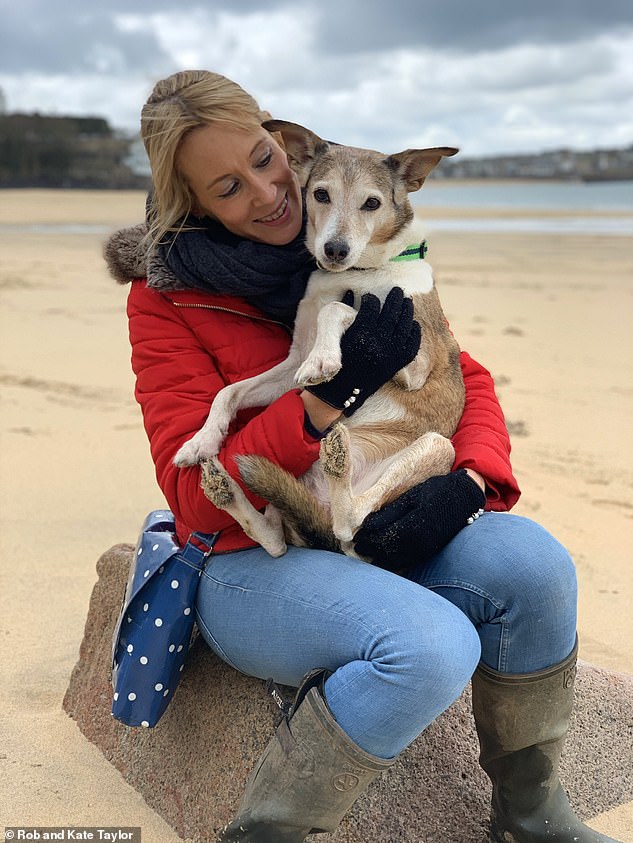 Kate quit her job as a teacher and ‘tailored’ her life to Poppy, working on her blogging from home in order to spend as much as possible with her pup (pictured together by the beach)

‘You adapt your life to what you’re able to have and to do,’ she said, adding she felt she needed to find someone or something to give the love she could not give a child.

But Kate is already worried about outliving Poppy, admitting: ‘I can’t even contemplate the thought of it’.

The couple have recently adopted a eleven-week old cross-breed puppy called Gertie – short for Gertrude – that they hope to model after their beloved pup in order to cope with the loss of Poppy.

But the arrival of a new pup in the family was a shock to Poppy, who is used to getting her way after being the couple’s sole dog for 13 years. 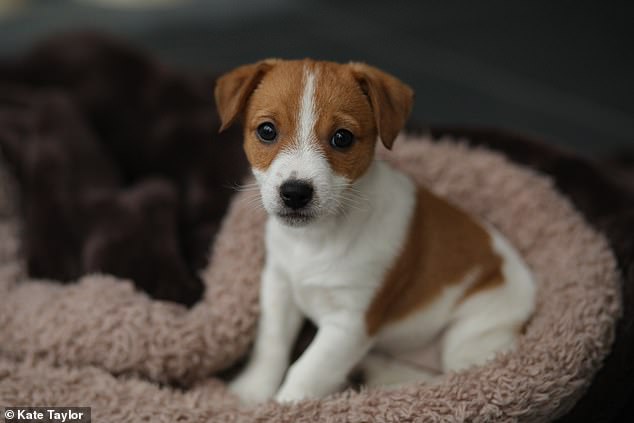 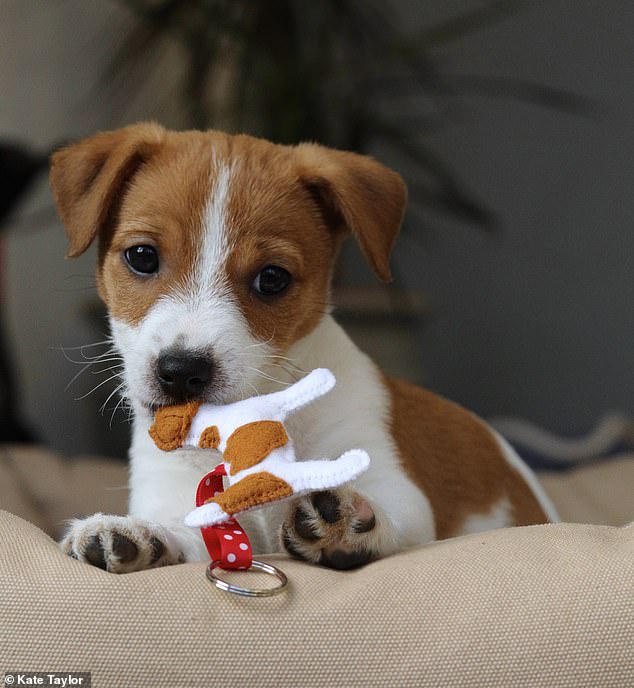 Kate also says that Poppy filled the gap she felt in her life after her failed IVF rounds, but admits that Poppy being 13, she cannot bear the thought of outliving her (pictured: Gertrude)