The modern horror master gave us Get Out and Us and has now produced and written a reboot of Candyman. The 1992 horror focused on a vengeful African-American ghost who was fed to bees by having honey smeared on his body in the 19th century for having an affair with a white woman. In the modern world, if you say his name five times in the mirror the hook-handed slasher appears and murders you.

Candyman had two sequels and has now been rebooted by Jordan Peele.

But the first trailer appears to tease that the new movie is actually a direct sequel to the original.

Yahya Abdul Mateen II stars as artist Anthony, who is drawn to Cabrini Green projects in Chicago, where the events of the first film took place.

Interestingly, Anthony is the name of the baby who survived the ending of Candyman. 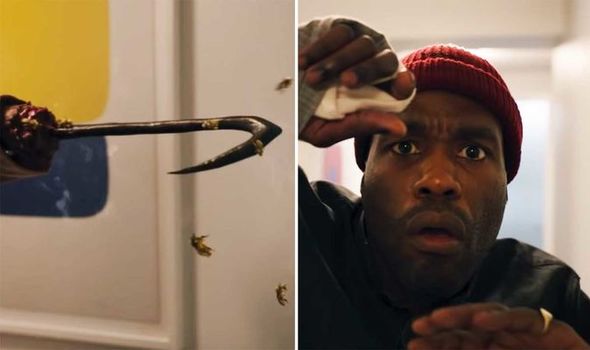 At the end of the original, the protagonist Helen saved baby Anthony from being burned alive by taking the fate herself.

But then she became a monster similar to Candyman himself and now it looks like Yahya’s adult Anthony is going through something similar in the reboot.

When he looks in the mirror he sees a hallucinatory reflection of the ghost, suggesting he’s living on and acting through the artist.

Candyman’s official synopsis reads: “For as long as residents can remember, the housing projects of Chicago’s Cabrini Green neighbourhood were terrorised by a word-of-mouth ghost story about a supernatural killer with a hook for a hand, easily summoned by those daring to repeat his name five times into a mirror.

“In present day, a decade after the last of the Cabrini towers were torn down, visual artist Anthony McCoy (Yahya Abdul-Mateen II) and his girlfriend, gallery director Brianna Cartwright (Teyonah Parris), move into a luxury loft condo in Cabrini, now gentrified beyond recognition and inhabited by upwardly mobile millennials.

“With Anthony’s painting career on the brink of stalling, a chance encounter with a Cabrini Green old-timer (Colman Domingo) exposes Anthony to the tragically horrific nature of the true story behind Candyman.

“Anxious to maintain his status in the Chicago art world, Anthony begins to explore these macabre details in his studio as fresh grist for paintings, unknowingly opening a door to a complex past that unravels his own sanity and unleashes a terrifyingly viral wave of violence that puts him on a collision course with destiny.”

Last year, Jordan Peele released Us and has since talked about a possible sequel.

Speaking with Polygon, the writer and director was asked if he would return to the Us-verse for another story.

The filmmaker replied: “Sure. It’s a fun one! There’s a lot going on there.

However, Us star Lupita was pretty adamant in not returning for a sequel when asked at the premiere.

She told Variety: “Please no, thank you.”

Lupita added: “Thank you, no no. I’m good. I’m retired from the tethered world, you know?”