After debuting to critical acclaim last summer, Central Park is returning for a second season. This time, the animated musical comedy series co-created and executive produced by Josh Gad has upped the ante as the Tillerman family continues to navigate living in and caring for the world’s most famous park.

ET has an exclusive sneak peek of season 2, which premieres with three episodes Friday, June 25 on Apple TV+. In the clip, the family is gathered around the table as Paige (Kathryn Hahn) recounts a hilariously horrible theme park mishap to her husband, Owen (Leslie Odom Jr.) and their two kids, Cole (Tituss Burgess) and Molly (Emmy Raver-Lampman).

The scene comes from episode three, “Fista Puffs Mets Out Justice,” which is also an early showcase for Raver-Lampman, who took over the character of Molly from Kristen Bell in between seasons.

“Emmy has brought something to this character that I think we certainly imagined would be there when she filled in. But I don’t think any of us expected the level of magic and brilliance that she’s brought to this role,” Gad tells ET’s Rachel Smith.

He adds that there’s a song Raver-Lampman performs in season 2 that is “one for the ages.”

“It is so good and brings a tear to everybody’s eyes who watches it. And I do think that only Emmy could have done that. And it is such a testament to her skill that she came in and just, from the get-go, ran with the challenge and met the moment,” he continues. 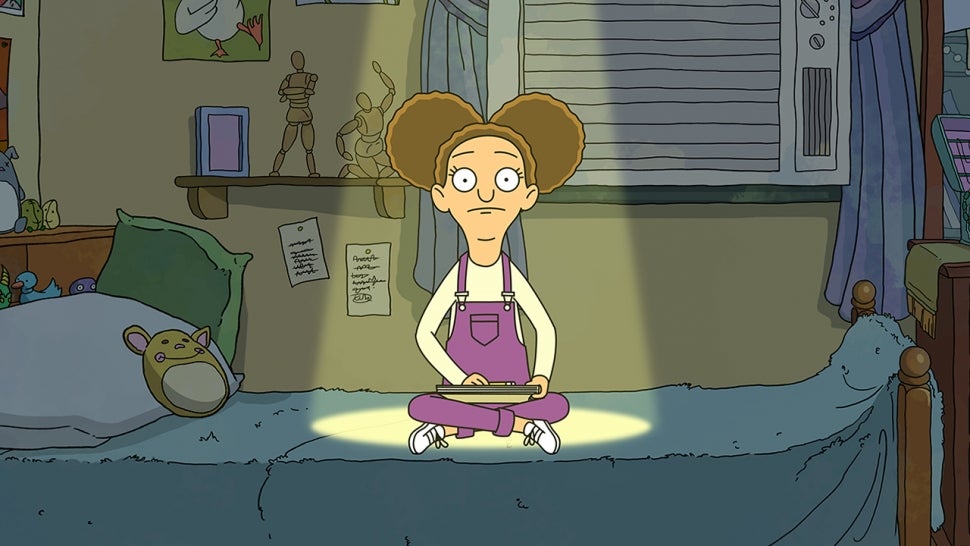 While Bell originated the role for the series, she stepped down last year after she and the creative team determined that “casting a mixed race character with a white actress undermines the specificity of the mixed race and Black American experience.”

“It was an absolutely easy decision to make and none more so than for Kristen Bell, who was the first person to raise her hand and say this is what needs to happen,” Gad explains. “And we all agreed.”

While recasting a role could easily present challenges, none of them were bigger than completing the series remotely during the pandemic.

“It was a challenge to meet the standard that we’ve set in season 1,” Gad says. “So being able to accomplish the level of creative ambition that we set out to do surpassed even our loftiest ambitions. I can humbly say that season 2 not only hits the mark, but I think does so with such ease and assuredness, and it’s a testament to our creators and to our incredible cast.”