Tech, media and entertainment companies all couldn’t escape the sea of red this week 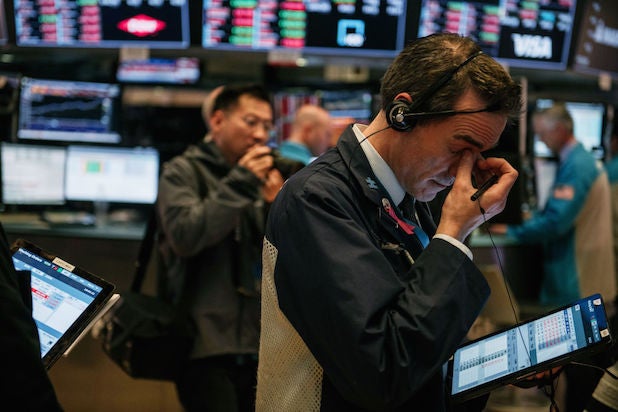 Wall Street’s worst week since the 2008 financial crisis didn’t let up on Friday, with fears over coronavirus rocking a number of entertainment and tech giants, including Disney and Apple, and spooking investors in the process.

The pain was felt across the board, with the three major indexes — the S&P 500, Dow and Nasdaq — all dropping at least 12% this week. On Friday, the S&P dipped 0.8% and the Dow fell 1.4%, while the Nasdaq made a late rally to turn slightly green for the day. For a quick look at how 15 major companies fared this week, check out the table below: 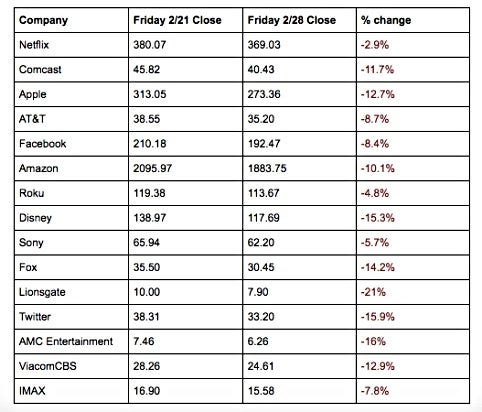 Disney was hit especially hard this week, between CEO Bob Iger stepping down and the impact coronavirus is anticipated to have on its business. On Thursday, Disneyland Tokyo was shut down for two weeks in response to coronavirus, and the company’s box office performance is also expected to suffer a severe blow as a result of less fans going to the theater in markets like China. Disney’s shares dropped another 0.4% on Friday, extending its losses to 15.3% this week.

Apple, meanwhile, has also been grappling with the fallout from coronavirus. The company’s share price in the last week has dropped nearly 13% since closing at about $313 per share last Friday; the company’s market cap has also dropped about $200 billion during that time to $1.17 trillion.

Things were much different only a few weeks ago, with Apple closing at its all-time high of $327.20 on Feb. 12. Since then, Apple has had to revise its Q2 revenue projection, with the company saying coronavirus had “temporarily constrained” iPhone production.

These two behemoths aren’t the only entertainment and tech companies that were knocked down this week, though. Even Netflix and Roku, which would both seem to benefit from people not going to the movies,  weren’t immune to the stock market drop.

As of Friday, about 2,800 people have died from coronavirus and more than 83,000 cases have been confirmed, with most stemming from China.