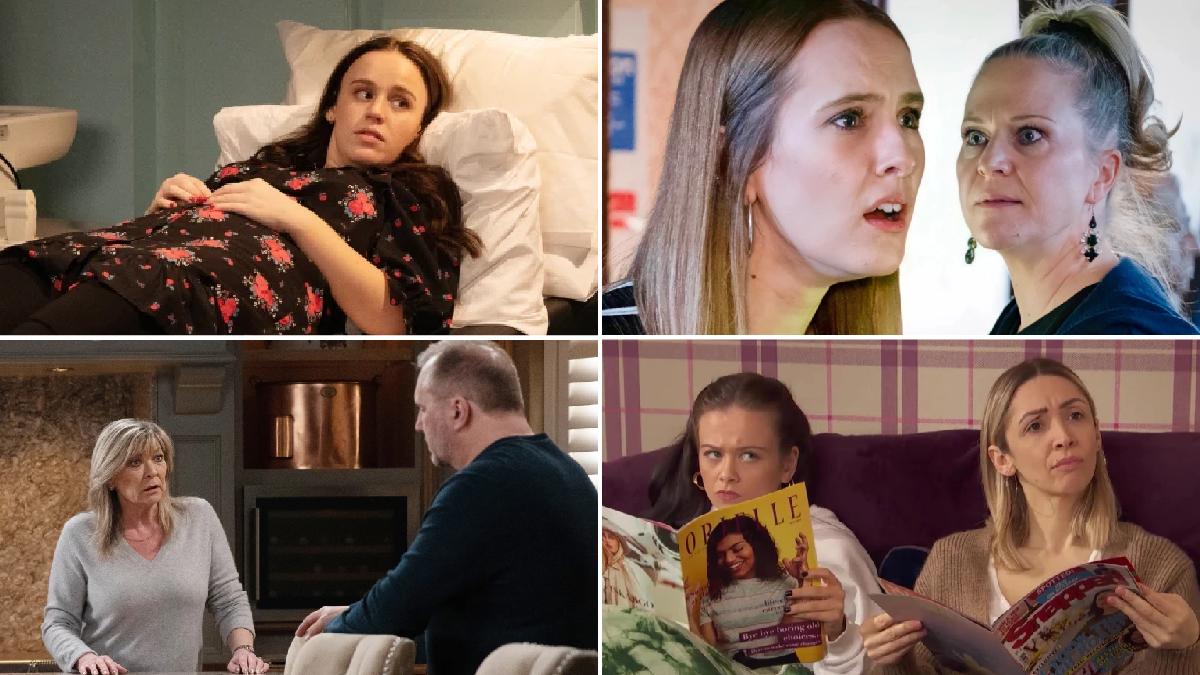 A major return, a sad death and an interesting surprise make for compelling viewing in the soaps next week.

Linda Carter storms back to the Square in an unmissable week of EastEnders drama, while Coronation Street’s Laura Neelan makes a heartfelt dying wish to Gary Windass.

Over in Emmerdale, Kim Tate receives a huge shock from Gabby Thomas, while Meena Jutla takes great glee in the thought of facing Manpreet Sharma in court.

Hollyoaks, meanwhile, sees Goldie discover a new talent, and James Nightingale has some making up to do!

It’s all kicking off in soapland, and if you fancy a first look at what’s to come, you’re in luck!

1. Gary visits Laura in hospital and is shocked by her deterioration. With tears in her eyes, Laura admits that she’d give anything to be able to hug Kelly one last time. Gary does his best to persuade Kelly to see her mum, just as the teen leaves with Maria for the hairdressing awards. But things take an upsetting turn, as Gary receives a call from the hospital, warning him that Laura has only hours left to live.

2. Toyah struggles to come to terms with the news about Imran and Abi, and thus she has to make some decisions regarding Elsie’s adoption. Abi, meanwhile, finds Toyah in the neonatal unit gazing at Alfie in his incubator.

3. Imran is forced to say an emotional goodbye to Elsie, but is later adamant that he will help Abi fight to keep her son. Toyah, however, could end up derailing his plan, as she reveals that social services have reported him to the Solicitors’ Regulation Authority for his involvement in Abi’s custody battle.

4. Jon shares his plans to open a beach bar in Australia but Emma is stunned to realise she visited the same beach as a kid. He suggests that she move to Australia with him, but matters are complicated when he later rocks up at her flat, leaving Faye in shock. But what will this mean for Faye, Craig and Emma?

5. A pale Faye emerges from the bathroom and tells Emma she thinks she is losing the baby. At the hospital, Caig and Faye await the scan results but are shocked by what they are told.

6. Beth and Sean reiterate how Fiz has finally landed on her feet. Fiz does her best to appear enthusiastic. Fiz calls at the garage and Tyrone finally admits how much he misses her and the girls

7. Nick concedes that he’s been overprotective of Sam and when Roy reveals that there’s a children’s chess tournament taking place, he agrees to let him take part. Sam’s thrilled to hear about the chess tournament, but when he reveals that he’d rather Roy take him, Nick has to hide his disappointment.

8. Linda waltzes back into Mick’s life on the day of Tina’s funeral. It doesn’t take long before they’re at each other’s throats, as she spots Janine, and comes to realise that she’s the very same woman who encouraged her to divorce Mick! The landlady causes a scene at the crematorium, and soon hits the bottle.

9. Linda makes her way to The Vic, where she confronts Janine, calling her out for what she did. Mick’s loyalties appear to lie with Janine, as he informs Janine that it’s she who he wants to be with when the divorce is finalised.

10. Zack ultimately decides skip the cooking competition so that he can support Nancy on the day of the funeral. Linda’s presence causes chaos, and thus Zack proves supportive. Nancy, however, instructs him to back off! There is more animosity to come, as Nancy finds out that Linda stayed the night at Sharon’s, but she soon discovers that Zack missed his competition for her, and therefore she’s riddled with guilt as a result.

11. Frankie catches Mick and Janine almost kissing. Afterwards, Linda turns up at the pub once more, and ultimately makes things worse for herself, as she confronts Frankie, and delivers some very harsh words. Mick puts his foot down and publicly kisses Janine.

12. Jean sets her sights on reuniting Rocky with his former flame, as she punctures Kathy’s tyre, before locking the duo in the car lot. The atmosphere between Kathy and Rocky eases, and Harvey comes to the rescue, freeing them from captivity.

13. Kathy isn’t pleased with Jean’s attitude when she learns what’s done. Rocky, however, is more forgiving but Jean mistakes his friendliness for flirtation, and she subsequently follows him into the toilets!

14. Billy embarrasses Will when he shouts over to Martin and Jada inviting them over to watch a film but Jada declines. Later, Honey tries to deter Will from liking Jada.

15. Meena is determined to walk free, but she also delights at the thought of putting on a show in court. Meena’s charm with the prison officers pay off as she receives a smuggled newspaper, excited to see herself on the front cover, and she savours the thought of facing her sister in court.

16. Manpreet decides to testify, accepting Ethan’s offer to help her prepare. Manpreet wonders what Meena is up to when Wendy is called as a witness for the defence.

17. Kim is seething when Hazel, Andrea’s mum, reveals that Millie is not attending Thomas’ christening. Certain that Hazel is up to something, she urges Gabby to delay the christening. The situation causes conflict, with Gabby refusing to postpone, but ultimately the duo agree to hold off until the following day. Gabby, however, has an extra special surprise in store for Kim.

18. Chloe and Nate get cosy in the pub, and one thing leads to another, as Chloe spends the night at Nate’s! Nate is embarrassed, doing his best to avoid Chloe, who wants to spend more time with him. Noah, meanwhile, catches Chloe heading home from Nate’s place. When she refuses to go for a drink with him, he’s angered by the lack of reward for his apology.

19. Al pays a little too much attention to Belle’s ideas and she’s unaware he’s trying to steal them as his own.

20. Vanessa bumps into Suzy. After a flirty interaction, Vanessa’s secretly pleased to have secured a dinner with her.

21. The friction between James and his family continues, with Juliet taking it the hardest. Later, Donna-Marie realises how bad James’ gambling has become, and his family stages an intervention, but is he ready to admit he needs help or will he lash out?

22. Goldie is convinced that a litter of acorns are a message from Sylver, and she discovers a spiritual talent. Luke and Tony are enjoying the peace and quiet, making rather extravagant plans for the former’s stag-do. Mercedes rocks up on the hunt for something, but it appears as if she gets distracted by Goldie’s plan to make contact with Sylver. Luke and Tony get dragged in the whole thing too, with the former finding it all rather funny.

23. The Chen-Williams’ search for friendship leads them to Damon and Liberty, but things turn sour as Honour and Liberty butt heads about Liberty’s hobbies.

24. Leela is forced to jump to Sid’s defence against Dave’s judgement, but a slip of the tongue reveals a dark moment in Sid’s past that he hadn’t told Lizzie. Sid plans a romantic gesture for Lizzie. When he injures himself rehearsing a scene from an infamous movie, will Lizzie see the intention behind it and hear him out?

25. Eric is looking for Verity once again. When Theresa accidentally spills a drink on him, it brings him face-to-face with Tony.