DI Neville (played by Ralf Little) became a pinnacle character of the Death in Paradise cast when he took over the main role from former islander, DI Jack Mooney (Ardal O’Hanlon), several weeks ago. However, his introduction to the BBC murder mystery drama didn’t go as smooth sailing as he’d hoped, with the newcomer believing he would be leaving Saint Marie after solving a seemingly impossible case. Unfortunately, his urge to return to the UK was thwarted when he came down with a case of deep vein thrombosis. As the season nine final aired this week, viewers were given the answer as to whether he would be sticking around and they weren’t complaining about the result.

After it was announced former Royale Family actor Ralf, 40, would be replacing Ardal, 54, it was unlikely the newcomer was only going to be on the show for a few weeks.

As the new lead detective, Neville would ways be staying in Saint Marie whether he liked it or not, but it didn’t stop script writer’s from having a little fun by leaving viewers on tenterhooks about a possible exit just weeks into his arrival.

During the finale of season 9 and following weeks of complaining he was going to have to stay in Saint Marie, the sleuth was given the all-clear to leave.

Considering his options and solving yet another case, the newcomer came to a decision about his future on the Caribbean Island. 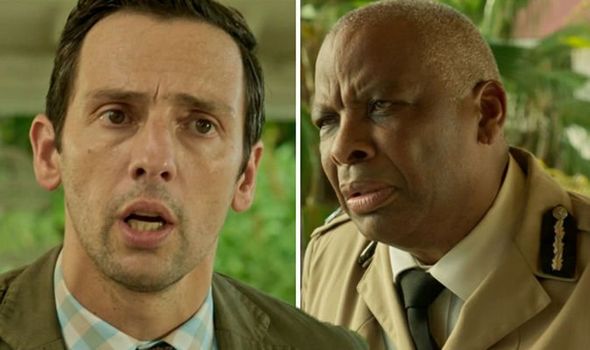 Joining his fellow team mates at a party to celebrate Officer JP Hooper’s (Tobi Bakare) achievement in becoming a Sergeant, the newcomer asked if he could stay.

Neville explained: “I’m fed up of living life the way I have to, instead of the way I want to,” before asking: “What I’m saying is I’d love to be your DI permanently if you’ll have me.”

The team were more than happy to welcome him to Saint Marie officially and by the end of the episode, he was finally settling into the surroundings of his new life.

Taking to Twitter following the news the detective would be staying, fans were in jubilation and sent the social media platform into meltdown.

Think he is great

Writing on the micro-blogging site, one wrote: “and he’s staying #DeathInParadise,” [sic] followed by a clapping hands emoji.

Another added: “Never watched #deathinparadise before @RalfLittle joined, decided to watch it as we both think he is great! Sad it’s finished but going to watch the whole thing from the beginning! So pleased Neville stayed.”

Whilst a third asked: “I quite like Neville & would be quite happy to have him back next series but with less allergies & chilled out a bit. Can he lose the jacket & tie as well please! #deathinparadise.”

A fourth commented: “Neville staying which means we get another series of #deathinparadise.”

It was announced last year Ralf would be taking over from Ardal, explaining he was delighted to be getting his teeth into a detective role.

Just week after his character was introduced, the newcomer was already setting his sights on what his alter-ego could get up to in season 10.

Speaking with Metro ahead of the finale, the actor explained he had “roughly four months” before production began on the new series.

“I want to get my French in order, obviously [Neville] speaks English but it would be nice to speak French on the island. So I have to work on my French,” he added.

Following the eight season finale last February, it was confirmed the show had been recommissioned for two more seasons at least.

With the current season being one of them, it means the next instalment of the murder mystery programme could be it’s last.

Executive Producer Tim Key said of the future of the show: “We’re excited to let the audience get to know our new characters better whilst also throwing some major surprises into the mix along the way – and of course solving the odd murder or sixteen.”

Viewers will have to wait to see if the programme is recommissioned for more years to come and with such a response to Neville’s arrival, it seems there could be legs to his story.

Death in Paradise season 9 is now available on BBC iPlayer.