In the mood for a true-crime story, and don’t mind losing a little faith in the health care system? Peacock’s got just the thing.

The streamer on Thursday released all eight episodes of its miniseries Dr. Death, starring The Affair‘s Joshua Jackson as Christopher Duntsch, a real-life neurosurgeon currently serving life in prison after maiming and killing multiple patients. (The ordeal was previously chronicled in a 2018 Wondery podcast, also titled Dr. Death.)

The premiere of Peacock’s adaptation lets us know right away that the story ends badly for Duntsch, as we glimpse Jackson’s version of the doc getting his blood pressure taken while wearing scrubs that read “Inmate.” His face appears bloated, his eyes are heavy-lidded, and he generally looks… terrible.

Five years earlier, though, Duntsch had just been hired at Dallas Medical Center in Texas, following a stint in Plano that Duntsch later says he left because the staff was underperforming, and he felt “boxed in” at that facility. “Hard to be the future at a place with no vision,” Duntsch tells a patient at one point, which accurately sums up the ego we see from him throughout the premiere.

One of Duntsch’s surgical patients during his first few weeks in Dallas is Madeline Beyer, who goes to Duntsch for a spinal fusion surgery. But Duntsch’s procedure leaves Madeline with even worse back pain and limited mobility, and a neurosurgeon named Robert Henderson (30 Rock‘s Alec Baldwin) must now complete a revision surgery to fix Duntsch’s mistakes. Fortunately, Madeline’s pain improves after the revision, but she can’t seem to move her left foot, and she tells Dr. Henderson that she never wants Duntsch to come near her again.

Later, Henderson speaks with the circulating nurse who was in the operating room during Duntsch’s initial surgery. The nurse, Josh, explains that Duntsch seemed to know what he should do during the operation, but then did the exact opposite. “Everyone in that room could have done better than him,” Josh reveals. 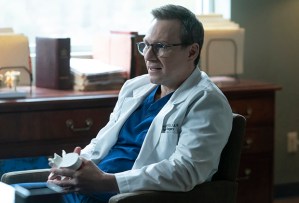 Henderson is then visited by vascular surgeon Randall Kirby (Mr. Robot‘s Christian Slater), who isn’t thrilled to hear that Duntsch was recently hired at their hospital. Kirby and Duntsch happened to work together months ago on a surgery in Plano — the same kind of spinal fusion surgery that Duntsch just botched on Madeline Beyer — and Kirby noticed Duntsch making puzzling requests for surgical instruments he shouldn’t have needed for this simple procedure, while the actual operation wasn’t carried out particularly gracefully. And Kirby would be willing to write that all off as human error… if Duntsch hadn’t later performed a number of other poorly executed surgeries, including one that left the patient quadriplegic, and another in which the patient died on his table.

An increasingly concerned Henderson notes that Duntsch performed two other surgeries at Dallas Medical that week aside from Madeline Beyer, one of which left the patient on life support after Duntsch sliced through her vertebral artery. And worse, he’s got more surgeries scheduled for the following week. “Are we going to sit here chatting, or we going to do something about it?” Kirby asks Henderson.

The rest of the premiere largely focuses on Duntsch, who we find is quite charming with his patients, but cocky, terse and mean to his colleagues in the operating room. When Dallas Medical’s CEO gently asks for details about one of his procedures, he gets defensive and begins listing his achievements and accolades. He strangely keeps wearing the same scrubs that have a tear in the left leg. And when we get to see what exactly happened during that week’s three surgeries at Dallas Medical, we find that the first operation took four hours when it should have been much shorter, and the second — which we know ultimately left the patient on life support — was chaotic and bloody, but Duntsch refused to heed the advice of his fellow OR doctors as his patient’s condition worsened. 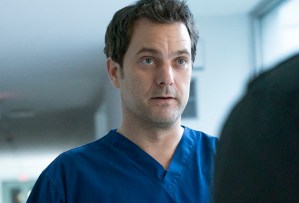 Duntsch also appears to be somewhat obsessed with a former colleague named Kim Morgan (Mr. Robot‘s Grace Gummer), who spots Duntsch parked outside her house one night. She tells him to get lost — she has a court order against him, after all — but she’s even more stunned to hear that Duntsch is still operating on patients somewhere. “After what you did?” she says. “To your patients, to Jerry…” We don’t learn who Jerry is just yet, but Duntsch stops her there, telling her she’s the one who abandoned her patients and responsibilities when she left her job. “Come back here again, and you’re going to jail,” Kim warns.

Later in the week, Kirby and Henderson call up a doctor who previously worked with Duntsch in Memphis. The doc says Duntsch’s performance was satisfactory, and he had an unparalleled work ethic; when Kirby and Henderson fax him a photo of Duntsch to confirm they’re discussing the same man, he says that is the Duntsch he remembers.

“Did you know?” Henderson asks the man. “Did you know what he was capable of?” And as Duntsch goes in for another surgery, we hear his onetime colleague respond, “No.”

OK, your turn! What did you think of Dr. Death‘s first episode? Cast your votes in our polls below, then hit the comments with your full reviews!