Last year, football fans tuned in to see Lee Mack take a penalty for England, but Nicky Byrne saved the goal and it was all over as Rest Of the World won the match. Despite the defeat resting on his shoulders, Lee is back taking part in this year’s match and spoke to GMB about his participation. When showing the viewers the coveted winner’s trophy, he let it slip out of his hands and it tumbled onto the floor.

“Beginning of June, Old Trafford when you lift the trophy for England,” Ben suggested as Kate added: “Could you do it?

“Listen with me around, what could possibly go wrong?” Lee then slung the silver plate over his shoulder adding: “That’s how you do comedy.”

Kate gasped and Ben just laughed in response before stating: “It’s not the trophy I’m worried about it’s the set.”

“That is a heavy trophy! Our director is having a small fit, I’m so sorry, it’s fine, the set is fine,” Kate reassured viewers. 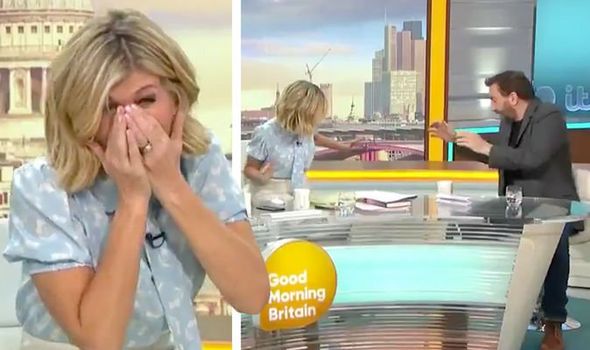 “We will put details of how you can get the tickets – don’t drop it again,” Ben warned their guest but Lee argued: “It’s only funny the second time around!”

“Do it again!” Kate joked but Ben continued: “Can we just say, spin round, the team from Unicef are in and they are absolutely panicking. Lee stop it.”

“Please stop,” Kate added, but Lee was on a roll as he continued: “Oh look you can see the reflection of all your cameras, look at that, you can see your autocue look at that! We thought you were making all of this up – you liars!”

He then went onto speak about the upcoming match but made another blunder which Ben couldn’t help but comment on. 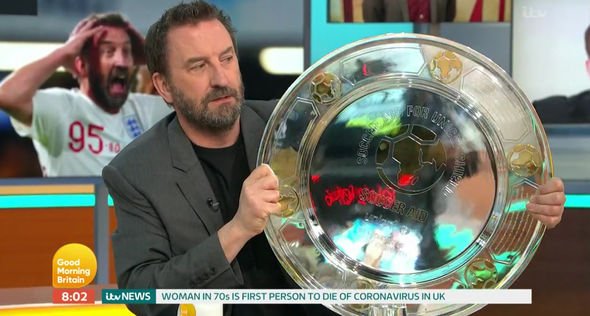 Lee tried to read out the website which was where viewers could buy tickets for the match, but messed up when trying to say the url.

“It’s like watching you take a penalty,” Kate remarked in reference to what happened last year.

After apologising, Lee told viewers just to search for the match itself and laughed off the presenter’s comments.

The majority of those watching at home saw how it was all part of a big joke and took to Twitter to comment.

“@GMB and @LeeMack This is just the sort of happy distraction we need,” one remarked. 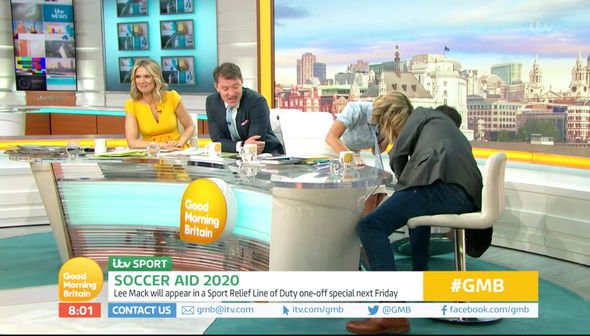 However some didn’t find it humorous: “@GMB and @LeeMack Not funny. Utterly disrespectful.”

“How disrespectful @GMB,” another commented.

It comes after yesterday’s show when ITV viewers tuned in to see Susanna Reid clash with a guest.

During one of the coronavirus debates, the show was discussing self-isolation and stockpiling.

Good Morning Britain airs weekday mornings at 6am on ITV.